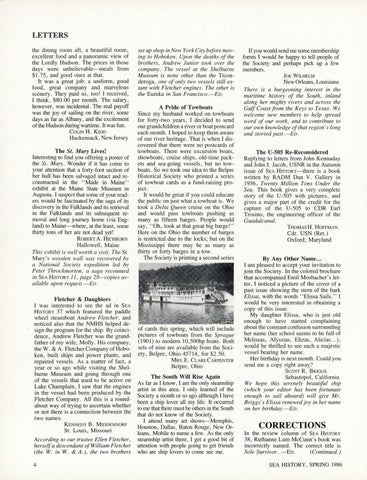 LETTERS the dining room aft, a beautiful room, excellent food and a panoramic view of the Lordly Hudson. The prices in those days were unbelievable-meals from $1. 7 5, and good ones at that. It was a great job: a uniform, good food, great company and marvelous scenery . They paid us, too! I received, I think , $80.00 per month. The salary, however, was incidental. The real payoff was the joy of sailing on the river, some days as far as Albany, and the excitement of the Hudson during wartime. It was fun . COLIN H. KIDD Hackensack, New Jersey

The St. Mary Lives! Interesting to find you offering a poster of the St. Mary . Wonder if it has come to your attention that a forty-foot section of her hull has been salvaged intact and reconstructed in the &quot;Made in Maine&quot; exhibit at the Maine State Museum in Augusta. I suspect that some of your readers would be fascinated by the saga of its discovery in the Falklands and its retrieval in the Falklands and its subsequent removal and long journey home (via England) to Maine-where, at the least, some thirty tons of her are not dead yet! ROBERT A. HlCHBORN Hallowell , Maine This exhibit is well worth a visit . The St. Mary &#39;s wooden wall was recovered by a National Society expedition led by Peter Throckmorton, a saga recounted in SEA HISTORY 11 &#39; page 28-copies available upon request.-Eo.

Fletcher &amp; Daughters I was interested to see the ad in SEA HISTORY 37 which featured the paddle wheel steamboat Andrew Fletcher, and noticed also that the NMHS helped design the program for the ship. By coincidence, Andrew Fletcher was the grandfather of my wife, Molly . His company, the W. &amp; A. Fletcher Company of Hoboken, built ships and power plants, and repaired vessels. As a matter of fact, a year or so ago while visiting the Shelburne Museum and going through one of the vessels that used to be active on Lake Champlain, I saw that the engines in the vessel had been produced by the Fletcher Company. All this is a roundabout way of trying to ascertain whether or not there is a connection between the two names . KENNEDY B. MIDDENDORF St. Louis, Missouri According to our trustee Ellen Fletcher, herself a descendant of William Fletcher (the W. in W. &amp; A.), the two brothers 4

set up shop in New York City before moving to Hoboken . Upon the deaths of the brothers, Andrew Junior took over the company. The vessel at the Shelburne Museum is none other than the Ticonderoga, one of only two vessels still extant with Fletcher engines. The other is the Eureka in San Francisco. - ED .

A Pride of Towboats Since my husband worked on towboats for forty-two years, I decided to send our grandchildren a river or boat postcard each month . I hoped to keep them aware of our river heritage . That is when I discovered that there were no postcards of towboats . There were excursion boats, showboats, cruise ships, old-time packets and sea-going vessels , but no towboats. So we took our idea to the Belpre Historical Society who printed a series of towboat cards as a fund-raising project. It would be great if you could educate the public on just what a towboat is . We took a Delta Queen cruise on the Ohio and would pass towboats pushing as many as fifteen barges. People would say, &quot;Oh, look at that great big barge!&quot; Here on the Ohio the number of barges is restricted due to the locks; but on the Mississippi there may be as many as thirty or forty barges in a tow . The Society is printing a second series

The South Will Rise Again As far as I know, I am the only steamship artist in this area. I only learned of the Society a month or so ago although I have been a ship lover all my life. It occurred to me that there must be others in the South that do not know of the Society. I attend many art shows-Memphis, Houston, Dallas, Baton Rouge, New Orleans, Mobile to name a few . As the only steamship artist there, I get a good bit of attention with people going to get friends who are ship lovers to come see me.

If you would send me some membership forms I would be happy to tell people of the Society and perhaps pick up a few members . JOE WILHELM New Orleans, Louisiana There is a burgeoning interest in the maritime history of the South, inland along her mighty rivers and across the Gulf Coastfrom the Keys to Texas. We welcome new members to help spread word of our work, and to contribute to our own knowledge of that region&#39; s long and storied past .-Eo .

The U-505 Re-Reconsidered Replying to letters from John Kennaday and John J . Jacob, USNR in the Autumn issue of SEA HISTORY-there is a book written by RADM Dan V. Gallery in 1956, Twenty Million Tons Under the Sea . This book gives a very complete story of the U-505 with pictures, and gives a major part of the credit for the capture of the U-505 to CDR Earl Trosino, the engineering officer of the Guadalcanal . THOMASH . HOFFMAN , Cdr. USN (Ret.) Oxford, Maryland

By Any Other Name ... I am pleased to accept your invitation to join the Society . In the colored brochure that accompanied Emil Mosbacher&#39;s letter, I noticed a picture of the cover of a past issue showing the stem of the bark Elissa, with the words &quot;Elissa Sails .&quot; I would be very interested in obtaining a copy of this issue. My daughter Elissa, who is just old enough to have started complaining about the constant confusion surrounding her name (her school seems to be full of Melissas, Alyssias, Elizas, Alicias ... ) , would be thrilled to see such a majestic vessel bearing her name. Her birthday is next month . Could you send me a copy right away? SCOTT R. BRIGGS Sebastopol, California We hope this serenely beautiful ship (which your editor has been fortunate enough to sail aboard) will give Mr. Briggs&#39;s Elissa renewed joy in her name on her birthday.-Eo .