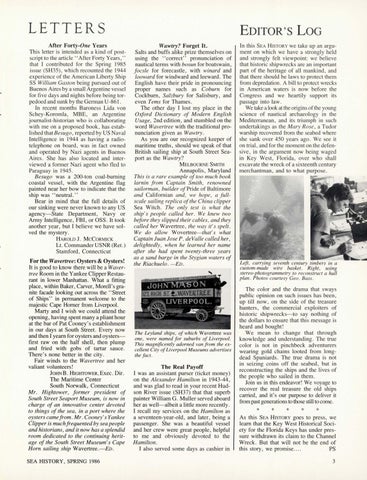 LETTERS After Forty-One Years This letter is intended as a kind of postscript to the article &quot; After Forty Years, &quot; that I contributed for the Spring 1985 issue (SH35), which recounted the 1944 experience of the American Liberty Ship SS William Gaston being pursued out of Buenos Aires by a small Argentine vessel for five days and nights before being torpedoed and sunk by the German U-861. In recent months Baroness Lida von Schey-Koromla, MBE , an Argentine journalist-historian who is collaborating with me on a proposed book , has established that Besugo , reported by US Naval Intelligence in 1944 as having a radiotelephone on board , was in fact owned and operated by Nazi agents in Buenos Aires . She has also located and interviewed a former Nazi agent who fled to Paraguay in 1945. Besugo was a 200-ton coal-burning coastal vessel, with the Argentine flag painted near her bow to indicate that the ship was &quot;neutral.&quot; Bear in mind that the full details of our sinking were never known to any US agency-State Department , Navy or Army Intelligence, FBI, or OSS. It took another year, but I believe we have solved the mystery . HAROLD J . McCORMICK Lt. Commander USNR (Ret.) Stamford, Connecticut For the Wavertree: Oysters &amp; Oysters! It is good to know there will be a Wavertree Room in the Yankee Clipper Restaurant in lower Manhattan. What a fitting place, within Baker, Carver, Morell&#39;s granite facade looking out across the &quot;Street of Ships&quot; in permanent welcome to the majestic Cape Horner from Liverpool. Marty and I wish we could attend the opening, having spent many a pliant hour at the bar of Pat Cooney&#39; s establishment in our days at South Street. Every now and then I yearn for oysters and oystersfirst raw on the half shell, then plump and fried with gobs of tartar sauce. There&#39;s none better in the city. Fair winds to the Wavertree and her valiant volunteers! JOHNB. HIGHTOWER, Exec. Dir. The Maritime Center South Norwalk , Connecticut Mr . Hightower , former president of South Street Seaport Museum, is now in charge of an innovative center devoted to things of the sea, in a port where the oysters came from. Mr . Cooney&#39; s Yankee Clipper is much frequented by sea people and historians, and it now has a splendid room dedicated to the continuing heritage of the South Street Museum&#39;s Cape Horn sailing ship Wavertree.-ED. SEA HISTORY , SPRING 1986

EDITOR&#39;S LOG Wawtry? Forget It. Salts and buffs alike prize themselves on using the &quot;correct&quot; pronunciation of nautical terms with bosun for boatswain, focsle for forecastle , with winard and looward for windward and leeward. The English have their pride in pronouncing proper names such as Coburn for Cockburn, Salzbury for Salisbury, and even T ems for Thames. The other day I lost my place in the Oxford Dictionary of Modern English Usage, 2nd edition, and stumbled on the word Wavertree with the traditional pronunciation given as Wawtry. As you are our recognized keeper of maritime truths, should we speak of that British sailing ship at South Street Seaport as the Wawtry? MELBOURNE SMITH Annapolis , Maryland This is a rare example of too much book larnin from Captain Smith , renowned sailorman, builder of Pride of Baltimore and Californian and, we hope, a fullscale sailing replica of the China clipper Sea Witch. The only test is what the ship&#39;s people called her. We knew two before they slipped their cables, and they called her Wavertree, the way it&#39;s spelt. We do allow Wovertree- that&#39; s what Captain Juan Jose P . de Valle called her, delightedly , when he learned her name after she had spent twenty-three years as a sand barge in the Stygian waters of the Riachuelo. -ED.

The Leyland ships, of which Wavertree was one, were named for suburbs of Liverpool. This magnificently adorned van from the excellent City of Liverpool Museums advertises the fact.

The Real Payoff I was an assistant purser (ticket money) on the Alexander Hamilton in 1943-44 , and was glad to read in your recent Hudson River issue (SH37) that that superb painter William G. Muller served aboard her as well-albeit a little more recently. I recall my services on the Hamilton as a seventeen-year-old, and later, being a passenger. She was a beautiful vessel and her crew were great people, helpful to me and obviously devoted to the Hamilton. I also served some days as cashier in

In this SEA HISTORY we take up an argument on which we have a strongly held and strongly felt viewpoint: we believe that historic shipwrecks are an important part of the heritage of all mankind, and that there should be laws to protect them from depredation. A bill to protect wrecks in American waters is now before the Congress and we heartily support its passage into law. We take a look at the origins of the young science of nautical archaeology in the Mediterranean, and its triumph in such undertakings as the Mary Rose, a Tudor warship recovered from the seabed where she sank over 450 years ago. We see it on trial , and for the moment on the defensive, in the argument now being waged in Key West , Florida, over who shall excavate the wreck of a sixteenth century merchantman, and to what purpose .

The color and the drama that sways public opinion on such issues has been, up till now , on the side of the treasure hunters, the commercial exploiters of historic shipwrecks-to say nothing of the dollars to ensure that this message is heard and bought! We mean to change that through knowledge and understanding. The true color is not in pinchbeck adventurers wearing gold chains looted from longdead Spaniards. The true drama is not in seizing coins off the seabed, but in reconstructing the ships and the lives of the people who sailed in them . Join us in this endeavor! We voyage to recover the real treasure the old ships carried, and it&#39;s our purpose to deliver it from past generations to those still to come.

As this SEA HISTORY goes to press, we learn that the Key West Historical Society for the Florida Keys has under pressure withdrawn its claim to the Channel Wreck . But that will not be the end of this story, we promise. ... PS 3