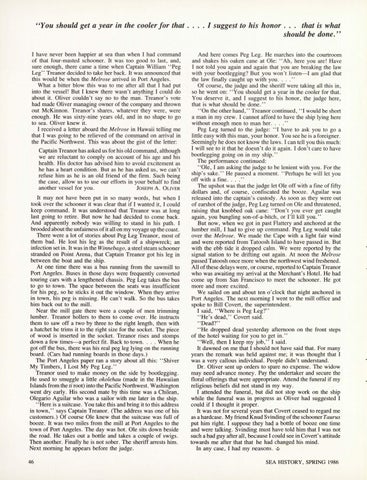 "You should get a year in the cooler for that . . . . I suggest to his honor . . . that is what should be done." I have never been happier at sea than when I had command of that four-masted schooner. It was too good to last, and , sure enough , there came a time when Captain William " Peg Leg" Treanor decided to take her back. It was announced that this would be when the Melrose arrived in Port Angeles. What a bitter blow this was to me after all that I had put into the vessel! But I knew there wasn't anything I could do about it. Oliver couldn 't say no to the man . Treanor's vote had made Oliver managing owner of the company and thrown out McKinnon. Treanor' s shares , whatever they were, were enough . He was sixty-nine years old , and in no shape to go to sea. Oliver knew it. I received a letter aboard the Melrose in Hawaii telling me that I was going to be relieved of the command on arrival in the Pacific Northwest. This was about the gist of the letter: Captain Treanor has asked us for his old command , although we are reluctant to comply on account of his age and his health . His doctor has advised him to avoid excitement as he has a heart condition. But as he has asked us, we can 't refuse him as he is an old friend of the firm . Such being the case , allow us to use our efforts in your behalf to find another vessel for you . JOSEPH A. OLIVER It may not have been put in so many words , but when I took over the schooner it was clear that if I wanted it, I could keep command . It was understood that Treanor was at long last going to retire . But now he had decided to come back. And apparently nobody was willing to stand in his path . I brooded about the unfairness of it all on my voyage up the coast. There were a lot of stories about Peg Leg Treanor, most of them bad . He lost his leg as the result of a shipwreck; an infection set in. It was in the Winnebago, a steel steam schooner stranded on Point Arena, that Captain Treanor got his leg in between the boat and the ship . At one time there was a bus running from the sawmill to Port Angeles . Buses in those days were frequentl y converted touring cars with a lengthened chassis. Peg Leg takes the bus to go to town . The space between the seats was insufficient for his peg , so he sticks it out the window . When they arrive in town, his peg is missing. He can' t walk. So the bus takes him back out to the mill . Near the mill gate there were a couple of men trimming lumber. Treanor hollers to them to come over. He instructs them to saw off a two by three to the right length , then with a hatchet he trims it to the right size for the socket. The piece of wood is inserted in the socket. Treanor rises and stomps down a few times-a perfect fit. Back to town . ... When he got off the bus, there was his real peg leg lying on the running board . (Cars had running boards in those days.) The Port Angeles paper ran a story about all this : "Shiver My Timbers , I Lost My Peg Leg." Treanor used to make money on the side by bootlegging. He used to smuggle a little okolehau (made in the Hawaiian Islands from the ti root) into the Pacific Northwest. Washington went dry early. His second mate by this time was a Chilean, Olegario Aguilar who was a sailor with me later in the ship. '' Here is a suitcase. You take this and bring it to this address in town ," says Captain Treanor. (The address was one of his customers .) Of course Ole knew that the suitcase was full of booze. It was two miles from the mill at Port Angeles to the town of Port Angeles. The day was hot. Ole sits down beside the road . He takes out a bottle and takes a couple of swigs. Then another. Finally he is not sober. The sheriff arrests him . Next morning he appears before the judge.

And here comes Peg Leg. He marches into the courtroom and shakes his oaken cane at Ole: " Ah , here you are! Have I not told you again and again that you are breaking the law with your bootlegging? But you won ' t listen-I am glad that the law finally caught up with you . .. . " Of course, the judge and the sheriff were taking all this in, so he went on: "You should get a year in the cooler for that. You deserve it, and I suggest to his honor, the judge here , that is what should be done." " On the other hand, " Treanor continued, " I would be short a man in my crew. I cannot afford to have the ship lying here without enough men to man her. ... " Peg Leg turned to the judge: "I have to ask you to go a little easy with this man , your honor. You see he is a foreigner . Seemingly he does not know the laws. I can tell you this much: I will see to it that he doesn't do it again. I don't care to have bootlegging going on in my ship. " The performance continued: "Ole, I am asking the judge to be lenient with you. For the ship ' s sake. " He paused a moment. "Perhaps he will let you off with a fine .... " The upshot was that the judge let Ole off with a fine of fifty dollars and , of course , confiscated the booze. Aguilar was released into the captain ' s custody. As soon as they were out of earshot of the judge, Peg Leg turned on Ole and threatened, raising that knobbed oak cane: "Don't you ever get caught again, you bungling son-of-a-bitch , or I'll kill you ." But now , when we got in past Flattery and anchored at the lumber mill , I had to give up command. Peg Leg would take over the Melrose. We made the Cape with a light fair wind and were reported from Tatoosh Island to have passed in. But with the ebb tide it dropped calm. We were reported by the signal station to be drifting out again. At noon the Melrose passed Tatoosh once more when the northwest wind freshened. All of these delays were, or course, reported to Captain Treanor who was awaiting my arrival at the Merchant's Hotel. He had come up from San Francisco to meet the schooner. He got more and more excited. We sailed on and about ten o'clock that night anchored in Port Angeles. The next morning I went to the mill office and spoke to Bill Covert , the superintendent. I said, " Where is Peg Leg?" " He 's dead ," Covert said . ''Dead?'' ''He dropped dead yesterday afternoon on the front steps of the hotel waiting for you to get in ." " Well , then I keep my job," I said. It dawned on me that I should not have said that. For many years the remark was held against me; it was thought that I was a very callous individual. People didn ' t understand . Dr. Oliver sent up orders to spare no expense. The widow may need advance money. Pay the undertaker and secure the floral offerings that were appropriate . Attend the funeral if my religious beliefs did not stand in my way. I attended the funeral , but did not stop work on the ship while the funeral was in progress as Oliver had suggested I could if I thought it proper. It was not for several years that Covert ceased to regard me as a hardcase . My friend Knud Svinding of the schooner Taurus put him right. I suppose they hag a bottle of booze one time and were talking. Svinding must have told him that I was not such a bad guy after all, be1r:ause I could see in Covert's attitude towards me after that that he had changed his mind . In any case , I had my neasons . .t SEA HISTORY , SPRING 1986