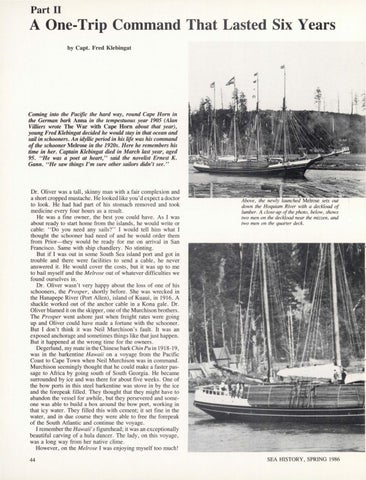 Coming into the Pacific the hard way, round Cape Hom in the German bark Anna in the tempestuous year 1905 (Alan Villiers wrote The War with Cape Horn about that year), young Fred Klebingat decided he would stay in that ocean and sail in schooners. An idyllic period in his life was his command of the schooner Melrose in the 1920s. Here he remembers his time in her. Captain Klebingat died in March last year, aged 95. &quot;He was a poet at heart,&quot; said the novelist Ernest K. Gann. &quot;He saw things I&#39;m sure other sailors didn&#39;t see.&quot;

Dr. Oliver was a tall , skinny man with a fair complexion and a short cropped mustache . He looked like you&#39;d expect a doctor to look. He had had part of his stomach removed and took medicine every four hours as a result. He was a fine owner, the best you could have . As I was about ready to start home from the islands, he would write or cable: &quot;Do you need any sails?&quot; I would tell him what I thought the schooner had need of and he would order them from Prior-they would be ready for me on arrival in San Francisco. Same with ship chandlery. No stinting . But if I was out in some South Sea island port and got in trouble and there were facilities to send a cable, he never answered it. He would cover the costs, but it was up to me to bail myself and the Melrose out of whateverÂˇ difficulties we found ourselves in. Dr. Oliver wasn&#39;t very happy about the loss of one of his schooners, the Prosper, shortly before. She was wrecked in the Hanapepe River (Port Allen), island of Kuaui , in 1916. A shackle worked out of the anchor cable in a Kona gale. Dr. Oliver blamed it on the skipper, one of the Murchison brothers. The Prosper went ashore just when freight rates were going up and Oliver could have made a fortune with the schooner. But I don &#39; t think it was Neil Murchison&#39;s fault. It was an exposed anchorage and sometimes things like that just happen . But it happened at the wrong time for the owners. Degerlund, my mate in the Chinese bark Chin Pu in 1918-19, was in the barkentine Hawaii on a voyage from the Pacific Coast to Cape Town when Neil Murchison was in command. Murchison seemingly thought that he could make a faster passage to Africa by going south of South Georgia . He became surrounded by ice and was there for about five weeks. One of the bow ports in this steel barkentine was stove in by the ice and the forepeak filled. They thought that they might have to abandon the vessel for awhile, but they persevered and someone was able to build a box around the bow port, working in that icy water. They filled this with cement; it set fine in the water, and in due course they were able to free the forepeak of the South Atlantic and continue the voyage. I remember the Hawaii&#39;s figurehead; it was an exceptionally beautiful carving of a hula dancer. The lady , on this voyage, was a long way from her native clime. However, on the Melrose I was enjoying myself too much! 44

Above, the newly launched Melrose sets out down the Hoquiam River with a deck.load of lumber. A close-up of the photo, below, shows two men on the deck.load near the mizzen, and two men on the quarter deck.