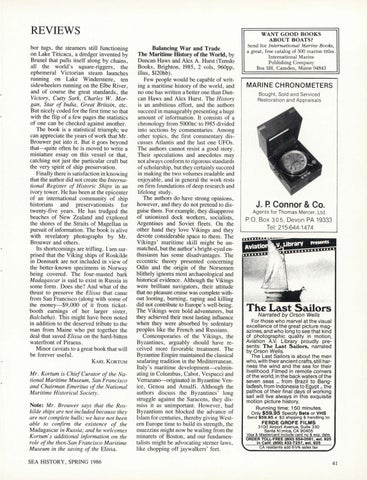 REVIEWS bor tugs, the steamers still functioning on Lake Titicaca, a dredger invented by Brunel that pulls itself along by chains, all the world's square-riggers , the ephemeral Victorian steam launches running on Lake Windermere, ten sidewheelers running on the Elbe River, and of course the great standards, the Victory, Cutty Sark, Charles W . Morgan, Star of India , Great Britain, etc. But nicely coded for the first time so that with the flip of a few pages the statistics of one can be checked against another. The book is a statistical triumph ; we can appreciate the years of work that Mr. Brouwer put into it. But it goes beyond that-quite often he is moved to write a miniature essay on this vessel or that, catching not just the particular craft but the very spirit of ship preservation. Finally there is satisfaction in knowing that the author did not create the I nternational Register of Historic Ships in an ivory tower. He has been at the epicenter of an international community of ship historians and preservationists for twenty-five years . He has trudged the beaches of New Zealand and explored the shores of the Straits of Magellan in pursuit of information. The book is alive with revelatory photographs by Mr. Brouwer and others . Its shortcomings are trifling . I am surprised that the Viking ships of Roskilde in Denmark are not included in view of the better-known specimens in Norway being covered . The four-masted bark Madagascar is said to exist in Russia in some form . Does she? And what of the thrust to preserve the Elissa that came from San Francisco (along with some of the money-$9,000 of it from ticketbooth earnings of her larger sister, Balclutha) . This might have been noted in addition to the deserved tribute to the man from Maine who put together the deal that saved Elissa on the hard-bitten waterfront of Piraeus . Minor caveats to a great book that will be forever useful. KARL KORTUM

Mr . Kortum is Chief Curator of the National Maritime Museum, San Francisco and Chairman Emeritus of the National Maritime Historical Society. Note: Mr . Brouwer says that the Roskilde ships are not included because they are not complete hulls; we have not been able to confirm the existence of the Madagascar in Russia; and he welcomes Kortum' s additional information on the role of the then-San Francisco Maritime Museum in the saving of the Elissa. SEA HISTORY , SPRING 1986

Balancing War and Trade The Maritime History of the World, by Duncan Haws and Alex A. Hurst (Teredo Books, Brighton, 1985, 2 vols , 960pp , illus, $120hb) . Few people would be capable of writing a maritime history of the world , and no one has written a better one than Duncan Haws and Alex Hurst. The History is an ambitious effort, and the authors succeed in manageably presenting a huge amount of information. It consists of a chronology from 5000Bc to 1985 divided into sections by commentaries. Among other topics, the first commentary discusses Atlantis and the last one UFOs. The authors cannot resist a good story . Their speculations and anecdotes may not always conform to rigorous standards of scholarship, but they certainly succeed in making the two volumes readable and enjoyable , and in general the work rests on firm foundations of deep research and lifelong study . The authors do have strong opinions , however, and they do not pretend to disguise them. For example, they disapprove of unionized dock workers, socialists, Argentines and Soviet fleets. On the other hand they love Vikings and they devote considerable space to them. The Vikings' maritime skill might be unmatched, but the author's bright-eyed enthusiasm has some disadvantages . The eccentric theory presented concerning Odin and the origin of the Norsemen blithely ignores most archaeological and historical evidence. Although the Vikings were brilliant navigators, their attitude that no pleasure cruise was complete without looting , burning, raping and killing did not contribute to Europe's well-being. The Vikings were bold adventurers, but they achieved their most lasting influence when they were absorbed by sedentary peoples like the French and Russians. Contemporaries of the Vikings, the Byzantines, arguably should have received more favorable treatment. The Byzantine Empire maintained the classical seafaring tradition in the Mediterranean . Italy's maritime development-culminating in Columbus, Cabot, Vespucci and Verrazano--0riginated in Byzantine Venice, Genoa and Amalfi . Although the authors discuss the Byzantines' long struggle against the Saracens , they dismiss it as unimportant. However, had Byzantium not blocked the advance of Islam for centuries, thereby giving Western Europe time to build its strength, the muezzins might now be wailing from the minarets of Boston , and our fundamentalists might be advocating sterner laws , like chopping off jaywalkers' feet.

The Last Sailors Narrated by Orson Wells For those who marvel at the visual excellence of the great picture magazines, and who long to see that kind of photographic quality in motion, Aviation A.V. Library proudly presents: The Last Sailors, narrated by Orson Wells. The Last Sailors is about the men who, with their ancient crafts, still harness the wind and the sea for their livelihood. Filmed in remote corners of the world, in the back waters of the seven seas ... from Brazil to Banglad'esh, from Indonesia to Egypt ... the pathos of their final days of working sail will live always in this exquisite motion picture history. Running time: 150 minutes. Only $59.95 Specify Beta or VHS Send $59.95 .i- $3 shipping & handling to: