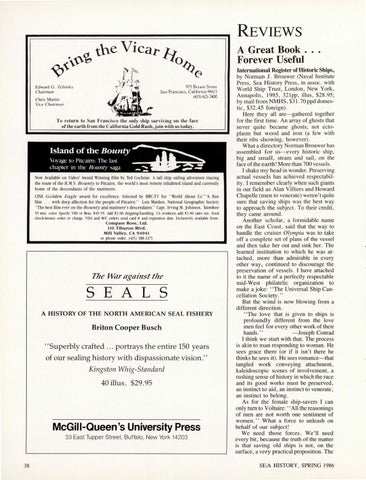 To return to San Frandsrn the on ly ship surviving on the face of the earth from the California Gold Rush, join with us today.

The War against the

Press, Sea History Press, in assoc. with World Ship Trust, London, New York, Annapolis, 1985 , 32lpp, illus, $28.95; by mail from NMHS , $31. 70 ppd domestic, $32.45 foreign) . Here they all are-gathered together for the first time . An array of ghosts that never quite became ghosts; not ectoplasm but wood and iron (a few with their ribs s howing , however) . What a directory Norman Brouwer has assembled for us--every historic ship, big and small , steam and sail, on the face of the earth! More than 700 vessels. I shake my head in wonder. Preserving actual vessels has achieved respectability . I remember clearly when such giants in our field as Alan Villiers and Howard Chapelle (men to venerate) weren't quite sure that sav ing ships was the best way to approach the subject . To their credit, they came around. Another scholar , a formidable name on the East Coast, said that the way to handle the cruiser Olympia was to take off a complete set of plans of the vessel and then take her out and sink her. The learned institution to which he was attached, more than admirable in every other way, continued to discourage the preservation of vessels. I have attached to it the name of a perfectly respectable mid-West philatelic organization to make a joke: '' The Universal Ship Cancellation Society. " But the wind is now blowing from a different direction . " The love that is given to ships is profoundly different from the love men feel for every other work of their hands ." - Joseph Conrad I think we start with that. The process is akin to man responding to woman . He sees grace there (or if it isn ' t there he thinks he sees it). He sees romance-that tangled work conveying attachment, kaleidoscopic scenes of involvement, a rushing sense of history in which the race and its good works must be preserved, an instinct to aid, an instinct to venerate, an instinct to belong . As for the female ship-savers I can only tum to Voltaire: '' All the reasonings of men are not worth one sentiment of women. '' What a force to unleash on behalf of our subject! We need those forces . We' ll need every bit, because the truth of the matter is that saving old ships is not, on the surface, a very practical proposition . The SEA HISTORY , SPRING 1986