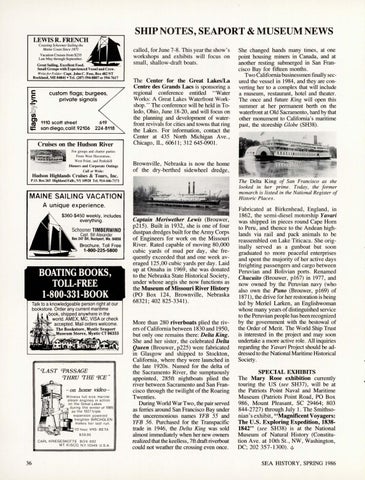 Cruises on the Hudson River For groups and chaner parties From West Haverstraw, West Point, and Peekskill

SHIP NOTES, SEAPORT & MUSEUM NEWS called , for June 7-8 . This year the show 's workshops and exhibits will focus on small , shallow-draft boats. The Center for the Great Lakes/La Centre des Grands Lacs is sponsoring a regional conference entitled "Water Works: A Great Lakes Waterfront Workshop." The conference will be held in Toledo, Ohio, June 18-20, and will focus on the planning and development of waterfront revivals for cities and towns that ring the Lakes. For information, contact the Center at 435 North Michigan Ave., Chicago, IL, 60611 ; 312 645-0901.

Brownville, Nebraska is now the home of the dry-berthed sidewheel dredge, ~

The Delta King of San Francisco as she looked in her prime. Today, the former monarch is listed in the National Register of Historic Places.

She changed hands many times, at one point housing miners in Canada, and at another resting submerged in San Francisco Bay for fifteen months. Two California businessmen finally secured the vessel in 1984, and they are converting her to a complex that will include a museum, restaurant, hotel and theater. The once and future King will open this summer at her permanent berth on the waterfront at Old Sacramento, hard by that other monument to California's maritime past, the storeship Globe (SH38) .

Captain Meriwether Lewis (Brouwer, p215) . Built in 1932, she is one of four dustpan dredges built for the Anny Corps of Engineers for work on the Missouri River. Rated capable of moving 80,000 cubic yards of mud per day , she frequently exceeded that and one week averaged 125 ,00 cubic yards per day . Laid up at Omaha in 1969 , she was donated to the Nebraska State Historical Society, under whose aegis she now functions as the Museum of Missouri River History (PO Box 124, Brownville, Nebraska 68321 ; 402 825-3341) .

More than 280 riverboats plied the rivers of California between 1830and1950, but only one remains there: Delta King. She and her sister, the celebrated Delta Queen (Brouwer, p225) were fabricated in Glasgow and shipped to Stockton, California, where they were launched in the late 1920s. Named for the delta of the Sacramento River, the sumptuously appointed , 285ft nightboats plied the river between Sacramento and San Francisco through the twilight of the Roaring Twenties. During World War Two, the pair served as ferries around San Francisco Bay under the unceremonious names YFB 55 and YFB 56. Purchased for the Transpacific trade in 1946, the Delta King was sold almost immediately when her new owners realized that the keelless, 7ft draft riverboat could not weather the crossing even once.

Fabricated at Birkenhead , England , in 1862, the semi-diesel motorship Yavari was shipped in pieces round Cape Hom to Peru , and thence to the Andean highlands via rail and pack animals to be reassembled on Lake Titicaca. She originally served as a gunboat but soon graduated to more peaceful enterprises and spent the majority of her active days freighting passengers and cargo between Peruvian and Bolivian ports . Renamed Chucuito (Brouwer, pl67) in 1977 , and now owned by the Peruvian navy (who also own the Puno (Brouwer, pl69) of 1871), the drive for her restoration is being led by Meriel Larken , an Englishwoman whose many years of distinguished service to the Peruvian people has been recognized by the government with the bestowal of the Order of Merit. The World Ship Trust is interested in the project and may soon undertake a more active role. All inquiries regarding the Yavari Project should be addressed to the National Maritime Historical Society.