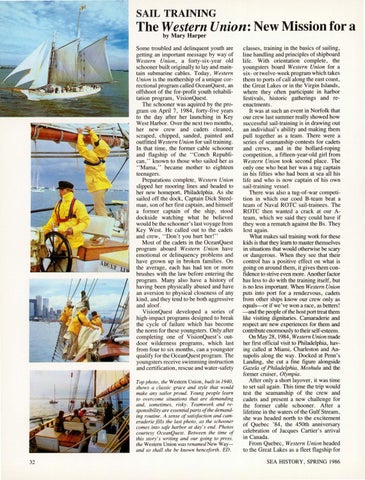 The Western Union: New Mission for a by Mary Harper

Some troubled and delinquent youth are getting an important message by way of Western Union , a forty-six-year old schooner built originally to lay and maintain submarine cables. Today , Western Union is the mothership of a unique correctional program called OceanQuest, an offshoot of the for-profit youth rehabilitation program , VisionQuest. The schooner was aquired by the program on April 7, 1984, forty-five years to the day after her launching in Key West Harbor. Over the next two months, her new crew and cadets cleaned, scraped , chipped , sanded , painted and outfitted Western Union for sail training . In that time , the former cable schooner and flagship of the &#39;&#39;Conch Republican,&quot; known to those who sailed her as &quot;Mama,&quot; became mother to eighteen teenagers. Preparations complete, Western Union slipped her mooring lines and headed to her new homeport, Philadelphia. As she sailed off the dock, Captain Dick Steedman , son of her fust captain , and himself a former captain of the ship , stood dockside watching what he believed would be the schooner&#39;s last voyage from Key West. He called out to the cadets and crew, &quot; Don &#39;t you hurt her!&quot; Most of the cadets in the OceanQuest program aboard Western Union have emotional or delinquency problems and have grown up in broken families. On the average, each has had ten or more brushes with the law before entering the program. Many also have a history of having been physically abused and have an aversion to physical closeness of any kind, and they tend to be both aggressive and aloof. VisionQuest developed a series of high-impact programs designed to break the cycle of failure which has become the norm for these youngsters. Only after completing one of VisionQuest&#39;s outdoor wilderness programs, which last from four to six months, can a youngster qualify for the OceanQuest program . The youngsters receive swimming instruction and certification , rescue and water-safety Top photo , the Western Union, built in 1940, shows a classic grace and style that would make any sailor proud. Young people learn to overcome situations that are demanding and, sometimes, risky. Teamwork and responsibility are essential parts of the demanding routine. A sense of satisfaction and cameraderie fills the last photo, as the schooner comes into safe harbor at day&#39;s end. Photos courtesy OceanQuest. Between the time of this story&#39;s writing and our going to press, the Western Union was renamed New Wayand so shall she be known henceforth . ED.

classes, training in the basics of sailing, line handling and principles of shipboard life. With orientation complete, the youngsters board Western Union for a six- or twelve-week program which takes them to ports of call along the east coast, the Great Lakes or in the Virgin Islands , where they often participate in harbor festivals, historic gatherings and reenactments. It was at such an event in Norfolk that our crew last summer really showed how successful sail-training is in drawing out an individual &#39;s ability and making them pull together as a team . There were a series of seamanship contests for cadets and crews, and in the bollard-roping competition, a fifteen-year-old girl from Western Union took second place. The only one who beat her was a tug captain in his fifties who had been at sea all his life and who is now captain of his own sail-training vessel. There was also a tug-of-war competition in which our coed B-team beat a team of Naval ROTC sail-trainees. The ROTC then wanted a crack at our Ateam , which we said they could have if they won a rematch against the Bs. They lost again . What makes sail training work for these kids is that they learn to master themselves in situations that would otherwise be scary or dangerous. When they see that their control has a positive effect on what is going on around them , it gives them confidence to strive even more. Another factor has less to do with the training itself, but is no less important. When Western Union puts into port for a rendezvous, cadets from other ships know our crew only as equals--or if we&#39;ve won a race, as betters! -and the people of the host port treat them like visiting dignitaries . Camaraderie and respect are new experiences for them and contribute enormously to their self-esteem. On May 28, 1984, Western Union made her first official visit to Philadelphia, having called at Miami , Charleston and Annapolis along the way . Docked at Penn&#39;s Landing , she cut a fine figure alongside Gazela of Philadelphia, Moshulu and the former cruiser, Olympia . After only a short layover, it was time to set sail again. This time the trip would test the seamanship of the crew and cadets and present a new challenge for the former cable schooner. After a lifetime in the waters of the Gulf Stream, she was headed north to the excitement of Quebec &#39;84, the 450th anniversary celebration of Jacques Cartier&#39;s arrival in Canada. From Quebec, Western Union headed to the Great Lakes as a fleet flagship for SEA HISTORY , SPRING 1986