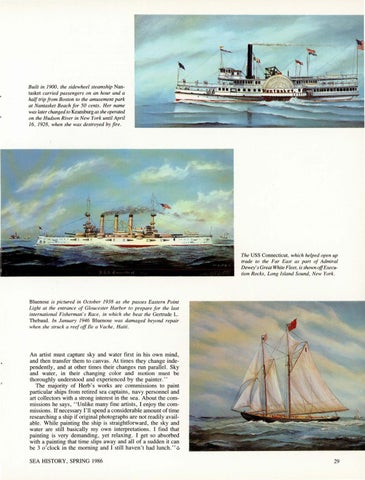 Built in 1900, the sidewheel steamship Nantasket carried passengers on an hour and a half trip from Boston to the amusement park at Nantasket Beach for 50 cents. Her name was later changed to Keansburg as she operated on the Hudson River in New York until April 16, 1928, when she was destroyed by fire.

Bluenose is pictured in October 1938 as she passes Eastern Point Light at the entrance of Gloucester Harbor to prepare for the last international Fisherman&#39;s Race, in which she beat the Gertrude L. Thebaud. Jn January 1946 Bluenose was damaged beyond repair when she struck a reef off Ile a Vache , Haiti .

An artist must capture sky and water first in his own mind, and then transfer them to canvas. At times they change independently, and at other times their changes run parallel. Sky and water, in their changing color and motion must be thoroughly understood and experienced by the painter.&quot; The majority of Herb&#39;s works are commissions to paint particular ships from retired sea captains, navy personnel and art collectors with a strong interest in the sea. About the commissions he says, &quot;Unlike many fine artists , I enjoy the commissions. If necessary I&#39; II spend a considerable amount of time researching a ship if original photographs are not readily available . While painting the ship is straightforward, the sky and water are still basically my own interpretations. I find that painting is very demanding , yet relaxing . I get so absorbed with a painting that time slips away and all of a sudden it can be 3 o&#39;clock in the morning and I still haven&#39;t had lunch.&quot; -t SEA HISTORY, SPRING 1986