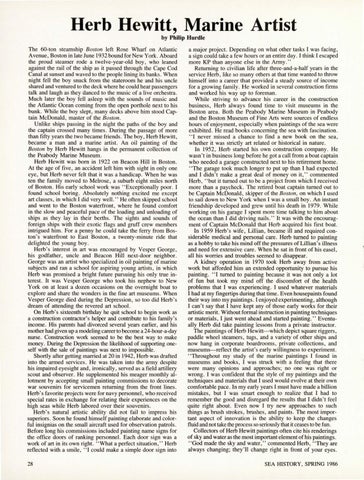 The 60-ton steamship Boston left Rose Wharf on Atlantic Avenue, Boston in late June 1932 bound for New York . Aboard the proud steamer rode a twelve-year-old boy, who leaned against the rail of the ship as it passed through the Cape Cod Canal at sunset and waved to the people lining its banks. When night fell the boy snuck from the stateroom he and his uncle shared and ventured to the deck where he could hear passengers talk and laugh as they danced to the music of a live orchestra. Much later the boy fell asleep with the sounds of music and the Atlantic Ocean coming from the open porthole next to his bunk. While the boy slept, many decks above him stood Captain McDonald, master of the Boston. Unlike ships passing in the night the paths of the boy and the captain crossed many times . During the passage of more than fifty years the two became friends. The boy , Herb Hewitt, became a man and a marine artist. An oil painting of the Boston by Herb Hewitt hangs in the permanent collection of the Peabody Marine Museum . Herb Hewitt was born in 1922 on Beacon Hill in Boston. At the age of five, an accident left him with sight in only one eye, but Herb never felt that it was a handicap . When he was ten the family moved to Melrose , a suburb eight miles north of Boston . His early school work was " Exceptionally poor. I found school boring . Absolutely nothing excited me except art classes, in which I did very well." He often skipped school and went to the Boston waterfront, where he found comfort in the slow and peaceful pace of the loading and unloading of ships as they lay in their berths. The sights and sounds of foreign ships with their exotic flags and gruff crew members intrigued him . For a penny he could take the ferry from Boston 's waterfront to East Boston , a twenty-minute ride that delighted the young boy. Herb 's interest in art was encouraged by Vesper George , his godfather, uncle and Beacon Hill next-door neighbor. George was an artist who specialized in oil painting of marine subjects and ran a school for aspiring young artists, in which Herb was promised a bright future pursuing his only true interest. It was Vesper George who took his nephew to New York on at least a dozen occasions on the overnight boat to explore and share the wonders in the fine art museums. When Vesper George died during the Depression, so too did Herb 's dream of attending the revered art school. On Herb's sixteenth birthday he quit school to begin work as a construction contractor's helper and contribute to his family's income. His parents had divorced several years earlier, and his mother had given up a modeling career to become a 24-hour-a-day nurse. Construction work seemed to be the best way to make money. During the Depression the likelihood of supporting oneself with the sale of paintings was next to impossible. Shortly after getting married at 20 in 1942, Herb was drafted into the armed services . He was taken into the army despite his impaired eyesight and, ironically, served as a field artillery scout and observer. He supplemented his meager monthly allotment by accepting small painting commissions to decorate war souvenirs for servicemen returning from the front lines. Herb 's favorite projects were for navy personnel , who received special rates in exchange for relating their experiences on the high seas while Herb labored over their souvenirs. Herb's natural artistic ability did not fail to impress his superiors. Soon he found himself painting elaborate and colorful insignias on the small aircraft used for observation patrols. Before long his commissions included painting name signs for the office doors of ranking personnel. Each door sign was a work of art in its own right. " What a perfect situation ," Herb reflected with a smile , " I could make a simple door sign into

a major project. Depending on what other tasks I was facing, a sign could take a few hours or an entire day. I think I escaped more KP than anyone else in the Army.'' Returning to civilian life after three-and-a-half years in the service Herb , like so many others at that time wanted to throw himself into a career that provided a steady source of income for a growing family. He worked in several construction firms and worked his way up to foreman. While striving to advance his career in the construction business , Herb always found time to visit museums in the Boston area. Both the Peabody Marine Museum in Peabody and the Boston Museum of Fine Arts were sources of endless hours of enjoyment, especially when paintings of the sea were exhibited. He read books concerning the sea with fascination. ''I never missed a chance to find a new book on the sea, whether it was strictly art related or historical in nature . In 1952, Herb started his own construction company. He wasn't in business long before he got a call from a boat captain who needed a garage constructed next to his retirement home . ''The garage took much longer to put up than I had expected and I didn ' t make a great deal of money on it," commented Herb , "but it turned out to be a project from which I received more than a paycheck. The retired boat captain turned out to be Captain McDonald , skipper of the Boston, on which I used to sail down to New York when I was a small boy. An instant friendship <level oped and grew until his death in 1979. While working on his garage I spent more time talking to him about the ocean than I did driving nails.'' It was with the encouragment of Captain McDonald that Herb acquired his first boat. In 1959 Herb's wife , Lillian , became ill and required considerable medical and personal care. Herb turned to painting as a hobby to take his mind off the pressures of Lillian 's illness and need for extensive care. When he sat in front of his easel, all his worries and troubles seemed to disappear. A kidney operation in 1970 took Herb away from active work but afforded him an extended opportunity to pursue his painting. "I turned to painting because it was not only a lot of fun but took my mind off the discomfort of the health problems that I was experiencing. I used whatever materials I had at my fingertips during that time . Even housepaints found their way into my paintings . I enjoyed experimenting , although I can't say that I have kept any of those early works for their artistic merit. Without formal instruction in painting techniques or materials , I just went ahead and started painting." Eventually Herb did take painting lessons from a private instructor. The paintings of Herb Hewitt-which depict square riggers, paddle wheel steamers, tugs , and a variety of other ships and now hang in corporate boardrooms, private collections, and museums-reflect the artist's early willingness to experiment. ''Throughout my study of the marine paintings I fo und in museums and books, I was struck with a feeling that there were many opinions and approaches; no one was right or wrong. I was confident that the style of my paintings and the techniques and materials that I used would evolve at their own comfortable pace . In my early years I must have made a billion mistakes , but I was smart enough to realize that I had to remember the good and disregard the results that I didn ' t feel quite right about. Even now I try new approaches to such things as brush strokes, brushes , and paints. The most important aspect of innovation is the ability to keep the changes fluid and not take the process so seriously that it ceases to be fun . Collectors of Herb Hewitt paintings often cite his renderings of sky and water as the most important element of his paintings. " God made the sky and water," commented Herb , "They are always changing; they' ll change right in front of your eyes. SEA HISTORY , SPRING 1986