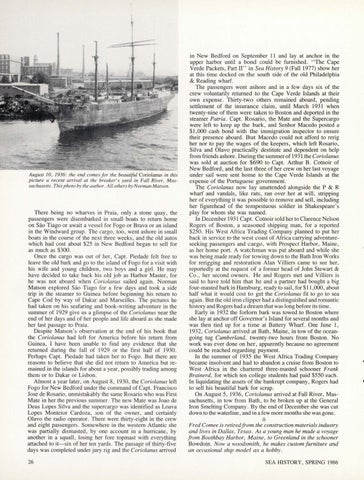 August JO, 1936: the end comes for the beautiful Coriolanus in thi; picture a recent arrival at the breaker&#39; s yard in Fall River, Massachusetts. This photo by the author. All others by Norman Matson .

There being no wharves in Praia, only a stone quay , the passengers were disembarked in small boats to return home on Sao Tiago or await a vessel for Fogo or Brava or an island in the Windward group . The cargo , too, went ashore in small boats in the course of the next three weeks, and the old autos which had cost about $25 in New Bedford began to sell for as much as $300. Once the cargo was out of her, Capt. Piedade felt free to leave the old bark and go to the island of Fogo for a visit with his wife and young children , two boys and a girl. He may have decided to take back his old job as Harbor Master, for he was not aboard when Coriolanus sailed again. Norman Matson explored Sao Tiago for a few days and took a side trip in the steamer to Guinea before beginning his return to Cape Cod by way of Dakar and Marseilles. The pictures he had taken on his seafaring and book-writing adventure in the summer of 1929 give us a glimpse of the Coriolanus near the end of her days and of her people and life aboard as she made her last passage to Praia. Despite Matson &#39; s observation at the end of his book that the Coriolanus had left for America before his return from Guinea, I have been unable to find any evidence that she returned during the fall of 1929 or the first half of 1930. Perhaps Capt. Piedade had taken her to Fogo. But there are reasons to believe that she did not return to America but remained in the islands for about a year, possibly trading among them or to Dakar or Lisbon. Almost a year later, on August 8, 1930, the Coriolanus left Fogo for New Bedford under the command of Capt. Francisco Jose de Rosario, unmistakably the same Rosario who was First Mate in her the previous summer. The new Mate was Joao de Deus Lopes Silva and the supercargo was identified as Loava Lopes Monteior Cardoza, son of the owner, and certainly Olavo the radio operator. There were thirty-eight in the crew and eight passengers. Somewhere in the western Atlantic she was partially dismasted, by one account in a hurricane, by another in a squall , losing her fore topmast with everything attached to it-six of her ten yards. The passage of thirty-five days was completed under jury rig and the Coriolanus arrived 26

in New Bedford on September 11 and lay at anchor in the upper harbor until a bond could be furnished . &quot;The Cape Verde Packets, Part II&quot; in Sea History 9 (Fall 1977) show her at this time docked on the south side of the old Philadelphia &amp; Reading wharf. The passengers went ashore and in a few days six of the crew voluntarily returned to the Cape Verde Islands at their own expense. Thirty-two others remained aboard, pending settlement of the insurance claim, until March 1931 when twenty-nine of them were taken to Boston and deported in the steamer Patria . Capt. Rosario, the Mate and the Supercargo were left to keep up the bark, and Senhor Macedo posted a $1,000 cash bond with the immigration inspector to ensure their presence aboard. But Macedo could not afford to rerig her nor to pay the wages of the keepers, which left Rosario, Silva and Olavo practically destitute and dependent on help from friends ashore. During the summer of 1931 the Coriolanus was sold at auction for $690 to Capt. Arthur B. Cotnoir of New Bedford, and the last three of her crew on her last voyage under sail were sent home to the Cape Verde Islands at the expense of the Portuguese government. The Coriolanus now lay unattended alongside the P &amp; R wharf and vandals, like rats, ran over her at will, stripping her of everything it was possible to remove and sell, including her figurehead of the tempestuous soldier in Shakespeare&#39;s play for whom she was named. In December 1931 Capt. Cotnoir sold her to Clarence Nelson Rogers of Boston, a seasoned shipping man, for a reported $250. His West Africa Trading Company planned to put her back in service to the west coast of Africa carrying adventureseeking passengers and cargo, with Prospect Harbor, Maine, as her home port. A watchman was put aboard and while she was being made ready for towing down to the Bath Iron Works for rerigging and restoration Alan Villiers came to see her, reportedly at the request of a former head of John Stewart &amp; Co. , her second owners . He and Rogers met and Villiers is said to have told him that he and a partner had bought a big four-masted bark in Hamburg, ready to sail, for $11,000, about half what it would cost to get the Coriolanus fit to go to sea again . But the old iron clipper had a distinguished and romantic history and Rogers had a dream that was long before its time. Early in 1932 the forlorn bark was towed to Boston where she lay at anchor off Governor&#39;s Island for several months and was then tied up for a time at Battery Wharf. One June 1, 1932, Coriolanus arrived at Bath, Maine, in tow of the oceangoing tug Cumberland, twenty-two hours from Boston. No work was ever done on her, apparently because no agreement could be reached regarding payment. In the summer of 1935 the West Africa Trading Company became insolvent and had to abandon a cruise from Boston to West Africa in the chartered three-masted schooner Frank Brainerd, for which ten college students had paid $550 each. In liquidating the assets of the bankrupt company, Rogers had to sell his beautiful bark for scrap. On August 5, 1936 , Coriolanus arrived at Fall River, Massachusetts, in tow from Bath, to be broken up at the General Iron Smelting Company . By the end of December she was cut down to the waterline, and in a few more months she was gone . &lt;!,.

Fred Comee is retired from the construction materials industry and lives in Dallas, Texas. As a young man he made a voyage from Boothbay Harbor, Maine, to Greenland in the schooner Bowdoin. Now a woodsmith, he makes custom furniture and an occasional ship mode l as a hobby. SEA HISTORY, SPRING 1986