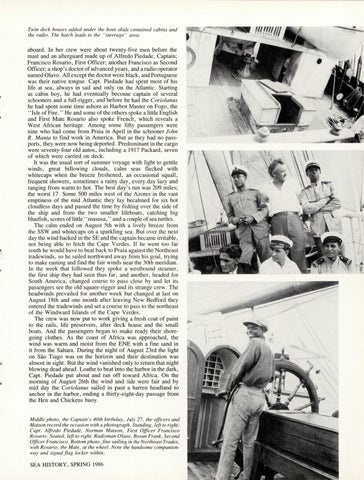 Twin deck houses added under the boat skids contained cabins and the radio. The hatch leads to the &quot;steerage&quot; area.

aboard. In her crew were about twenty-five men before the mast and an afterguard made up of Alfredo Piedade , Captain; Francisco Rosario, First Officer; another Francisco as Second Officer; a shop&#39;s doctor of advanced years, and a radio operator named Olavo. All except the doctor were black, and Portuguese was their native tongue. Capt. Piedade had spent most of his life at sea, always in sail and only on the Atlantic. Starting as cabin boy, he had eventually become captain of several schooners and a full-rigger , and before he had the Coriolanus he had spent some time ashore as Harbor Master on Fogo, the &#39;&#39; Isle of Fire.&#39;&#39; He and some of the others spoke a little English and First Mate Rosario also spoke French, which .reveals a West African heritage. Among some fifty passengers were nine who had come from Praia in April in the schooner John R . Manta to find work in America. But as they had no passports, they were now being deported . Predominant in the cargo were seventy-four old autos, including a 1917 Packard, seven of which were carried on deck. It was the usual sort of summer voyage with light to gentle winds, great billowing clouds, calm seas flecked with whitecaps when the breeze freshened, an occasional squall, frequent showers, sometimes a rainy day, every day lazy and ranging from warm to hot. The best day&#39;s run was 209 miles; the worst 17. Some 500 miles west of the Azores in the vast emptiness of the mid Atlantic they lay becalmed for six hot cloudless days and passed the time by fishing over the side of the ship and from the two smaller lifeboats , catching big bluefish, scores of little &#39;&#39;masusa,&#39;&#39; and a couple of sea turtles . The calm ended on August 5th with a lively breeze from the SSW and whitecaps on a sparkling sea. But over the next day the wind backed in the SE and the captain became irritable , not being able to fetch the Cape Verdes . If he went too far south he would have to beat back to Praia against the Northeast tradewinds, so he sailed northward away from his goal, trying to make easting and find the fair winds near the 30th meridian . In the week that followed they spoke a westbound steamer, the first ship they had seen thus far, and another, headed for South America, changed course to pass close by and let its passengers see the old square-rigger and its strange crew. The headwinds prevailed for another week but changed at last on August 18th and one month after leaving New Bedford they entered the tradewinds and set a course to pass to the northeast of the Windward Islands of the Cape Verdes. The crew was now put to work giving a fresh coat of paint to the rails, life preservers, after deck house and the small boats. And the passengers began to make ready their shoregoing clothes . As the coast of Africa was approached, the wind was warm and moist from the ENE with a fine sand in it from the Sahara. During the night of August 23rd the light on Sao Tiago was on the horizon and their destination was almost in sight. But the wind vanished only to return that night blowing dead ahead . Loathe to beat into the harbor in the dark, Capt. Piedade put about and ran off toward Africa. On the morning of August 26th the wind and tide were fair and by mid day the Coriolanus sailed in past a barren headland to anchor in the harbor, ending a thirty-eight-day passage from the Hen and Chickens buoy. Middle photo , the Captain&#39;s 40th birthday, July 27, the officers and Matson record the occasion with a photograph. Standing, left to right: Capt. Alfredo Piedade, Norman Matson, First Officer Francisco Rosario. Seated, left to right: Radioman Olave , Bosun Frank, Second Officer Francisco . Bottom photo, fine sailing in the Northeast Trades, with Rosario, the Mate, at the wheel. Note the handsome companionway and signal flag locker within.