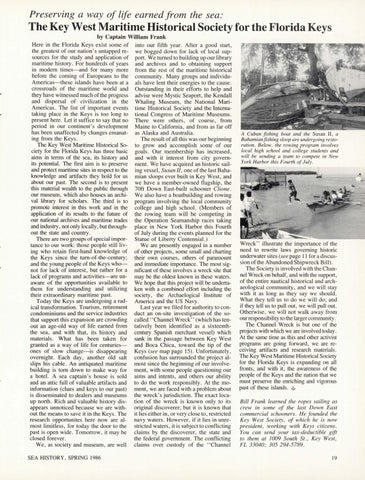 Preserving a way of life earned from the sea:

The Key West Maritime Historical Society for the Florida Keys by Captain William Frank Here in the Florida Keys exist some of into our fifth year. After a good start, the greatest of our nation &#39;s untapped re- we bogged down for lack of local supsources for the study and application of port. We turned to building up our library maritime history. For hundreds of years and archives and to obtaining support in modem times-and for many more from the rest of the maritime historical before the coming of Europeans to the community. Many groups and individuAmericas-these islands have been at a als have lent their energies to the cause. crossroads of the maritime world and Outstanding in their efforts to help and they have witnessed much of the progress advise were Mystic Seaport, the Kendall and dispersal of civilization in the Whaling Museum, the National MariAmericas. The list of important events time Historical Society and the Internataking place in the Keys is too long to tional Congress of Maritime Museums. present here. Let it suffice to say that no There were others, of course, from period in our continent&#39;s development Maine to California, and from as far off has been unaffected by changes emanat- as Alaska and Australia. ing from the Keys. The result of all this was our beginning The Key West Maritime Historical So- to grow and accomplish some of our ciety for the Florida Keys has three basic goals. Our membership has increased , aims in terms of the sea, its history and and with it interest from city governits potential. The first aim is to preserve ment. We have acquired an historic sailand protect maritime sites in respect to the ing vessel, Susan I/, one of the last Bahaknowledge and artifacts they hold for us mian sloops ever built in Key West , and about our past. The second is to present we have a member-owned flagship , the this material wealth to the public through 70ft Down East-built schooner Clione . our museum, which also houses an archi- We also have a boatbuilding and rowing val library for scholars. The third is to program involving the local community promote interest in this work and in the college and high school. (Members of application of its results to the future of the rowing team will be competing in our national archives and maritime trades the Operation Seamanship races taking and industry, not only locally , but through- place in New York Harbor this Fourth out the state and country . of July during the events planned for the There are two groups of special impor- Statue of Liberty Centennial.) tance to our work: those people still livWe are presently engaged in a number ing who retain first-hand knowledge of of other projects, some small and charting the Keys since the tum-of-the-century; their own courses, others of paramount and the young people of the Keys who-- and immediate importance. The most signot for lack of interest, but rather for a nificant of these involves a wreck site that lack of programs and activities-are un- may be the oldest known in these waters. aware of the opportunities available to We hope that this project will be undertathem for understanding and utilizing ken with a combined effort including the their extraordinary maritime past. society, the Archaelogical Institute of Today the Keys are undergoing a rad- America and the US Navy. ical transformation. Tourism, retirement Last year we filed for authority to concondominiums and the service industries duct an on-site investigation of the sothat support this expansion are crowding called &quot;Channel Wreck&quot; (which has tenout an age-old way of life earned from tatively been identified as a sixteenththe sea, and with that , its history and century Spanish merchant vessel) which materials. What has been taken for sank in the passage between Key West granted as a way of life for centuries- and Boca Chica, toward the tip of the ones of slow change-is disappearing Keys (see map page 15). Unfortunately , overnight. Each day, another old salt confusion has surrounded the project alslips his cable. An antiquated maritime most since the beginning of our involvebuilding is Âˇ tom down to make way for ment , with some people questioning our a hotel. A sea captain&#39;s house is sold aims and intents , and others our ability and an attic full of valuable artifacts and to do the work responsibly . At the moinformation (clues and keys to our past) ment, we are faced with a problem about is disseminated to dealers and museums the wreck &#39;s jurisdiction. The exact locaup north. Rich and valuable history dis- tion of the wreck is known only to its appears unnoticed because we are with- original discoverer; but it is known that out the means to save it in the Keys . The it lies either in , or very close to, restricted research opportunites here now are al- navy waters. However, if it lies in unremost limitless , for today the door to the stricted waters, it is subject to conflicting past is open wide. Tomorrow, it may be claims by the discoverer, the state and closed forever. the federal government. The conflicting We, as society and museum , are well claims over custody of the &#39;&#39;Channel SEA HISTORY , SPRING 1986

A Cuban fishing boat and the Susan II, a Bahamian.fishing sloop are undergoing restoration. Below, the rowing program involves local high school and college students and will be sending a team to compete in New York Harbor this Fourth of July.

Wreck&quot; illustrate the importance of the need to rewrite Jaws governing historic underwater sites (see page 11 for a discussion of the Abandoned Shipwreck Bill). The Society is involved with the Channel Wreck on behalf, and with the support, of the entire nautical historical and archaeological community, and we will stay with it as long as they say we should. What they tell us to do we will do; and if they tell us to pull out, we will pull out. Otherwise, we will not walk away from our responsibility to the larger community. The Channel Wreck is but one of the projects with which we are involved today . At the same time as this and other activist programs are going forward, we are receiving artifacts and research materials . The Key West Maritime Historical Society for the Florida Keys is expanding on all fronts , and with it, the awareness of the people of the Keys and the nation that we must preserve the enriching and vigorous past of these islands . .i.

Bill Frank learned the ropes sailing as crew in some of the last Down East commercial schooners. He founded the Key West Society, of which he is now president, working with Keys citizens. You can send your tax-deductible gift to them at 1009 South St., Key West, FL 33040; 305 294-5789. 19