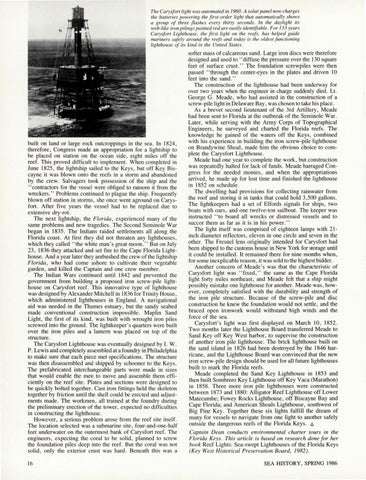 The Carysfort light was automated in 1960. A solar panel now charges the batteries powering the first-order light that automatically shows a group of three flashes every thirty seconds. In the daylight its web-like iron pilings painted red are easily identifiable. For 133 years Carysfort Lighthouse, the first light on the reefs, has helped guide mariners safely around the reefs and today is the oldest functioning lighthouse of its kind in the United States.

built on land or large rock outcroppings in the sea . In 1824, therefore, Congre~s made an appropriation for a lightship to be placed on station on the ocean side , eight miles off the reef. This proved difficult to implement. When completed in June 1~25 , the lightship sailed to the Keys, but off Key Biscayne 1t was blown onto the reefs in a storm and abandoned by the crew . Salvagers took possession of the ship and the &quot;contractors for the vessel were obliged to ransom it from the wreckers .&quot; Problems continued to plague the ship. Frequently blown off station in storms, she once went aground on Carysfort. After five years the vessel had to be replaced due to extensive dry-rot. The next lightship , the Florida , experienced many of the same problems and new tragedies . The Second Seminole War beg~n in 1835. The Indians raided settlements all along the Flo.nda coast. At first they did not threaten any lighthouses , which they called &quot; the white man &#39; s great moon .&quot; But on July 23, 1836 they attacked and set fire to the Cape Florida Lighthous~ . And a year later they ambushed the crew of the lightship Florida, who had come ashore to cultivate their vegetable garden, and killed the Captain and one crew member. The Indian Wars continued until 1842 and prevented the government from building a proposed iron screw-pile lighthouse on Carysfort reef. This innovative type of lighthouse was designed by Alexander Mitchell in 1836 for Trinity House , which administered lighthouses in England . A navigational aid was needed in the Thames estuary, but the sandy seabed ~ade conventional construction impossible . Maplin Sand Light, the first of its kind , was built with wrought iron piles screwed into the ground . The lightkeeper&#39; s quarters were built over the iron piles and a lantern was placed on top of the structure. The ~arysfort Lighthouse was eventually designed by I. W. P. Lewis and completely assembled at a foundry in Philadelphia to make sure that each piece met specifications . The structure was then di~assem~led and shipped by schooner to the Keys. The prefabncated mterchangeable parts were made in sizes that would enable the men to move and assemble them efficiently on the reef site. Plates and sections were designed to be quickly bolted together. Cast iron fittings held the skeleton together by friction until the shell could be erected and adjustments made. The workmen, all trained at the foundry during the preliminary erection of the tower, expected no difficulties in constructing the lighthouse. However, a serious problem arose from the reef site itself. The location selected was a submarine site, four-and-one-half feet underwater on the outermost bank of Carysfort reef. The engineers, expecting the coral to be solid, planned to screw the foundation piles deep into the reef. But the coral was not solid, only the exterior crust was hard . Beneath this was a 16

softer mass of calcareous sand. Large iron discs were therefore designed and used to &quot;diffuse the pressure over the 130 square feet of surface crust.&#39;&#39; The foundation screwpiles were then passed &quot;through the center-eyes in the plates and driven 10 feet into the sand . &quot; The construction of the lighthouse had been underway for over two years when the engineer in charge suddenly died. Lt. George G. Meade, who had assisted in the construction of a screw-pile light in Delaware Bay, was chosen to take his place. As a brevet second lieutenant of the 3rd Artillery, Meade had been sent to Florida at the outbreak of the Seminole War. Later, while serving with the Army Corps of Topographical Engineers, he surveyed and charted the Florida reefs. The knowledge he gained of the waters off the Keys , combined with his experience in building the iron screw-pile lighthouse on Brandywine Shoal, made him the obvious choice to complete the Carysfort Lighthouse. Meade had one year to complete the work, but construction was repeatedly halted for lack of funds . Meade barraged Congress for the needed monies, and when the appropriations arrived, he made up for lost time and finished the lighthouse in 1852 on schedule . The dwelling had provisions for collecting rainwater from the roof and storing it in tanks that could hold 3,500 gallons. The lightkeepers had a set of Elfords signals for ships, two boats with oars , and one twelve-ton sailboat. The keeper was instructed &#39;&#39; to board all wrecks or distressed vessels and to succor them as far as it is in his power. &quot; The light itself was comprised of eighteen lamps with 21inch diameter reflectors , eleven in one circle and seven in the other. The Fresnel lens originally intended for Carysfort had been shipped to the customs house in New York for storage until it could be installed . It remained there for nine months when for some inexplicable reason, it was sold to the highest bidder. &#39; Another concern of Meade&#39;s was that the characteristic of Carysfort light was &quot; fixed , &quot; the same as the Cape Florida light forty miles northeast, and Meade felt that a ship might possibly mistake one lighthouse for another. Meade was, however , completely satisfied with the durability and strength of the iron pile structure. Because of the screw-pile and disc construction he knew the foundation would not settle, and the braced open ironwork would withstand high winds and the force of the sea . Carysfort&#39; s light was first displayed on March I 0 , 1852 . Two months later the Lighthouse Board transferred Meade to Sand Key off Key West harbor, to supervise the construction of another iron pile lighthouse . The brick lighthouse built on the sand island in 1826 had been destroyed by the 1846 hurricane, and the Lighthouse Board was convinced that the new iron screw-pile design should be used for all future lighthouses built to mark the Florida reefs. Meade completed the Sand Key Lighthouse in 1853 and then built Sombrero Key Lighthouse off Key Vaca (Marathon) in 1858. Three more iron pile lighthouses were constructed between 1873 and 1880: Alligator Reef Lighthouse off Lower Matecumbe; Fowey Rocks Lighthouse, off Biscayne Bay and Cape Florida; and American Shoals Lighthouse , southwest of Big Pine Key. Together these six lights fulfill the dream of many for vessels to navigate from one light to another safely outside the dangerous reefs of the Florida Keys . .i,

Captain Dean conducts environmental charter tours in the Florida Keys . This article is based on research done for her book Reef Lights: Sea-swept Lighthouses of the Florida Keys (Key West Historical Preservation Board, 1982). SEA HISTORY , SPRING 1986