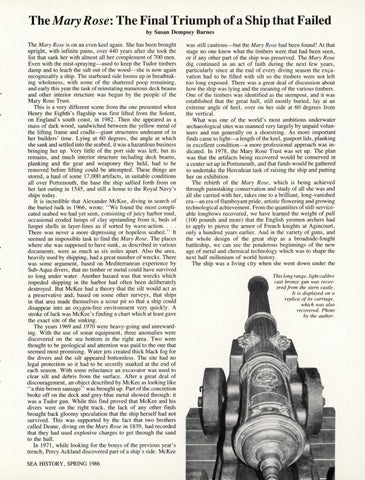 The Mary Rose: The Final Triumph of a Ship that Failed by Susan Dempsey Barnes The Mary Rose is on an even keel again. She has been brought upright, with infinite pains, over 440 years after she took the list that sank her with almost all her complement of 700 men. Even with the mist-spraying-used to keep the Tudor timbers damp and to leach the salt out of the wood-she is now again recognizably a ship. The starboard side looms up in breathtaking wholeness , with some of the shattered poop remaining, and early this year the task of reinstating numerous deck beams and other interior structure was begun by the people of the Mary Rose Trust. This is a very different scene from the one presented when Henry the Eighth&#39;s flagship was first lifted from the Solent, on England&#39;s south coast, in 1982. Then she appeared as a mass of dark wood , sandwiched between the yellow metal of the lifting frame and cradle-giant structures undreamt of in her builders &#39; time. Lying at 60 degrees , the angle at which she sank and settled into the seabed, it was a hazardous business bringing her up. Very little of the port side was left, but its remains, and much interior structure including deck beams , planking and the gear and weaponry they held , had to be removed before lifting could be attempted. These things are stored, a haul of some 17 ,000 artifacts , in suitable conditions all over Portsmouth, the base the ship sallied forth from on her last outing in 1545 , and still a home to the Royal Navy &#39;s ships today . It is incredible that Alexander McKee , diving in search of the buried hulk in 1966, wrote: &quot;We found the most complicated seabed we had yet seen, consisting of juicy harbor mud, occasional eroded lumps of clay upstanding from it, beds of limpet shells in layer-lines as if sorted by wave-action . . . . There was never a more depressing or hopeless seabed.&quot; It seemed an impossible task to find the Mary Rose . The places where she was supposed to have sunk, as described in various documents , were as much as six miles apart. Also the area, heavily used by shipping, had a great number of wrecks. There was some argument, based on Mediterranean experience by Sub-Aqua divers, that no timber or metal could have survived so long under water. Another hazard was that wrecks which impeded shipping in the harbor had often been deliberately destroyed . But McKee had a theory that the silt would act as a preservative and , based on some other surveys , that ships in that area made themselves a scour pit so that a ship could disappear into an oxygen-free environment very quickly. A stroke of luck was McKee &#39;s finding a chart which at least gave the exact site of the sinking. The years 1969 and 1970 were heavy-going and unrewarding. With the use of sonar equipment, three anomalies were discovered on the sea bottom in the right area . Two were thought to be geological and attention was paid to the one that seemed most promising. Water jets created thick black fog for the divers and the silt appeared bottomless. The site had no legal protection so it had to be secretly marked at the end of each season. With some reluctance an excavator was used to clear silt and debris from the surface. After a great deal of discouragement, an object described by McKee as looking like &quot;a thin brown sausage&quot; was brought up. Part of the concretion broke off on the deck and grey-blue metal showed through: it was a Tudor gun . While this find proved that McKee and his divers were on the right track , the lack of any other finds brought back gloomy speculation that the ship herself had not survived. This was supported by the fact that two brothers called Deane, diving on the Mary Rose in 1839 , had recorded that they had used explosive charges to get through the sand to the hull. In 1971, while looking for the bouys of the previous year&#39;s trench, Percy Ackland discovered part of a ship&#39;s side . McKee SEA HISTORY, SPRING 1986

was still cautious-but the Mary Rose had been found! At that stage no one knew what the timbers were that had been seen, or if any other part of the ship was preserved. The Mary Rose dig continued as an act of faith during the next few years, particularly si nce at the end of every diving season the exc;:avation had to be filled with silt so the timbers were not left too long exposed. There was a great deal of discussion about how the ship was lying and the meaning of the various timbers. One of the timbers was identified as the stempost, and it was established that the great hull , still mostly buried , lay at an extreme angle of heel, over on her side at 60 degrees from the vertical. What was one of the world&#39;s most ambitious underwater archaeological sites was manned very largely by unpaid volunteers and run generally on a shoestring. As more important finds came to light-a length of the keel , gunport lids , planking in excellent condition-a more professional approach was indicated. In 1978 , the Mary Rose Trust was set up. The plan was that the artifacts being recovered would be conserved in a center set up in Portsmouth , and that funds would be gathered to undertake the Herculean task of raising the ship and putting her on exhibition. The rebirth of the Mary Rose, which is being achieved through painstaking conservation and study of all she was and all she carried with her, takes one to a brilliant, long-vanished era-an era of flamboyant pride , artistic flowering and growing technological achievement. From the quantities of still-serviceable longbows recovered , we have learned the weight of pull (100 pounds and more) that the English yeomen archers had to apply to pierce the armor of French knights at Agincourt , only a hundred years earlier. And in the variety of guns, and the whole design of the great ship as a broadside-fought battleship , we can see the ponderous beginnings of the new age of metal and chemical technology which was to shape the next half millenium of world history . The ship was a living city when she went down under the This long range, light calibre cast bronze gun was recovered from the stern castle. It is displayed on a replica of its carriage, which was also recovered. Photo by the author.