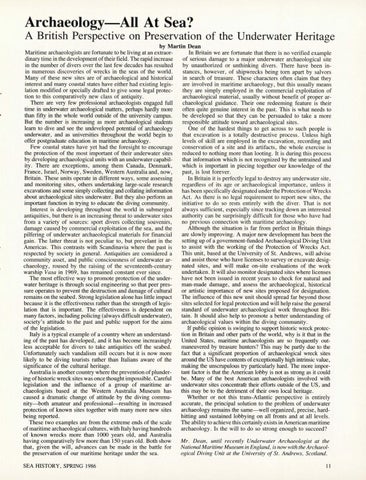 Archaeology-All At Sea? A British Perspective on Preservation of the Underwater Heritage by Martin Dean Maritime archaeologists are fortunate to be living at an extraordinary time in the development of their field. The rapid increase in the number of divers over the last few decades has resulted in numerous discoveries of wrecks in the seas of the world. Many of these new sites are of archaeological and historical interest and many coastal states have either had existing legislation modified or specially drafted to give some legal protection to this comparatively new class of antiquity . There are very few professional archaeologists engaged full time in underwater archaeological matters , perhaps hardly more than fifty in the whole world outside of the university campus . But the number is increasing as more archaeological students learn to dive and see the undeveloped potential of archaeology underwater, and as universities throughout the world begin to offer postgraduate education in maritime archaeology . Few coastal states have yet had the foresight to encourage the protection of the most important of their underwater sites by developing archaeological units with an underwater capability . There are exceptions , among them Canada, Denmark, France, Israel, Norway , Sweden, Western Australia and, now , Britain . These units operate in different ways, some assessing and monitoring sites, others undertaking large-scale research excavations and some simply collecting and collating information about archaeological sites underwater. But they also perform an important function in trying to educate the diving community. Interest is developing throughout the world in submerged antiquities , but there is an increasing threat to underwater sites from a variety of sources: sport divers collecting souvenirs, damage caused by commercial exploitation of the sea, and the pilfering of underwater archaeological materials for financial gain . The latter threat is not peculiar to, but prevelant in the Americas . This contrasts with Scandinavia where the past is respected by society in general. Antiquities are considered a community asset, and public consciousness of underwater archaeology , roused by the raising of the seventeenth-century warship Vasa in 1969 , has remained constant ever since . The most effective way to promote protection of the underwater heritage is through social engineering so that peer pressure operates to prevent the destruction and damage of cultural remains on the seabed . Strong legislation alone has little impact because it is the effectiveness rather than the strength of legislation that is important. The effectiveness is dependent on many factors , including policing (always difficult underwater) , society&#39;s attitude to the past and public support for the aims of the legislation . Italy is a typical example of a country where an understanding of the past has developed , and it has become increasingly less acceptable for divers to take antiquities off the seabed . Unfortunately such vandalism still occurs but it is now more likely to be diving tourists rather than Italians aware of the significance of the cultural heritage . Australia is another country where the prevention of plundering of historic wreck sites was once thought impossible. Careful legislation and the influence of a group of maritime archaeologists based at the Western Australia Museum has caused a dramatic change of attitude by the diving community-both amateur and professional-resulting in increased protection of known sites together with many more new sites being reported. These two examples are from the extreme ends of the scale of maritime archaeological cultures, with Italy having hundreds of known wrecks more than 1000 years old, and Australia having comparatively few more than 150 years old. Both show that, given the will , advances can be made in the battle for the preservation of our maritime heritage under the sea. SEA HISTORY , SPRING 1986

In Britain we are fortunate that there is no verified example of serious damage to a major underwater archaeological site by unauthorized or unthinking divers . There have been instances , however, of shipwrecks being tom apart by salvors in search of treasure. These characters often claim that they are involved in maritime archaeology , but this usually means they are simply employed in the commercial exploitation of archaeological material, usually without benefit of proper archaeological guidance. Their one redeeming feature is their often quite genuine interest in the past. This is what needs to be developed so that they can be persuaded to take a more responsible attitude toward archaeological sites . One of the hardest things to get across to such people is that excavation is a totally destructive process . Unless high levels of skill are employed in the excavation, recording and conservation of a site and its artifacts, the whole exercise is reduced to nothing more than looting . It is during this process that information which is not recognized by the untrained and which is important in piecing together our knowledge of the past, is lost forever. In Britain it is perfectly legal to destroy any underwater site , regardless of its age or archaeological importance , unless it has been specifically designated under the Protection of Wrecks Act. As there is no legal requirement to report new sites, the initiative to do so rests entirely with the diver. That is not always sufficient , especially since tracking down an interested authority can be surprisingly difficult for those who have had no previous connection with maritime archaeology . Although the situation is far from perfect in Britain things are slowly improving . A major new development has been the setting up of a government-funded Archaeological Diving Unit to assist with the working of the Protection of Wrecks Act. This unit, based at the University of St. Andrews, will advise and assist those who have licenses to survey or excavate designated sites, and will make on-site evaluations of the work undertaken . It will also monitor designated sites where licenses have not been issued in recent years to check for natural and man-made damage, and assess the archaeological, historical or artistic importance of new sites proposed for designation . The influence of this new unit should spread far beyond those sites selected for legal protection and will help raise the general standard of underwater archaeological work throughout Britain. It should also help to promote a better understanding of archaeological values within the diving community. If public opinion is swinging to support historic wreck protection in Britain and other parts of the world, why is it that in the United States, maritime archaeologists are so frequently outmaneuvered by treasure hunters? This may be partly due to the fact that a significant proportion of archaeological wreck sites around the US have contents of exceptionally high intrinsic value, making the unscrupulous try particularly hard. The more important factor is that the American lobby is not as strong as it could be. Many of the best American archaeologists involved with underwater sites concentrafe their efforts outside of the US, and this may be to the detriment of their own local heritage. Whether or not this trans-Atlantic perspective is entirely accurate, the principal solution to the problem of underwater archaeology remains the same-well organized , precise , hardhitting and sustained lobbying on all fronts and at all levels. The ability to achieve this certainly exists in American maritime archaeology . Is the will to do so strong enough to succeed?

Mr. Dean, until recently Underwater Archaeologist at the National Maritime Museum in England, is now with the Archaeological Diving Unit at the University of St. Andrews, Scotland. 11