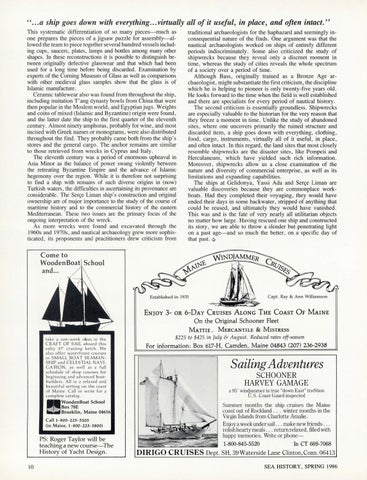 &quot; ... a ship goes down with everything ... virtually all of it useful, in place, and often intact.&quot; This systematic differentiation of so many pieces-much as one prepares the pieces of a jigsaw puzzle for assembly-allowed the team to piece together several hundred vessels including cups, saucers , plates, lamps and bottles among many other shapes. In these reconstructions it is possible to distinguish between originally defective glasswear and that which had been used for a long time before being discarded. Examination by experts of the Coming Museum of Glass as well as comparisons with other medieval glass samples show that the glass is of Islamic manufacture. Ceramic tablewear also was found from throughout the ship , including imitation T&#39; ang dynasty bowls from China that were then popular in the Moslem world, and Egyptian jugs. Weights and coins of mixed (Islamic and Byzantine) origin were found, and the latter date the ship to the first quarter of the eleventh century . Almost ninety amphoras , probably for wine , and most incised with Greek names or monograms , were also distributed throughout the find . They probably came both from the ship &#39;s stores and the general cargo. The anchor remains are similar to those retrieved from wrecks in Cyprus and Italy . The eleventh century was a period of enormous upheaval in Asia Minor as the balance of power swung violently between the retreating Byzantine Empire and the advance of Islamic hegemony over the region . While it is therefore not surprising to find a ship with remains of such diverse origins in (now) Turkish waters, the difficulties in ascertaining its provenance are considerable. The Sen;:e Liman ship&#39;s construction and original ownership are of major importance to the study of the course of maritime history and to the commercial history of the eastern Mediterranean. These two issues are the primary focus of the ongoing interpretation of the wreck. As more wrecks were found and excavated through the 1960s and 1970s, and nautical archaeology grew more sophisticated, its proponents and practitioners drew criticism from

traditional archaeologists for the haphazard and seemingly inconsequential nature of the finds. One argument was that the nautical archaeologists worked on ships of entirely different periods indiscriminately. Some also criticized the study of shipwrecks because they reveal onl y a discreet moment in time , whereas the study of cities reveals the whole spectrum of a society over a period of time. Although Bass, originally trained as a Bronze Age archaeologist, might substantiate the first criticism, the discipline which he is helping to pioneer is only twenty-five years old. He looks forward to the time when the field is well established and there are specialists for every period of nautical history. The second criticism is essentially groundless. Shipwrecks are especially valuable to the historian for the very reason that they freeze a moment in time. Unlike the study of abandoned sites , where one uncovers primarily the ruined structure and discarded item, a ship goes down with everything , clothing, food, cargo, instruments, virtually all of it useful , in place, and often intact. In this regard, the land sites that most closely resemble shipwrecks are the disaster sites, like Pompeii and Herculaneum, which have yielded such rich information. Moreover, shipwrecks allow us a close examination of the nature and diversity of commercial enterprise, as well as its limitations and expanding capabilities. The ships at Gelidonya, Yassi Ada and Sen;:e Liman are valuable discoveries because they are commonplace workboats. Had they completed their voyaging, they would have ended their days in some backwater, stripped of anything that could be reused, and ultimately they would have vanished . This was and is the fate of very nearly all utilitarian objects no matter how large . Having rescued one ship and constructed its story, we are able to throw a slender but penetrating light on a past age-and so much the better, on a specific day of that past. w

OR 6-DA y CRUISES ALONG THE COAST