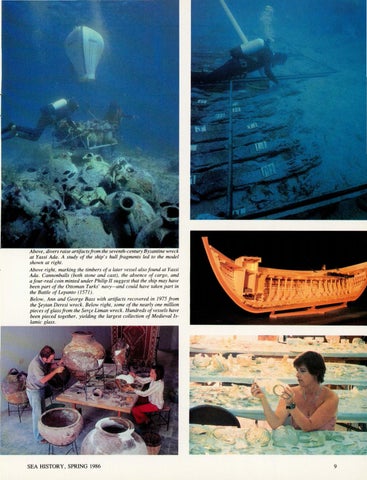 Above, divers raise artifacts from the seventh-century Byzantine wreck at Yassi Ada. A study of the ship's hull fragments led to the model shown at right. Above right, marking the timbers of a later vessel also found at Yassi Ada. Cannonballs (both stone and cast), the absence of cargo, and a four-real coin minted under Philip II suggest that the ship may have been part of the Ottoman Turks' navy-and could have taken part in the Battle of Lepanto (15 71). Below, Ann and George Bass with artifacts recovered in 1975 from the ยงeytan Deresi wreck. Below right, some of the nearly one million pieces of glass from the Ser~e Liman wreck. Hundreds of vessels have been pieced together, yielding the largest collection of Medieval Islamic glass.