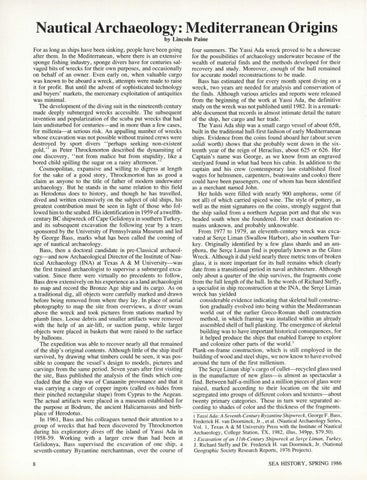 For as long as ships have been sinking , people have been going after them. In the Mediterranean, where there is an extensive sponge fishing industry, sponge divers have for centuries salvaged bits of wrecks for their own purposes, and occasionally on behalf of an owner. Even early on, when valuable cargo was known to be aboard a wreck, attempts were made to raise it for profit. But until the advent of sophisticated technology and buyers&#39; markets, the mercenary exploitation of antiquities was minimal. The development of the diving suit in the nineteenth century made deeply submerged wrecks accessible . The subsequent invention and popularization of the scuba put wrecks that had lain undisturbed for centuries-and in more than a few cases, for millenia-at serious risk . An appalling number of wrecks whose excavation was not possible without trained crews were destroyed by sport divers &quot;perhaps seeking non-existent gold,&quot; as Peter Throckmorton described the dynamiting of one discovery, &quot;not from malice but from stupidity , like a bored child spilling the sugar on a rainy afternoon.&quot; Cosmopolitan, expansive and willing to digress at length for the sake of a good story, Throckmorton has as good a claim as anyone to the title of father of modem underwater archaeology. But he stands in the same relation to this field as Herodotus does to history, and though he has travelled , dived and written extensively on the subject of old ships , his greatest contribution must be seen in light of those who followed him to the seabed. His identification in 1959 of a twelfthcentury BC shipwreck off Cape Gelidonya in southern Turkey, and its subsequent excavation the following year by a team sponsored by the University of Pennsylvania Museum and led by George Bass, marks what has been called the coming of age of nautical archaeology . Bass, then a doctoral candidate in pre-Classical archaeology-and now Archaeological Director of the Institute of Nautical Archaeology (INA) at Texas A &amp; M University-was the first trained archaeologist to supervise a submerged excavation. Since there were virtually no precedents to follow , Bass drew extensively on his experience as a land archaeologist to map and record the Bronze Age ship and its cargo. As on a traditional dig, all objects were carefully marked and drawn before being removed from where they lay . In place of aerial photography to map the site from overviews, a diver swam above the wreck and took pictures from stations marked by plumb lines . Loose debris and smaller artifacts were removed with the help of an air-lift, or suction pump, while larger objects were placed in baskets that were raised to the surface by balloons. The expedition was able to recover nearly all that remained of the ship&#39;s original contents . Although little of the ship itself survived, by drawing what timbers could be seen, it was possible to compare the vessel&#39;s design to models , pictures and carvings from the same period. Seven years after first visiting the site, Bass published the analysis of the finds which concluded that the ship was of Canaanite provenance and that it was carrying a cargo of copper ingots (called ox-hides from their pinched rectangular shape) from Cyprus to the Aegean. The actual artifacts were placed in a museum established for the purpose at Bodrum, the ancient Halicamassus and birthplace of Herodotus . In 1961 , Bass and his colleagues turned their attention to a group of wrecks that had been discovered by Throckmorton during his exploratory dives off the island of Yassi Ada in 1958-59. Working with a larger crew than had been at Gelidonya, Bass supervised the excavation of one ship , a seventh-century Byzantine merchantman, over the course of 8

four summers . The Yassi Ada wreck proved to be a showcase for the possibilities of archaeology underwater because of the wealth of material finds and the methods developed for their recovery and study. Moreover , enough of the hull remained for accurate model reconstructions to be made . Bass has estimated that for every month spent diving on a wreck, two years are needed for analysis and conservation of the finds. Although various articles and reports were released from the beginning of the work at Yassi Ada, the definitive study on the wreck was not published until 1982. It is a remarkable document that records in almost intimate detail the nature of the ship, her cargo and her trade.&#39; The Yassi Ada ship was a small cargo vessel of about 65ft, built in the traditional hull-first fashion of early Mediterranean ships. Evidence from the coins found aboard her (about seven solidi worth) shows that she probably went down in the sixteenth year of the reign of Heraclius, about 625 or 626. Her Captain&#39;s name was George, as we know from an engraved Âˇsteelyard found in what had been his cabin. In addition to the captain and his crew (contemporary law established fixed wages for helmsmen, carpenters, boatswains and cooks) there could have been passengers , one of whom has been identified as a merchant named John . Her holds were filled with nearly 900 amphoras , some (if not all) of which carried spiced wine. The style of pottery, as well as the mint signatures on the coins , strongly suggest that the ship sailed from a northern Aegean port and that she was headed south when she foundered. Her exact destination remains unknown, and probably unknowable. From 1977 to 1979, an eleventh-century wreck was excavated at Sen;e Liman (Swallow Harbor) , also in southern Turkey . Originally identified by a few glass shards and an amphora, the Ser~e Liman find is popularly known as the Glass Wreck. Although it did yield nearly three metric tons of broken glass , it is more important for its hull remains which clearly date from a transitional period in naval architecture. Although only about a quarter of the ship survives, the fragments come from the full length of the hull. In the words of Richard Steffy , a specialist in ship reconstruction at the INA , the Ser~e Liman wreck has yielded considerable evidence indicating that skeletal hull construction gradually evolved into being within the Mediterranean world out of the earlier Greco-Roman shell construction method, in which framing was installed within an already assembled shell of hull planking. The emergence of skeletal building was to have important historical consequences , for it helped produce the ships that enabled Europe to explore and colonize other parts of the world. 2 Plank-on-frame construction , which is still employed in the building of wood and steel ships , we now know to have evolved around the tum of the first millenium. The Ser~e Liman ship&#39; s cargo of cullet-recycled glass used in the manufacture of new glass-is almost as spectacular a find . Between half-a-million and a million pieces of glass were raised , marked according to their location on the site and segregated into groups of different colors and textures-about twenty primary categories . These in tum were separated according to shades of color and the thickness of the fragments. 1 Yassi Ada: A Seventh-Century Byzantine Shipwreck, George F. Bass, Frederick H. van Doominck , Jr., et al. (Nautical Archaeology Series, Vol. I, Texas A &amp; M University Press with the Institute of Nautical Archaeology , College Station , TX , 1982, illus , 349pp, $79 .50). 2 Excavation of an 11th-Century Shipwreck at Ser~e Liman, Turkey, J. Richard Steffy and Dr. Frederick H. van Doominck, Jr. (National Geographic Society Research Reports , 1976 Projects).