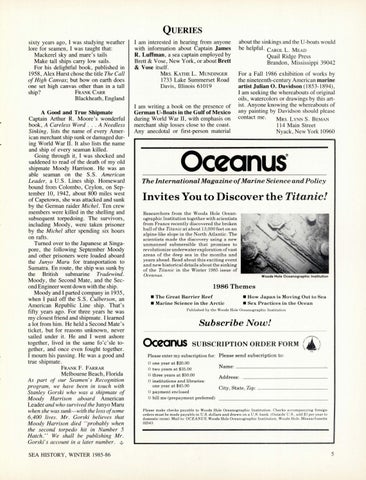 QUERIES sixty years ago, I was studying weather lore for seamen , I was taught that: Mackerel sky and mare&#39;s tails Make tall ships carry low sails. For his delightful book, published in 1958 , Alex Hurst chose the title The Call of High Canvas ; but how on earth does one set high canvas other than in a tall ship? FRANK CARR Blackheath, England A Good and True Shipmate Captain Arthur R . Moore&#39; s wonderful book, A Careless Word ... A Needless Sinking, lists the name of every American merchant ship sunk or damaged during World War II . It also lists the name and ship of every seaman killed . Going through it, I was shocked and saddened to read of the death of my old shipmate Moody Harrison . He was an able seaman on the S.S. American Leader, a U.S. Lines ship . Homeward bound from Colombo, Ceylon , on September IO , 1942, about 800 miles west of Capetown, she was attacked and sunk by the German raider Michel. Ten crew members were killed in the shelling and subsequent torpedoing . The survivors, including Moody , were taken prisoner by the Michel after spending six hours on rafts. Turned over to the Japanese at Singapore , the following September Moody and other prisoners were loaded aboard the Junyo Maru for transportation to Sumatra. En route , the ship was sunk by the British submarine Tradewind. Moody , the Second Mate , and the Second Engineer went down with the ship. Moody and I parted company in 1935 , when I paid off the S.S . Culberson, an American Republic Line ship . That&#39; s fifty years ago. For three years he was my closest friend and shipmate . I learned a lot from him . He held a Second Mate&#39;s ticket, but for reasons unknown , never sailed under it. He and I went ashore together, lived in the same fo&#39;c&#39;s le together, and once even fought together. I mourn his passing. He was a good and true shipmate. FRANK F. FARRAR Melbourne Beach, Florida As part of our Seamen&#39; s Recognition program, we have been in touch with Stanley Gorski who was a shipmate of Moody Harrison aboard American Leader and who survived the Junyo Maru when she was sunk-with the loss of some 6,400 lives. Mr. Gorski believes that Moody Harrison died &quot; probably when the second torpedo hit in Number 5 Hatch. &quot; We shall be publishing Mr . Gorski&#39; s account in a later number. J, SEA HISTORY , WINTER 1985-86

I am interested in hearing from anyone with information about Captain James R. Luffman , a sea captain employed by Brett &amp; Vose, New York , or about Brett &amp; Vose itself. MRS. KATHEL . MUNDINGER 1733 Lake Summerset Road Davis, Illinois 61019

I am writing a book on the presence of German U-Boats in the Gulf of Mexico during World War II , with emphasis on merchant ship losses close to the coast. Any anecdotal or first-person material

about the sinkings and the U-boats would be helpful. CAROL L. MEAD Quail Ridge Press Brandon, Mississippi 39042 For a Fall 1986 exhibition of works by the nineteenth-century American marine artist Julian 0. Davidson (1853-1894), I am seeking the whereabouts of original oils, watercolors or drawings by this artist. Anyone knowing the whereabouts of any painting by Davidson should please MRS . LYNN S. BEMAN contact me . 114 Main Street Nyack , New York 10960

Oceanus· The International Magazine of Marine Science and Policy

Invites You to Discover the Titanic! Research ers from the Woods Hole Ocea nographic Institution together with scie ntists from France recently discovered the broken hull of the Titanic at about 13,000 feet on an a lpin e-li ke slope in the North Atlantic. The scientists made the discovery using a new unmanned submersible th at promises to revolution ize und erwater exploration of vast a reas of the deep sea in the months a nd yea rs a head . Read about this exciting event a nd new hi storica l detail s about the s inking of the Titanic in the Winter 1985 issue of Oceanus.