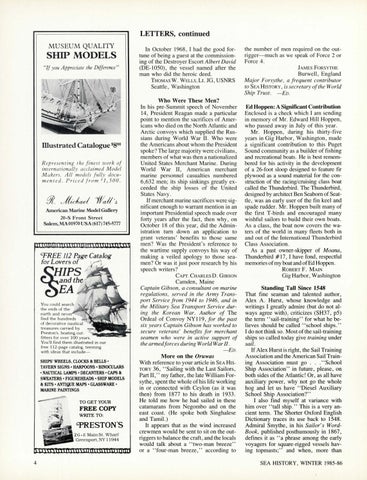 You could search the e nds of the earth a nd neve find the hundreds ~~.~~of decora ti ve na utical ~ treasures ca rried by Preston·s. boating outfitt e rs for ove r l 00 years. You&quot;ll find t he m illustrated in our free 11 2-page catalog, teeming with ideas that include--

In October 1968 , I had the good fortune of being a guest at the commissioning of the Destroyer Escort Albert David (DE- 1050), the vessel named after the man who did the heroic deed . THOMASW. WELLS , Lt. JG , USNRS Seattle , Washington

Who Were These Men? In his pre-Summit speech of November 14, Pres ident Reagan made a particular point to mention the sacrifices of Americans who died on the North Atlantic and Arctic convoys which supplied the Russians during World War II. Who were the Americans about whom the President spoke? The large majority were civilians, members of what was then a nationalized United States Merchant Marine. During World War II , American merchant marine personnel casualties numbered 6,632 men; its ship sinkings greatly exceeded the ship losses of the United States Navy. If merchant marine sacrifices were significant enough to warrant mention in an important Presidential speech made over fo rty years after the fact, then why, on October 18 of this year, did the Administration tum down an application to grant veterans&#39; benefits to those same men? Was the President&#39;s reference to the wartime supply convoys his way of making a veiled apology to those seamen? Or was it just poor research by his speech writers? CAPT. CHARLES D . GIBSON Camden, Maine Captain Gibson, a consultant on marine regulations , served in the Army Transport Service from 1944 to 1946, and in the Military Sea Transport Service during the Korean War . Author of The Ordeal of Convoy NY 119 , for the past six years Captain Gibson has worked to secure veterans&#39; benefits for merchant seamen who were in active support of the armedforces during World War II. - ED .

More on the Oruwas With reference to your article in SEA HISTORY 36, &quot;Sailing with the Last Sailors, Part II ,&#39;&#39; my father, the late William Forsythe , spent the whole of hi s life working in or connected with Ceylon (as it was then) from 1877 to hi s death in 1933 . He told me how he had sailed in these catamarans from Negombo and on the east coast. (He spoke both Singhalese and Tamil.) It appears that as the wind increased crewmen would be sent to sit on the outriggers to balance the craft, and the locals would talk about a &quot; two-man breeze&quot; or a &quot;four-man breeze,&quot; according to

the number of men required on the outrigger-much as we speak of Force 2 or Force 4 . JAMES FORSYTHE Burwell , England Major Forsythe , a frequent contributor to SEA HISTORY , is secretary of the World Ship Trust . -ED.

Ed Hoppen: A Significant Contribution Enclosed is a check which I am sending in memory of Mr. Edward Hill Hoppen, who passed away in Jul y of this year. Mr. Hoppen, during his thirty-five years in Gig Harbor, Washington , made a significant contribution to this Puget Sound community as a builder of fi shing and recreational boats. He is best remembered for his activity in the development of a 26-foot sloop designed to feature fir plywood as a sound material for the construction of the racing/cruising class boat called the Thunderbird . The Thunderbird , designed by architect Ben Seaborn of Seattle, was an early user of the fin keel and spade rudder. Mr. Hoppen built many of the first T-birds and encouraged many wishful sailors to build their own boats . As a class , the boat now covers the waters of the world in many fleets both in and out of the International Thunderbird Class Association. As a past owner-skipper of Moana , Thunderbird # 17 , I have fond , respectful memories of my boat and of Ed Hoppen. ROBERT F. MAIN Gig Harbor , Washington Standing Tall Since 1548 That fine seaman and talented author, Alex A . Hurst, whose knowledge and writings I greatly admire (but do not always agree with) , criticizes (SH37, p5) the term &quot;sail-training&quot; for what he believes should be called &quot;school ships.&quot; I do not think so. Most of the sail-training ships so called today give training under sail. If Alex Hurst is right , the Sail Training Association and the American Sail Training Association must go . . . &quot; School Ship Association&quot; in future , please, on both sides of the Atlantic! Or, as all have auxiliary power, why not go the whole hog and let us have &quot;Diesel Auxiliary School Ship Association?&quot; I also find myself at variance with him over &quot; tall ship.&quot; This is a very ancient term. The Shorter Oxford English Dictionary traces its use back to 1548 . Admiral Smythe, in his Sailor&#39;s WordBook, published posthumously in 1867, defines it as &quot;a phrase among the early voyagers for square-rigged vessels having topmasts;&quot; and when, more than SEA HISTORY , WINTER 1985-86