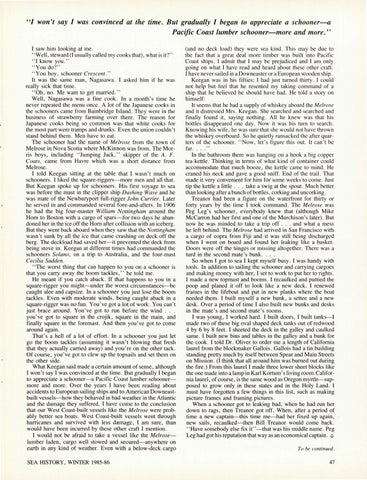 &quot;I won&#39;t say I was convinced at the time. But gradually I began to appreciate a schooner-a Pacific Coast lumber schooner-more and more.&#39;&#39; I saw him looking at me. &quot; Well , steward (I usually called my cooks that), what is it?&quot; &#39;&#39; I know you .&#39;&#39; &quot;You do?&quot; &quot;You boy , schooner Crescent.&quot; It was the same man , Nagasawa. asked him if he was really sick that time . &quot; Oh , no . Me want to get married.&quot; Well , Nagasawa was a fine cook . In a month &#39;s time he never repeated the menu once. A lot of the Japanese cooks in the schooners came from Bainbridge Island . They were in the business of strawberry farming over there . The reason for Japanese cooks being so common was that white cooks for the most part were tramps and drunks. Even the union couldn&#39;t stand behind them. Men have to eat. The schooner had the name of Melrose from the town of Melrose in Nova Scotia where McKinnon was from. The Morris boys, including &quot; Jumping Jack ,&quot; skipper of the A. F . Coats, came from Havre which was a short di stance from Melrose. I told Keegan sitting at the table that I wasn&#39; t much on schooners. I liked the square-riggers- more men and all that. But Keegan spoke up for schooners. His first voyage to sea was before the mast in the clipper ship Dashing Wave and he was mate of the Newburyport full-rigger John Currier. Later he served in and commanded several fore-and-afters. In 1906 he had the big four-master William Nottingham around the Hom to Boston with a cargo of spars-for two days he abandoned her in the ice off the Hom after collision with an iceberg . But they went back aboard when they saw that the Nottingham wasn &#39; t sunk by all the ice that came crashing on deck off the berg . The deckload had saved her- it prevented the deck from being stove in . Keegan at different times had commanded the schooners Solano, on a trip to Australia, and the four-mast Cecilia Sudden. &#39;&#39; The worst thing that can happen to you on a schooner is that you carry away the boom tackles,&quot; he told me . He meant if you catch aback. If that happens to you in a square-rigger you might- under the worst circumstances-be caught alee and capsize. In a schooner you just lose the boom tackles. Even with moderate winds, being caught aback in a square-rigger was no fun . You &#39;ve got a lot of work . You can&#39;t just brace around . You &#39;ve got to run before the wind . . . you&#39;ve got to square in the crojik, square in the main , and finally square in the foremast. And then you &#39; ve got to come around again . That&#39;s a hell of a lot of effort. In a schooner you just let go the boom tackles (assuming it wasn &#39; t blowing that fresh that they actually carried away) and you &#39;re on the other tack . Of course, you&#39;ve got to clew up the topsails and set them on the other side. What Keegan said made a certain amount of sense, although I won&#39;t say I was convinced at the time . But gradually I began to appreciate a schooner-a Pacific Coast lumber schoonermore and more. Over the years I have been reading about accidents to European sailing ships and to American Downeastbuilt vessels-how they behaved in bad weather in the Atlantic and the damage they suffered. I have come to the conclusion that our West Coast-built vessels like the Melrose were probably better sea boats. West Coast-built vessels went through hurricanes and survived with less damage, I am sure, than would have been incurred by these other craft I mention. I would not be afraid to take a vessel like the Melroselumber laden, cargo well stowed and secured-anywhere on earth in any kind of weather. Even with a below-deck cargo SEA HISTORY, WINTER 1985-86

(and no deck load) they were sea kind. This may be due to the fact that a great deal more timber was built into Pacific Coast ships. I admit that I may be prejudiced and I am onl y going on what I have read and heard about these other craft. I have never sailed in a Downeaster or a European wooden ship. Keegan was in hi s fifties; I had just turned thirty. I could not help but feel that he resented my taking command of a ship that he believed he should have had . He told a story on himself: It seems that he had a supply of whiskey aboard the Melrose and it di stressed Mrs. Keegan. She searched and searched and finally found it , saying nothing. All he knew was that his bottles disappeared one day . Now it was hi s turn to search. Knowing his wife , he was sure that she would not have thrown the whiskey overboard. So he quietly ransacked the after quarters of the schooner. &quot; Now , let &#39;s fi gure this out. It can&#39; t be far. . . . &quot; In the bathroom there was hanging on a hook a big copper tea kettle . Thinking in terms of what kind of container could accommodate that much booze , the kettle came to mind . He craned his neck and gave a good sniff. End of the trail. That made it very convenient for him for some weeks to come. Just tip the kettle a little ... take a sw ig at the spout. Much better than looking after a bunch of bottles, corking and uncorking. Treanor had been a figure on the waterfront for thirty or forty years by the time I took command . The Melrose was Peg Leg &#39;s schooner, everybody knew that (although Mike McCarron had her first and one of the Murchi son&#39;s later) . But now he was minded to take a trip off .. . and what a mess he left behind. The Melrose had arrived in San Francisco with a cargo of copra from Fiji and it was still being di scharged when I went on board and found her leaking like a basket. Doors were off the hinges or mi ssi ng altogether. There was a turd in the second mate &#39;s bunk .... So when I got to sea I kept myself busy . I was handy with tools. In addition to sailing the schooner and carrying cargoes and making money with her, I set to work to put her to rights. I made a new topmast and booms. I recaulked and puttied the poop and planed it off to look like a new deck. I renewed frames in the lifeboat and put in new planks where the boat needed them . I built myself a new bunk , a settee and a new desk . Over a period of time I also built new bunks and desks in the mate&#39;s and second mate &#39;s rooms. I was young, I worked hard . I built doors, I built tanks-I made two of these big oval shaped deck tanks out of redwood 4 by 6 by 8 feet. I sheeted the deck in the galley and caulked same. I built new bins and tables in the galley and a bunk for the cook. I told Dr. Oliver to order me a length of California laurel from the blockmaker Gallois. Gallois had a tin building standing pretty much by itself between Spear and Main Streets on Mission . (I think that all around him was burned out during the fire.) From this laurel I made three lower sheet blocks like the one made into a lamp in Karl Kortum&#39;s living room .California laurel , of course, is the same wood as Oregon myrtle-supposed to grow only in these states and in the Holy Land . I must have forgotten a few things in this list , such as making picture frames and framing pictures . When a schooner got to leaking bad , when he had run her down to rags, then Treanor got off. When, after a period of time a new captain-this time me-had her fixed up again , new sails, recaulked-then Bill Treanor would come back. &quot; Have somebody else fix it&quot; -that was his middle name . Peg Leg had got his reputation that way as an economical captain. ,i, To be continued.