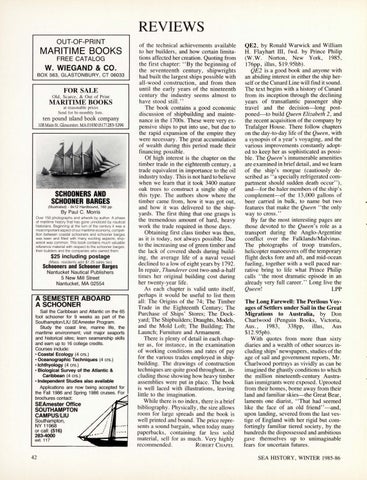 By Paul C. Morris Over 150 photographs and artwork by author. A phase of maritime history that has gone unnoticed by nautical historians. Beginning at the turn of the century it was a

most important aspect of our maritime economy, competition between coastal schooners and schooner barges was keen and filled with many exciting aspects; shipwreck was common. This book contains much valuable reference material with respect to the schooner barges, their builders and the companies who owned them.

A SEMESTER ABOARD A SCHOONER Sail the Caribbean and Atlantic on the 65 foot schooner for 9 weeks as part of the Southampton/LIU SEAmester Program. Study the coast line, marine life, the maritime environment; visit major seaports and historical sites; learn seamanship skills and earn up to 16 college credits. Courses include: •Coastal Ecology (4 crs.) ·Oceanographic Techniques (4 crs.) ·Ichthyology (4 crs.) • Biological Survey of the Atlantic & Caribbean (4 crs.) • Independent Studies also available Applications are now being accepted for the Fall 1986 and Spring 1986 cruises. For brochures contact: SEAmester Office

of the technical achievements available to her builders , and how certain limitations affected her creation . Quoting from the first chapter: " By the beginning of the seventeenth century, shipwrights had built the largest ships possible with all-wood construction , and from then until the early years of the nineteenth century the industry seems almost to have stood still. " The book contains a good economic discussion of shipbuilding and maintenance in the 1700s . These were very expensive ships to put into use, but due to the rapid expansion of the empire they were necessary. The great accumulation of wealth during this period made their financing possible. Of high interest is the chapter on the timber trade in the eighteenth century , a trade equivalent in importance to the oil industry today. This is not hard to believe when we learn that it took 3400 mature oak trees to construct a single ship of this type. The authors show where the timber came from, how it was got out , and how it was delivered to the shipyards. The first thing that one grasps is the tremendous amount of hard , heavy work the trade required in those days . Obtaining first class timber was then, as it is today , not always possible . Due to the increasing use of green timber and the lack of covered sheds during building , the average li fe of a naval vessel declined to a low of eight years by 1792. In repair, Thunderer cost two-and-a-half times her original building cost during her twenty-year life. As each chapter is valid unto itself, perhaps it would be useful to list them al l: The Origins of the 74; The Timber Trade in the Eighteenth Century; The Purchase of Ships' Stores; The Dockyard; The Shipbuilders; Draughts, Models, and the Mold Loft; The Building; The Launch ; Furniture and Armament. There is plenty of detail in each chapter as , for instance , in the examination of worki ng conditions and rates of pay for the various trades employed in shipbuilding . The drawings of construction techniques are quite good throughout , including those showing how heavy timber assemblies were put in place . The book is well laced with illustrations, leaving little to the imagination . While there is no index , there is a brief bibliography. Physically, the size allows room for large spreads and the book is well printed and bound . The price represents a sound bargai n, when today many paperbacks , containing far less solid material , sell for as much . Very highly ROBERT CHAPEL recommended.

QE2 , by Ronald Warwick and William H . Flayhart III, fw d . by Prince Philip (W .W . Norton, New York, 1985 , 176pp , illus, $ 19 .95hb). QE2 is a good book and anyone with an abiding interest in either the ship herself or the Cunard Line will find it sound . The text begins with a history of Cunard from its inception through the declining years of transatlantic passenger ship travel and the decis ion- long postponed-to build Queen Elizabeth 2, and the recent acquisition of the company by Trafalger House . There follow chapters on the day-to-day life of the Queen , with a synopsis of a year's voyaging, and the vario us improvements constantly adopted to keep her as sophi sticated as possible . The Queen's innumerable amenities are examined in brief detail, and we learn of the ship 's morgue (cautiously described as "a specially refrigerated compartment should sudden death occur" ), and- for the haler members of the ship 's complement--of the 13 ,000 gallons of beer carried in bulk, to name but two features that make the Queen '' the only way to cross." By far the most interesting pages are those devoted to the Queen's role as a transport during the Anglo-Argentine conflict over the Falklands/Malvinas. The photographs of troop transfers, helicopter manoeuvres off the temporary flight decks fore and aft, and mid-ocean fueling, together with a well paced narrati ve bring to life what Prince Philip calls " the most dramatic episode in an already very full career." Long live the Queen! LPP

The Long Farewell: The Perilous Voyages of Settlers under Sail in the Great Migrations to Australia, by Don Charlwood (Penguin Books , Victoria, 1983 , 338pp, illus , Aus Aus ., $ 12.95pb). With quotes from more than sixty diaries and a wealth of other sources including ships' newspapers , studies of the age of sail and government reports, Mr. Charlwood portrays as vividly as can be imagined the ghastly conditions to which the million nineteenth-century Australian immigrants were exposed . Uprooted from their homes, borne away from their land and familiar skies-the Great Bear, laments one diarist, '' That had seemed like the face of an old friend " -and , upon landing , severed from the last vestige of England with her rigid but comforting! y familiar tiered society , by the hundreds the dispossessed and ambitious gave themselves up to unimaginable fears for uncertain futures. SEA HISTORY , WINTER 1985-86