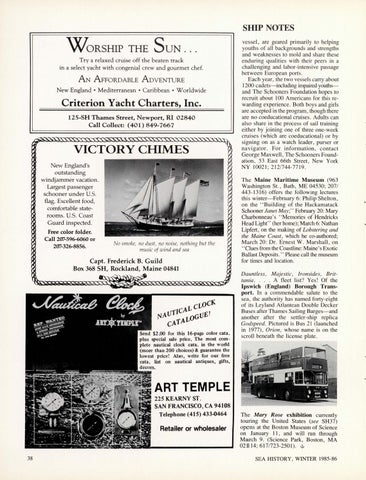 Try a relaxed cruise off the beaten track in a select yacht with congenial crew and gourmet chef. A N AFFO RDABLE A DVENTURE New England • Mediterranean • Caribbean • W orldwide

The Maine Maritime Museum (963 Washington St., Bath , ME 04530; 207/ 443-1316) offers the following lectures thi s winter-February 6: Philip Shelton, on the " Building of the Hackamatac k Schooner Janet May; " February 20: Mary Charbonneau's " Memories of Hendricks Head Light" (her home); March 6: Nathan Lipfert, on the maki ng of Lobstering and the Maine Coast, which he co-authored; March 20: Dr. Ernest W . Marshall , on "Clues from the Coastline: Maine's Exotic Ballast Deposits.' ' Please call the museum for times and location.

Send $2 .00 for this 16-page color cata. plus special sale price. The most complete nautical clock cata. in the world (more than 200 choices) & guarantee the lowest price! Also , write for our free cata. list on nautical antiques , gifts, decors.

vessel, are geared primarily to helping youths of all backgrounds and strengths and weaknesses to mold and share these enduri ng qualities with their peers in a challenging and labor-intensive passage between European ports. Each year, the two vessels carry about 1200 cadets-including impaired youths-and T he Schooners Foundation hopes to recruit about 100 Americans for this rewarding experience . Both boys and girl s are accepted in the program, though there are no coeducational cruises. Adults can also share in the process of sail training either by joining one of three one-week crui ses (which are coeducational) or by signing on as a watch leader, purser or nav igator. For in fo rmation , contac t George Maxwell , The Schooners Foundation, 53 East 66th Street, New York NY 10021; 2 121744-771 9.

Dauntless, Majestic, Ironsides, Brittania . . . . A fleet list? Yes! Of the Ipswich (England) Borough Transport. In a commendable salute to the sea , the authori ty has named forty-eight of its Leyland Atlantean Double Decker Buses after Thames Sailing Barges-and another after the settler-ship replica Godspeed . Pictured is Bus 21 (launched in 1977) , Orion, whose name is on the scroll beneath the license plate.