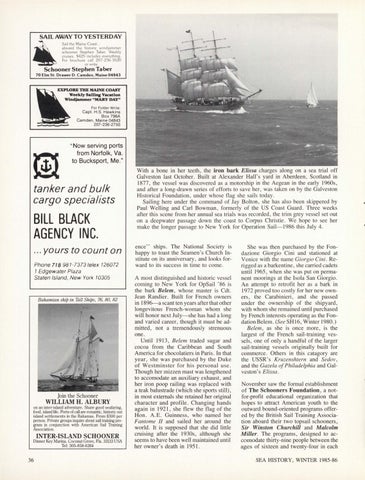 SAIL AWAY TO YESTERDAY Sail the Maine Coast.. aboa rd the historic windjammer

With a bone in her teeth, the iron bark Elissa charges along on a sea trial off Galveston last October. Built at Alexander Hall &#39;s yard in Aberdeen, Scotland in 1877 , the vessel was discovered as a motorship in the Aegean in the early 1960s, and after a long-drawn series of efforts to save her , was taken on by the Galveston Historical Foundation, under whose flag she sails today. Sailing here under the command of Jay Bolton, she has also been skippered by Paul Welling and Carl Bowman, formerly of the US Coast Guard. Three weeks after this scene from her annual sea trials was recorded, the trim grey vessel set out on a deepwater passage down the coast to Corpus Christie. We hope to see her make the longer passage to New York for Operation Sail-1986 this July 4.

ence &quot; ships. The National Society is happy to toast the Seamen&#39;s Church Institute on its anniversary, and looks forward to its success in time to come. A most distinguished and historic vessel coming to New York for OpSail &#39;86 is the bark Belem, whose master is Cdt. Jean Randier. Built for French owners in 1896--a scant ten years after that other longevitous French-woman whom she will honor next July-she has had a long and varied career, though it must be admitted , not a tremendously strenuous one. Until 1913 , Belem traded sugar and cocoa from the Caribbean and South America for chocolatiers in Paris. In that year, she was purchased by the Duke of Westminster for his personal use. Though her mizzen mast was lengthened to accomodate an auxiliary exhaust, and her iron poop railing was replaced with a teak balustrade (which she sports sti ll), in most externals she retained her original character and profile . Changing hands again in 1921, she flew the flag of the Hon. A .E. Guinness , who named her Fantome II and sailed her around the world. It is supposed that she did little cruising after the 1930s , although she seems to have been well maintained until her owner&#39;s death in 1951.

She was then purchased by the Fondazione Giorgio Cini and stationed at Venice with the name Giorgio Cini. Rerigged as a barkentine , she carried cadets until 1965 , when she was put on permanent moorings at the Isola San Giorgio . An attempt to retrofit her as a bark in 1972 proved too costly for her new owners, the Carabinieri , and she passed under the ownership of the shipyard, with whom she remained until purchased by French interests operating as the Fondation Belem. (SeeSHl6, Winter 1980.) Belem, as she is once more , is the largest of the French sail-training vessels, one of only a handful of the larger sail-training vessels originally built for commerce. Others in this catagory are the USSR&#39;s Kruzenshtern and Sedov , and the Gazela of Philadelphia and Galveston&#39;s Elissa. November saw the formal establishment of The Schooners Foundation, a notfor-profit educational organization that hopes to attract American youth to the outward bound-oriented programs offered by the British Sail Training Association aboard their two topsail schooners, Sir Winston Churchill and Malcolm Miller. The programs , designed to accomodate thirty-nine people between the ages of sixteen and twenty-four in each SEA HISTORY, WINTER 1985-86