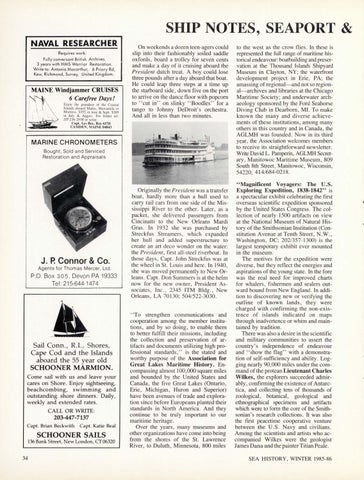 On weekends a dozen teen-agers could slip into their fashionably soiled saddle oxfords, board a trolley for seven cents and make a day of it cruising aboard the President dutch treat. A boy could lose three pounds after a day aboard that boat. He could leap three steps at a time up the starboard side , down five on the port to arrive on the dance floor with popcorn to &quot; cut in&quot; on slinky &quot; Boodles&quot; for a tango to Johnny DeDroit&#39;s orchestra. And all in less than two minutes.

Originally the President was a transfer boat, hardly more than a hull used to carry rail cars from one side of the Mississippi River to the other. Later, as a packet , she delivered passengers from Cincinatti to the New Orleans Mardi Gras . In 1932 she was purchased by Streckfus Streamers , which expanded her hull and added superstructure to create an art deco wonder on the water: the President , first all-steel riverboat. In those days , Capt. John Streckfus was at the wheel in St. Louis and here. In 1940, she was moved permanently to New Orleans. Capt. Don Summers is at the helm now for the new owner, President Associates , Inc. , 2345 ITM Bldg. , New Orleans , LA 70130; 504/522-3030. &#39;&#39;To strengthen communications and cooperation among the member institutions , and by so doing, to enable them to better fulfill their missions, including the collection and preservation of artifacts and documents utilizing high professional standards, &quot; is the stated and worthy purpose of the Association for Great Lakes Maritime History. Encompassing almost 100,000 square miles and bounded by the United States and Canada, the five Great Lakes (Ontario , Erie , Michigan, Huron and Superior) have been avenues of trade and exploration since before Europeans planted their standards in North America . And they continue to be truly important to our maritime heritage . Over the years, many museums and other organizations have come into being from the shores of the St. Lawrence River, to Duluth , Minnesota, 800 miles

to the west as the crow flies. ln these is represented the full range of maritime historical endeavour: boatbuilding and preservation at the Thousand Islands Shipyard Museum in Clayton , NY; the waterfront development project in Erie , PA; the amassing of regional-and not so regional-archives and libraries at the Chicago Maritime Society; and underwater archaeology sponsored by the Ford Seahorse Diving Club in Dearborn, MI. To make known the many and diverse achievements of these institutions, among many others in this country and in Canada, the AGLMH was founded . Now in its third yt&lt;ar, the Association welcomes members to receive its straightforward newsletter. Write David L. Pamperin , AGLMH Secretary , Manitowoc Maritime Museum, 809 South 8th Street, Manitowoc, Wisconsin, 54220; 414/684-0218. &quot;Magnificent Voyagers: The U.S. Exploring Expedition, 1838-1842&quot; is a spectacular exhibit celebrating the first overseas scientific expedition sponsored by the United States Congress. The collection of nearly 1500 artifacts on view at the National Museum of Natural History of the Smithsonian Institution (Constitution A venue at Tenth Street, N. W., Washington , DC; 202/357-1300) is the largest temporary exhibit ever mounted in the museum. The motives for the expedition were diverse, but they reflect the energies and aspirations of the young state . ln the fore was the real need for improved charts for whalers , fishermen and sealers outward bound from New England. In addition to discovering new or verifying the outline of known lands, they were charged with confirming the non-existence of islands indicated on maps through inadvertence or whim and maintained by tradition . There was also a desire in the scientific and military communities to assert the country&#39;s independence of endeavour and &quot; show the flag&quot; with a demonstration of self-sufficiency and ability. Logging nearly 90,000 miles under the command of the protean Lieutenant Charles Wilkes, the explorers succeeded admirably , confirming the existence of Antarctica, and collecting tens of thousands of zoological, botanical, geological and ethnographical specimens and artifacts which were to form the core of the Smithsonian&#39;s research collections. It was also the first peacetime cooperative venture between the U.S. Navy and civilians. Among the scientists and artists who accompanied Wilkes were the geologist James Dana and the painter Titian Peale. SEA HISTORY, WINTER 1985-86