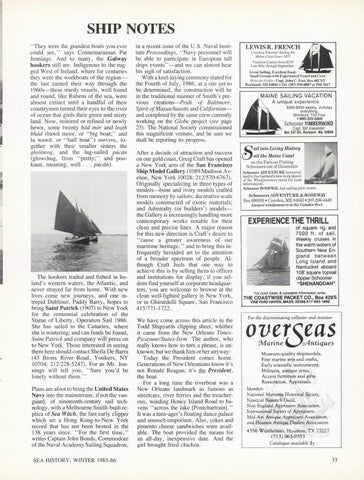 SHIP NOTES &#39;&#39;They were the grandest boats you ever could see ,&#39; &#39; says Connemaraman Pat Jennings. And to many, the Galway hookers still are. Indigenous to the rugged West of Ireland , where for centuries they were the workboats of the regionthe last earned their way through the I 960s- these sturdy vessels, well found and round , like Rubens of the sea, were almost extinct until a handful of their countrymen turned their eyes to the river of ocean that girds their green and misty land . Now, restored or refined or newly hewn , some twenty bad m6r and Leath bhad (bawd moor, or &quot;big boat; &quot; and la wawd, or &quot; half boat&quot;) survive, together with their smaller sisters the gle6iteog, and the lug-sailed pucan (glowchug, from &quot;pretty; &quot; and pookaun, meaning, well ... pucan).

The hookers traded and fished in Ireland &#39;s western waters, the Atlantic, and never strayed far from home . With new lives come new journeys, and one intrepid Dub liner, Paddy Barry, hopes to bring Saint Patrick (1907) to New York for the centennial celebration of the Statue of Liberty, Operation Sail 1986. She has sailed to the Canaries, where she is wintering; and can funds be found, Saint Patrick and company will press on to New York. Those interested in seeing them here should contact Sheila De Barra (43 Bronx River Road, Yonkers, NY 10704; 212/228-5247). For as Mr. Jennings will tell you, &quot;Sure you&#39;d be lonely without them.&quot; Plans are afoot to bring the United States Navy into the mainstream, if not the vanguard, of nineteenth-century sail technology, with a Melbourne Smith-built replica of Sea Witch, the fast early clipper which set a Hong Kong-to-New York record that has not been bested in the 138 years since. &quot;For the first time,&quot; writes Captain John Bonds, Commodore of the Naval Academy Sailing Squadron, SEA HISTORY, WINTER 1985-86

in a recent issue of the U.S. Naval Institute Proceedings, &quot;Navy personnel will be able to participate in European tall ships events&quot;-and we can almost hear his sigh of satisfaction. With a keel-laying ceremony slated for the Fourth of July , 1986, at a site yet to be determined , the construction will be in the traditional manner of Smith&#39;s previous creations-Pride of Baltimore, Spirit of Massachusetts and Californianand completed by the same crew currently working on the Globe project (see page 23). The National Society commissioned this magnificent venture, and be sure we shall be reporting its progress. After a decade of attraction and success on our gold coast, Greig Craft has opened a New York arm of the San Francisco Ship Model Gallery (I 089 Madison Avenue, New York 10028; 212/570-6767). Originally specializing in three types of models-bone and ivory models crafted from memory by sailors; decorative scale models constructed of exotic materials; and Admiralty (or builders &#39;) modelsthe Gallery is increasingly handling more contemporary works notable for their clean and precise lines. A major reason for this new direction is Craft&#39;s desire to &quot;cause a greater awareness of our maritime heritage ,&#39;&#39; and to bring this infrequently heralded art to the attention of a broader spectrum of people. Although Craft feels that one way to achieve this is by selling them to offices and institutions for display, if you seldom find yourself at corporate headquarters, you are welcome to browse at the clean well-lighted gallery in New York, or in Ghirardelli Square, San Francisco 4151771-1722. We have come across this article in the Todd Shipyards clipping sheet, whither it came from the New Orleans TimesPicayune!States-ltem. The author, who really knows how to tum a phrase, is unknown; but we thank him or her anyway: Today the President comes home. Generations of New Orleanians know it&#39;s not Ronald Reagan; it&#39;s the President, the boat. For a long time the riverboat was a New Orleans landmark as famous as streetcars, river ferries and the treacherous, winding Honey Island Road to havens &quot;across the Jake [Pontchartrain].&quot; It was a teen-ager&#39;s floating dance palace and smooch emporium . Also, cokes and pimento cheese sandwiches were available. The boat provided the means for an all-day, inexpensive date . And the girl brought fried chicken.

For the discriminating collector and in11estor