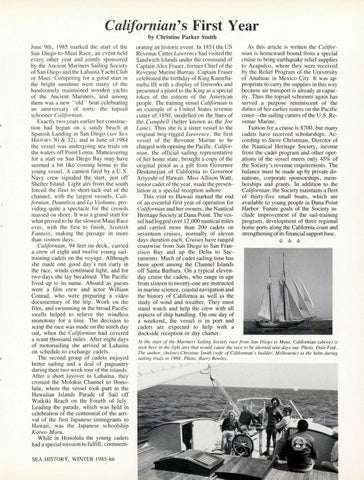 Californian's First Year by Christine Parker Smith June 9th, 1985 marked the start of the San Diego-to-Maui Race, an event held every other year and jointly sponsored by the Ancient Mariners Sailing Society of San Diego and the Lahaina Yacht Club or Maui. Competing for a good start in the bright sunshine were many of the handsomely maintained wooden yachts of the Ancient Mariners, and among them was a new "old " boat celebrating an anniversary of sorts: the topsail schooner Californian. Exactly two years earlier her construction had begun on a sandy beach at Spanish Landing in San Diego (see SEA HISTORY 30 & 32), and in June of 1984 the vessel was undergoing sea trials on the waters off Point Loma. Maneuvering for a start on San Diego Bay may have seemed a bit like coming home to the young vessel. A cannon fired by a U.S. Navy crew signaled the start, just off Shelter Jsland. Light airs from the south forced the fleet to short-tack out of the channel, with the largest vessels, Californian, Dauntless and La Violante, providing quite a spectacle for the crowds massed on shore. It was a grand start for what proved to be the slowest Maui Race ever, with the first to finish , Scottish Fantasy, making the passage in more than sixteen days. Californian, 94 feet on deck, carried a crew of eight and twelve young sailtraining cadets on the voyage. Although she made one good day ' s run early in the race , winds continued light , and for two days she lay becalmed. The Pacific lived up to its name . Aboard as guests were a film crew and actor William Conrad, who were preparing a video documentary of the trip. Work on the film, and swimming in the broad Pacific swells helped to relieve the windless monotony for a time. The decision to scrap the race was made on the ninth day out, when the Californian had covered a scant thousand miles. After eight days of motorsailing she arrived at Lahaina on schedule to exchange cadets. The second group of cadets enjoyed better sailing and a deal of pageantry during their two week tour of the islands. After a short layover in Lahaina , they crossed the Molokai Channel to Honolulu, where the vessel took part in the Hawaiian Islands Parade of Sail off Waikiki Beach on the Fourth of July. Leading the parade, which was held in celebration of the centennial of the arrival of the first Japanese immigrants to Hawaii, was the Japanese schoolship Kaiwo Maru. While in Honolulu the young cadets had a special mission to fulfill, commemSEA HISTORY , WINTER 1985-86

orating an historic event. In 1851 the US Revenue Cutter Lawrence had visited the Sandwich Islands under the command of Captain Alex Fraser, former Chief of the Revenue Marine Bureau . Captain Fraser celebrated the birthday of King Kamehameha III with a display of fireworks and presented a pistol to the King as a special token of the esteem of the American people. The training vessel Californian is an example of a United States revenue cutter of 1850, modelled on the lines of the Campbell (better known as the Joe Lane). Thus she is a sister vessel to the original brig-rigged Lawrence , the first vessel of the Revenue Marine to be charged with opening the Pacific. Californian, the official sailing representative of her home state, brought a copy of the original pistol as a gift from Governor Deukmejian of California to Governor Ariyoshi of Hawaii. Miss Allison Watt, senior cadet of the year, made the presentation at a special reception ashore. This visit to Hawaii marked the end of an eventful first year of operation for Californian and her owners, the Nautical Heritage Society at Dana Point. The vessel had logged over 12,000 nautical miles and carried more than 200 cadets on seventeen cruises, normally of eleven days duration each. Cruises have ranged coastwise from San Diego to San Francisco Bay and up the Delta to Sacramento. Much of cadet sailing time has been spent among the Channel Islands off Santa Barbara. On a typical elevenday cruise the cadets, who range in age from sixteen to twenty-one are instructed in marine science, coastal navigation and the history of California as well as the study of wind and weather. They must stand watch and help the crew with all aspects of ship handling. On one day of a weekend, the vessel is in port and cadets are expected to help with a dockside reception or day charter.

As this article is written the Californian is homeward bound from a special cruise to bring earthquake relief supplies to Acapulco, where they were received by the Relief Program of the University of Anahuac in Mexico City. It was appropriate to carry the supplies in this way because air transport is already at capacity . Thus the topsail schooner again has served a purpose reminiscent of the duties of her earlier sisters on the Pacific coast-the sailing cutters of the U.S . Revenue Marine . Tuition for a cruise is $700, but many cadets have received scholarships. According to Steve Christman, Director of the Nautical Heritage Society, income from the cadet program and other operations of the vessel meets only 45 % of the Society's revenue requirements. The balance must be made up by private donations, corporate sponsorships, memberships and grants. In addition to the Californian, the Society maintains a fleet of thirty-five small boats, which are available to young people in Dana Point Harbor. Future goals of the Society include improvement of the sail-training program , development of three regional home ports along the California coast and strengthening of its financial support base .

At the start of the Mariners Sailing Society race from San Diego to Maui, Californian (above) is seen here in the light airs that would cause the race to be aborted nine days out. Photo, Dale Fink . The author, (below) Christine Smith (wife a/Californian's builder, Melbourne) at the helm during sailing trials in 1984. Photo, Barry Bowles.