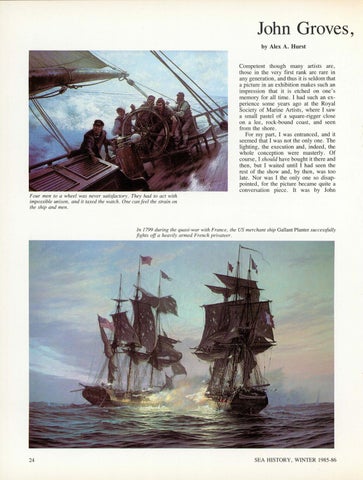 John Groves, by Alex A. Hurst

Competent though many artists are, those in the very first rank are rare in any generation, and thus it is seldom that a picture in an exhibition makes such an impression that it is etched on one's memory for all time. I had such an experience some years ago at the Royal Society of Marine Artists , where I saw a small pastel of a square-rigger close on a lee, rock-bound coast, and seen from the shore. For my part, I was entranced , and it seemed that I was not the only one. The lighting , the execution and, indeed , the whole conception were masterly . Of course, I should have bought it there and then, but I waited until I had seen the rest of the show and, by then, was too late . Nor was I the only one so disappointed , for the picture became quite a conversation piece . It was by John Four men to a wheel was never satisfactory . They had to act with impossible unison, and it taxed the watch . One can f eel the strain on the ship and men.

In 1799 during the quasi-war with France , the US merchant ship Gallant Planter successfully fights off a heavily armed French privateer.