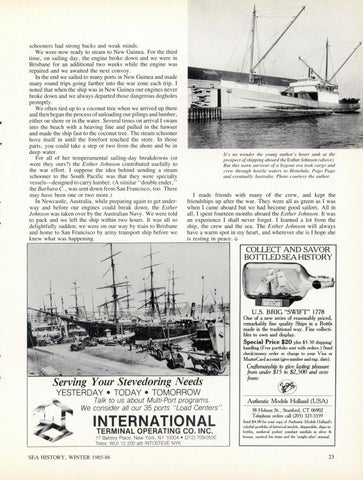 schooners had strong backs and weak minds. We were now ready to steam to New Guinea. For the third time, on sailing day, the engine broke down and we were in Brisbane for an additional two weeks while the engine was repaired and we awaited the next convoy. In the end we sailed to many ports in New Guinea and made many round trips going farther into the war zone each trip. I noted that when the ship was in New Guinea our engines never broke down and we always departed those dangerous dogholes promptly. We often tied up to a coconut tree when we arrived up there and then began the process of unloading our pilings and lumber, either on shore or in the water. Several times on arrival I swam into the beach with a heaving line and pulled in the hawser and made the ship fast to the coconut tree. The steam schooner hove itself in until the forefoot touched the store. In those parts , you could take a step or two from the shore and be in deep water. For all of her temperamental sailing-day breakdowns (or were they ours?) the Esther Johnson contributed usefully to the war effort. I suppose the idea behind sending a steam schooner to the South Pacific was that they were specialty vessels--designed to carry lumber. (A similar "double ender," the Barbara C., was sent down from San Francisco, too. There may have been one or two more.) In Newcastle, Australia, while preparing again to get underway and before our engines could break down, the Esther Johnson was taken over by the Australian Navy. We were told to pack and we left the ship within two hours. It was all so delightfully sudden; we were on our way by train to Brisbane and home to San Francisco by army transport ship before we knew what was happening.

It's no wonder the young author's heart sank at the prospect of shipping aboard the Esther Johnson (above). But this worn survivor of a bygone era took cargo and crew through hostile waters to Honolulu, Pago Pago and eventually Australia. Photo courtesy the author.

I made friends with many of the crew, and kept the friendships up after the war. They were all as green as I was when I came aboard but we had become good sailors. All in all , I spent fourteen months aboard the Esther Johnson . It was an experience I shall never forget. I learned a lot from the ship, the crew and the sea. The Esther Johnson will always have a warm spot in my heart , and wherever she is I hope she is resting in peace. J,

U.S. BRIG "SWIFT" 1778 One of a new series of reasonably priced, remarkably fine quality Ships in a Bottle made in the traditional way. Fine collectibles to own and display.

Special Price $20 plus $3.50 shipping/ handling (Free portfolio sent with orders.) Send check/money order or charge to your Visa or MasterCard account (give number and exp. date).

Craftsmanship to give lasting pleasure from under $15 to $2 ,500 and over from:

YESTERDAY • TODAY • TOMORROW Talk to us about Multi-Port programs. We consider all our 35 ports " Load Centers ".

fun items and the 'sought-after' unusual.