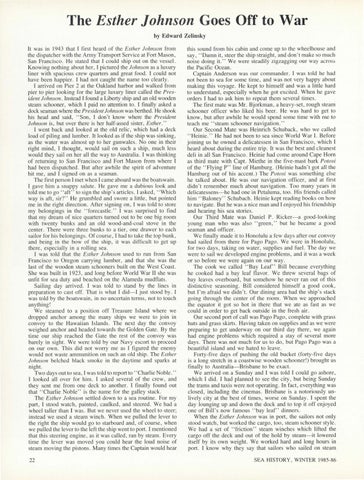 The Esther Johnson Goes Off to War by Edward Zelinsky It was in 1943 that I first heard of the Esther Johnson from the dispatcher with the Army Transport Service at Fort Mason , San Francisco. He stated that I could ship out on the vessel. Knowing nothing about her, I pictured the Johnson as a luxury liner with spacious crew quarters and great food. I could not have been happier. I had not caught the name too clearly. I arrived on Pier 2 at the Oakland harbor and walked from pier to pier looking for the large luxury liner called the President Johnson. Instead I found a Liberty ship and an old wooden steam schooner, which I paid no attention to. I finally asked a dock seaman where the President Johnson was berthed. He shook his head and said, "Son, I don't know where the President Johnson is , but over there is her half-assed sister, Esther." I went back and looked at the old re lic, which had a deck load of piling and lumber. It looked as if the ship was sinking, as the water was almost up to her gunwales. No one in their right mind, I thought, would sail on such a ship, much less would they sail on her all the way to Australia . I was thinking of returning to San ÂˇFrancisco and Fort Mason from where I had been dispatched. But after awhile the spirit of adventure hit me , and I signed on as a seaman . The first person I met when I came aboard was the boatswain . I gave him a snappy salute. He gave me a dubious look and told me to go "aft" to sign the ship's articles. 1 asked, " Which way is aft, sir? " He grumbled and swore a little, but pointed me in the right direction . After signing on, I was told to store my belongings in the "forecastle. " I was surprised to find that my dream of nice quarters turned out to be one big room with twenty bunks and an old wood-and-coal stove in the center. There were three bunks to a tier, one drawer to each sailor for his belongings. Of course, I had to take the top bunk , and being in the bow of the ship , it was difficult to get up there, especially in a rolling sea. I was told that the Esther Johnson used to run from San Francisco to Oregon carrying lumber, and that she was the last of the wooden steam schooners built on the West Coast. She was built in I 923, and long before World War II she was unfit for sea duty and beached on the Alameda mudflats . Sailing day arrived. I was told to stand by the lines in preparation to cast off. That is what I did-I just stood by. I was told by the boatswain , in no uncertain terms, not to touch anything! We steamed to a position off Treasure Island where we dropped anchor among the many ships we were to join in convoy to the Hawaiian Islands. The next day the convoy weighed anchor and headed towards the Golden Gate. By the time our sh ip reached the Gate the rest of the convoy was barely in sight. We were told by our Navy escort to proceed on our own. This did not worry me as I figured the enemy would not waste ammunition on such an old ship. The Esther Johnson belched black smoke in the daytime and sparks at night. Two days out to sea, J was told to report to' 'Charlie Noble.'' I looked all over for him. J asked several of the crew, and they sent me from one deck to another. I finally found out that "Charlie Noble" is the name for the galley stack. The Esther Johnson settled down to a sea routine. For my part, I stood watch, painted , caulked, and steered. We had a wheel taller than I was . But we never used the wheel to steer; instead we used a steam winch. When we pulled the lever to the right the ship would go to starboard and, of course, when we pulled the lever to the left the ship went to port. I mentioned that this steering engine, as it was called, ran by steam. Every time the lever was moved you cou ld hear the loud noise of steam moving the pistons. Many times the Captain would hear

this sound from his cabin and come up to the wheelhouse and say, " Damn it, steer the ship straight, and don't make so much noise doing it. " We were stead ily zigzagging our way across the Pacific Ocean. Captain Anderson was our commander. J was told he had not been to sea for some time, and was not very happy about making this voyage. He kept to himself and was a little hard to understand, especiall y when he got excited . When he gave orders I had to ask him to repeat them several times. The first mate was Mr. Bjorkman, a heavy-set, rough steam schooner officer who liked his beer. He was hard to get to know, but after awhile he would spend some time with me to teach me "steam schooner navigation ." Our Second Mate was Heinrich Schuback , who we called "Heinie." He had not been to sea since World War I. Before joining us he owned a delicatessen in San Francisco, which I heard about during the entire trip. It was the best and cleanest deli in all San Francisco. Heinie had come arou nd Cape Horn as third mate with Capt. Miethe in the five-mast bark Potosi of the " Flying P" line of Hamburg . (Heinie hadn ' t got all the Hamburg out of his accent.) The Potosi was someth ing else he talked abo ut. He was our navigation officer, and at first didn ' t remember much about navigation. Too many years in delicatessens-he had one in Petaluma, too . His friends ca ll ed him "Baloney" Schubach. Heinie kept reading books on how to navigate . But he was a nice man and I enjoyed his friendship and hearing his sea stories. Our Third Mate was Daniel P. Ricker-a good- looking young man who was also "green," but he became a good seaman and officer. We finally made it to Honolulu a few days after our convoy had sailed from there for Pago Pago. We were in Honolulu, for two days, taking on water, supplies and fuel. The day we were to sai l we developed engine problems, and it was a week or so before we were again on our way. The cook we called "Bay Leaf" Bill because everything he cooked had a bay leaf flavor. We threw several bags of bay leaves overboard, but somehow he never ran out of this distinctive seasoning. Bill considered himself a good cook, but I'm afraid we didn ' t. Our dining area had the ship's stack going through the center of the room. When we approached the equator it got so hot in there that we ate as fast as we could in order to get back outside in the fresh air. Our second port of call was Pago Pago , complete with grass huts and grass skirts. Having taken on supplies and as we were preparing to get underway on our third day there , we again had engine problems which required a stay of several more days. There was not much for us to do , but Pago Pago was a beautiful island and we hated to leave. Forty-five days of pushing the old bucket (forty-five days is a long stretch in a coastwise wooden schooner!) brought us finally to Australia- Brisbane to be exact. We arrived on a Sunday and I was told I cou ld go ashore, which I did . I had planned to see the city, but being Sunday the trams and taxis were not operating. In fact, everything was closed , including the cinemas. Brisbane is a notoriously unlively city at the best of times , worse on Sunday . I spent the day lounging up and down the dock and to top it off enjoyed one of Bill's now famous " bay leaf" dinners. When the Esther Johnson was in port, the sai lors not only stood watch , but worked the cargo, too, steam schooner style. We had a set of "friction" steam winches which lifted the cargo off the deck and out of the hold by steam-it lowered itself by its own weight. We worked hard and long hours in port. I know why they say that sailors who sailed on steam SEA HISTORY , WINTER 1985-86