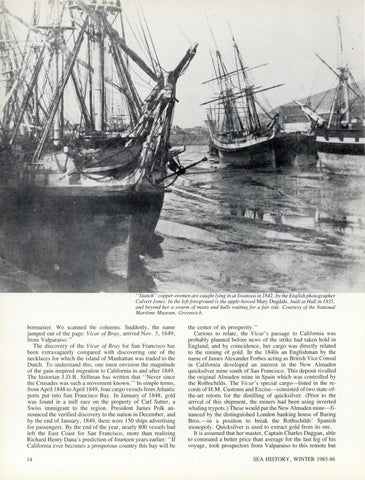 ''Stanch'' copper-oremen are caught lying in at Swansea in 1842, by the English photographer Calvert Jones. Jn the left foreground is the apple-bowed Mary Dugdale, built at Hull in 1835, and beyond her a swarm of masts and hulls waiting for a fair tide. Courtesy of the National Maritime Museum, Greenwich.

bormaster. We scanned the columns. Suddenly , the name jumped out of the page: Vicar of Bray, arrived Nov. 3, 1849, from Valparaiso. " T he discovery of the Vicar of Bray for San Francisco has been extravagantly compared with d iscovering one of the necklaces for which the island of Manhattan was traded to the Dutch. To understand this, one must envision the magnitude of the gain-inspired migration to Cali forn ia in and after 1849. The historian J.D .B . Stillman has written that " Never since the Crusades was such a movement known." In simple terms, from April 1848 to April 1849, four cargo vessels from Atlantic ports put into San Francisco Bay. In Ja nuary of 1848 , gold was fo und in a mill race on the property of Carl Sutter, a Swiss immigrant to the region . President James Polk announced the verified discovery to the nation in December , and by the end of January , 1849, there were 150 ships advertising for passengers . By the end of the year, nearly 800 vessels had left the East Coast for San Francisco, more than realizing Richard Henry Dana's prediction of fo urteen years earlier: "If Cali forn ia ever becomes a prosperous country this bay will be 14

the center of its prosperity." Curious to relate , the Vicar's passage to California was probably planned before news of the strike had taken hold in England ; and by coincidence, her cargo was directly related to the mining of gold . In the 1840s an Englishman by the name of James Alexander Forbes acting as British Vice Consul in California developed an interest in the New Almaden quicksi lver mine south of San Francisco . This deposit rivalled the original Almaden mine in Spain which was controlled by the Rothschilds . The Vicar's special cargo-listed in the records of H.M . Customs and Excise--consisted of two state-ofthe-art retorts for the distilling of quicksilver. (Prior to the arrival of this shipment, the miners had been using inverted whaling trypots.) These would put the New Almaden mine- financed by the distinguished London banking house of Baring Bros.-in a position to break the Rothschilds' Spanish monopoly. Quicksilver is used to extract gold from its ore . It is assumed that her master, Captain Charles Duggan , able to command a better price than average for the last leg of his voyage, took prospectors from Valparaiso to this remote but SEA HISTORY , WINTER 1985-86