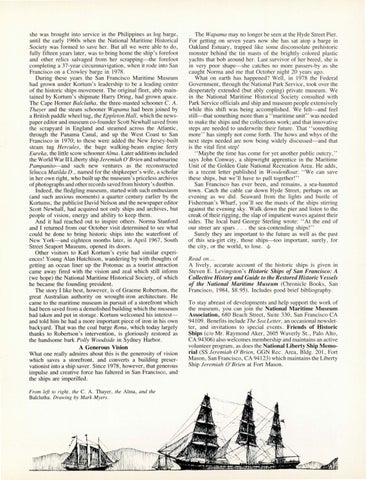 she was brought into service in the Philippines as log barge, until the early 1960s when the National Maritime Hi storical Society was formed to save her. But all we were able to do, fully fifteen years later, was to bring home the ship&#39;s forefoot and other relics salvaged from her scrappi ng-the forefoot completing a 37-year circumnavigation, when it rode into San Francisco on a Crowley barge in 1978. During these years the San Francisco Maritime Museum had grown under Kortum &#39;s leadership to be a leading center of the historic ships movement. The original fleet , ably maintained by Kortum &#39;s shipmate Harry Dring , had grown apace. The Cape Homer Balclutha, the three-masted schooner C. A. Thayer and the steam schooner Wapama had been joined by a British paddle wheel tug , the Eppleton Hall , which the newspaper editor and museum co-founder Scott Newhall saved from the scrapyard in England and steamed across the Atlantic, through the Panama Canal, and up the West Coast to San Francisco in 1970; to these were added the New Jersey-built steam tug Hercules, the huge walking-beam engine ferry Eureka, the little scow schooner Alma. Later additions included the World War II Liberty ship Jeremiah O&#39; Brien and submarine Pampanito--and such new ventures as the reconstructed felucca Matilda D. , named for the shipkeeper&#39;s wife, a scholar in her own right, who built up the museum &#39;s priceless archives of photographs and other records saved from hi story &#39;s dustbin . Indeed , the fledglin g museum , started with such enthusiasm (and such anxious moments) a quarter century earlier by the Kortums , the publicist David Nelson and the newspaper editor Scott Newhall , had acquired not only ships and archives , but people of vision, energy and ability to keep them . And it had reached out to inspire others. Norma Stanford and I returned from our October visit determined to see what could be done to bring historic ships into the waterfront of New York-and eighteen months later, in April 1967 , South Street Seaport Museum , opened its doors . Other visitors to Karl Kortum &#39;s eyrie had similar experiences! Young Alan Hutchison , wandering by with thoughts of getting an ocean liner up the Potomac as a tourist attraction came away fired with the vision and zeal which still inform (we hope) the National Maritime Historical Society, of which he became the founding president. The story I like best , however, is of Graeme Robertson , the great Australian authority on wrought-iron architecture. He came to the maritime museum in pursuit of a storefront which had been saved from a demolished building which the museum had taken and put in storage. Kortum welcomed hjs interestand told him he had a more important piece of iron in hi s own backyard . That was the coal barge Rona , which today largely thanks to Robertson&#39;s intervention , is gloriously restored as the handsome bark Polly Woodside in Sydney Harbor. A Generous Vision What one really admires about thi s is the generosity of vision which saves a storefront, and converts a building preservationist into a ship saver. Since 1978 , however, that generous impulse and creative force has faltered in San Francisco , and the ships are imperilled. From left to right , the C. A. Thayer, the Alma, and the Balclutha. Drawing by Mark Myers .

The Wapama may no longer be seen at the Hyde Street Pier. For getting on seven years now she has sat atop a barge in Oakland Estuary, trapped like some disconsolate prehistoric monster behind the tin masts of the brightly colored plastic yachts that bob around her. Last survivor of her breed, she is in very poor shape-she catches no more passers-by as she caught Norma and me that October night 20 years ago. What on earth has happened? Well , in 1978 the Federal Government , through the National Park Service, took over the desperately extended (but ably coping) private museum . We in the National Maritime Historical Society consulted with Park Service officials and ship and museum people extensively while this shift was being accomplished . We felt-and feel still-that something more than a &quot; maritime unit&quot; was needed to make the ships and the collections work; and that innovative steps are needed to underwrite their future. That &quot; something more&quot; has simply not come forth. The hows and whys of the next steps needed are now being widely discussed-and that is the vital first step! &#39;&#39; Maybe the time has come for yet another public outcry,&#39;&#39; says John Conway, a shipwright apprentice in the Maritime Unit of the Golden Gate National Recreation Area. He adds , in a recent letter published in WoodenBoat: &quot;We can save these ships , but we&#39;ll have to pull together!&quot; San Francisco has ever been , and remains , a sea-haunted town. Catch the cable car down Hyde Street, perhaps on an evening as we did . Seaward from the lights and bustle of Fisherman&#39;s Wharf, you &#39; ll see the masts of the ships stirring against the evening sky . Walk down the pier and listen to the creak of their rigging, the slap of impatient waves against their sides. The local bard George Sterling wrote: &quot; At the end of our street are spars .. . the sea-contending ships! &quot; Surely they are important to the future as well as the past of this sea-gi rt city, those ships-too important, surely , for the city, or the world , to lose. .t