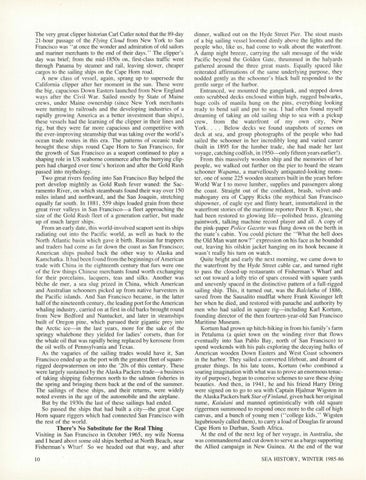 The very great clipper historian Carl Cutler noted that the 89-day 21-hour passage of the Flying Cloud from New York to San Francisco was "at once the wonder and admiration of old sailors and mariner merchants to the end of their days." The clipper' s day was brief; from the mid- I 850s on, first-class traffic went through Panama by steamer and rail, leaving slower, cheaper cargos to the sailing ships on the Cape Hom road. A new class of vessel, again, sprang up to supersede the California clipper after her moment in the sun. These were the big , capacious Down Easters launched from New England ways after the Civil War. Sailed mostly by State of Maine crews, under Maine ownership (since New York merchants were turning to railroads and the developing industries of a rapidly growing America as a better investment than ships), these vessels had the learning of the clipper in their lines and rig, but they were far more capacious and competitive with the ever-improving steamship that was taking over the world 's ocean trade routes in this era. The patterns of oceanic trade brought these ships round Cape Hom to San Francisco , for the growth of San Francisco as a seaport continued to play a shaping role in US seaborne commerce after the hurrying clippers had charged over time's horizon and after the Gold Rush passed into mythology. Two great rivers feeding into San Francisco Bay helped the port develop mightily as Gold Rush fever waned: the Sacramento River, on which steamboats found their way over 150 miles inland and northward , and the San Joaquin, stretching equally far south. [n 1881, 559 ships loaded grain from these great river valleys in San Francisco--a fleet approaching the size of the Gold Rush fleet of a generation earlier, but made up of much larger ships. From an early date , this world-involved seaport sent its ships radiating out into the Pacific world, as well as back to the North Atlantic basin which gave it birth . Russian fur trappers and traders had come as far down the coast as San Francisco; American ships pushed back the other way to Alaska and Kamchatka. It had been fou nd from the beginnings of American trade with China in the eighteenth century that furs were one of the few things Chinese merchants found worth exchanging for their porcelains, lacquers , teas and silks. Another was beche de mer, a sea slug prized in China, which American and Australian schooners picked up from native harvesters in the Pacific islands. And San Francisco became , in the latter half of the nineteenth century, the leading port for the American whaling industry, carried on at first in old barks brought round from New Bedford and Nantucket, and later in steamships built of Oregon pine, which pursued their gigantic prey into the Arctic ice- in the last years, more for the sake of the springy whalebone they yielded for ladies ' corsets, than for the whale oil that was rapidly being replaced by kerosene from the oil wells of Pennsylvania and Texas. As the vagaries of the sailing trades would have it , San Francisco ended up as the port with the greatest fleet of squarerigged deepwatermen on into the '20s of this century . These were largely sustained by the Alaska Packers trade-a business of taking shipping fishermen north to the salmon fisheries in the spring and bringing them back at the end of the summer. The sailings of these ships, and their returns, were widely noted events in the age of the automobile and the airplane. But by the 1930s the last of these sai lings had ended. So passed the ships that had built a city-the great Cape Hom square riggers which had connected San Francisco with the rest of the world.

There's No Substitute for the Real Thing Visiting in San Francisco in October 1965, my wife Norma and I heard about some old ships berthed at North Beach, near Fisherman's Wharf. So we headed out that way, and after 10

dinner, walked out on the Hyde Street Pier. The stout masts of a big sailing vessel loomed dimly above the lights and the people who, like us, had come to walk about the waterfront. A damp night breeze , carrying the salt message of the wide Pacific beyond the Golden Gate , thrummed in the halyards gathered around the three great masts. Equally spaced like reiterated affirmations of the same underlying purpose, they nodded gently as the schooner's black hull responded to the gentle surge of the harbor . Entranced, we mounted the gangplank, and stepped down onto scrubbed decks enclosed within high , rugged bulwarks, huge coils of manila hung on the pins, everything looking ready to bend sail and put to sea. l had often found myself dreaming of taking an old sailing ship to sea with a pickup crew, from the waterfront of my own city, New York. . . . Below decks we found snapshots of scenes on deck at sea, and group photographs of the people who had sailed the schooner in her incredibly long and varied career (built in 1895 for the lumber trade , she had made her last voyage, catching codfish, in 1950--only fifteen years earlier!). From this massively wooden ship and the memories of her people, we walked out further on the pier to board the steam schooner Wapama, a marvellously antiquated-looking monster , one of some 225 wooden steamers built in the years before World War I to move lumber, supplies and passengers along the coast. Straight out of the confident, brash, velvet-andmahogany era of Cappy Ricks (the mythical San Francisco shipowner, of eagle eye and flinty heart , immortalized in the waterfront stories of the maritime reporter Peter B . Kyne), she had been restored to glowing life- polished brass , gleaming paintwork, talking machine record player and all. A copy of the pink-paper Police Gazette was flung down on the berth in the mate 's cabin. You could picture the "What the hell does the Old Man want now?" expression on his face as he bounded out, leaving his oilskin jacket hanging on its hook because it wasn't really his tum on watch. Quite bright and early the next morning, we came down to the waterfront by the Hyde Street cable car, and turned right to pass the closed-up restaurants of Fisherman 's Wharf and set out toward a lofty trio of spars crossed with square yards and unevenly spaced in the distinctive pattern of a full-rigged sailing ship. This, it turned out, was the Balclutha of 1886, saved from the Sausalito mudflat where Frank Kissinger left her when he died, and restored with panache and authority by men who had sailed in square rig-including Karl Kortum , founding director of the then fourteen-year-old San Francisco Maritime Museum . Kortum had grown up hitch-hiking in from his family's farm in Petaluma (a quiet town on the winding river that flows eventually into San Pablo Bay, north of San Francisco) to spend weekends with his pals exploring the decaying hulks of American wooden Down Easters and West Coast schooners in the harbor. They sailed a converted lifeboat, and dreamt of greater things . In his late teens, Kortum (who combined a soaring imagination with what was to prove an enormous tenacity of purpose), began to conceive schemes to save these dying beauties . And then, in 1941, he and his friend Harry Dring were signed on to go to sea with Captain Hjalmar Wigsten in the Alaska Packers bark Star of Finland, given back her original name , Kaiulani and manned optimistically with old square riggermen summoned to respond once more to the call of high canvas, and a bunch of young men ("college kids," Wigs ten lugubriously called them) , to carry a load of Douglas fu around Cape Hom to Durban, South Africa. At the end of the next leg of her voyage, in Australia, she was commandeered and cut down to serve as a barge supporting the Allied campaign in New Guinea . At the end of the war SEA HISTORY, WINTER 1985-86