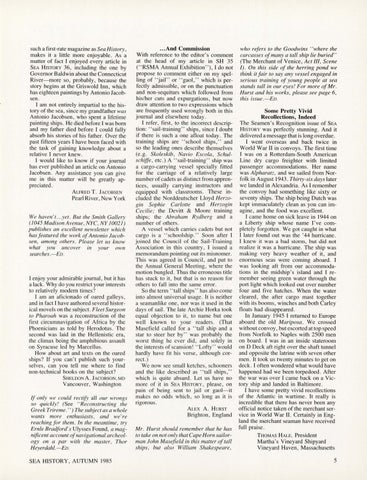 such a first-rate magazine as Sea History , makes it a little more enjoyable. As a matter of fact I enjoyed every article in SEA HISTORY 36, including the one by Governor Baldwin about the Connecticut River- more so, probably , because the story begins at the Griswold Inn , which has eighteen paintings by Antonio Jacobsen. I am not entirely impartial to the history of the sea, since my grandfather was Antonio Jacobsen , who spent a lifetime painting ships. He died before I was born and my father died before I could fully absorb his stories of his father. Over the past fifteen years I have been faced with the task of gaining knowledge about a relative I never knew . I would like to know if yo ur journal has ever published an article on Antonio Jacobsen. Any assistance you can give me in this matter will be greatly appreciated . ALFRED T . JACOBSEN Pearl Ri ver, New York

We haven&#39;t .. .yet. But the Smith Gallery (1045 Madison Avenue, NYC, NY 10021) publishes an excellent newsletter which has featured the work of Antonio Jacobsen, among others . Please let us know what you uncover in your own searches .-ED.

I enjoy your admirable journal, but it has a lack . Why do you restrict your interests to relatively modern times? I am an aficionado of oared galleys , and in fact I have authored several hi storical movel s on the subject. Fleet Surgeon to Pharoah was a reconstruction of the first circumnavigation of Africa by the Phoenicians as told by Herodotus. The second was laid in the Hellenistic era, the climax being the amphibious assault on Syracuse led by Marcellus. How about art and texts on the oared ships? If you can&#39; t publish such yourselves , can you tell me where to find non-technical books on the subject? SHELDON A. JACOBSON , MD Vancouver, Washington

if only we could rectify all our wrongs so quickly! (See &quot; Reconstructing the Greek Trireme.&#39; &#39; ) The subject as a whole wants more enthusiasts, and we&#39; re reaching for them. In the meantime, try Ernie Bradford&#39;s Ulysses Found, a magnificent account of navigational archeology on a par with the master, Thor Heyerdahl.-ED. SEA HISTORY , AUTUMN 1985

... And Commission who refers to the Goodwins &quot;where the With reference to the editor&#39;s comment carcasses of many a tall ship lie buried&#39;&#39; at the head of my article in SH 35 (The Merchant of Venice , Act 111, Scene (&quot;RSMA Annual Exhibition&quot;), I do not /) . On this side of the herring pond we propose to comment either on my spel- think it fair to say any vessel engaged in ling of &quot; jail &quot; or &quot;gaol,&quot; which is per- serious training of young people at sea fectly admissible, or on the punctuation stands tall in our eyes! For more of Mr. and non-sequiturs which followed from Hurst and his works, please see page 6, his/her cuts and expurgations, but now this issue.-ED. draw attention to two expressions which are frequently used wrongly both in this Some Pretty Vivid journal and elsewhere today. Recollections, Indeed I refer, first, to the incorrect descrip- The Seamen&#39;s Recognition issue of SEA tion: &quot;sail-training&quot; ships, since I doubt HISTORY was perfectly stunning. And it if there is such a one afloat today . The delivered a message that is long overdue. training ships are &quot;school ships, &quot; and I went overseas and back twice in so the leading ones describe themselves World War II in convoys. The first time (e.g. Skoleskib , Navia Escola, Schul- I was on a Rotterdam-South American schi.ffe, etc.) A &quot;sail-training&quot; ship was Line dry cargo freighter with limited a cargo-carrying vessel specially fitted passenger accommodations. Her name for the carriage of a relatively large was Alpharatz, and we sailed from Nornumber of cadets as distinct from appren- folk in August 1943 . Thirty-six days later tices, usually carrying instructors and we landed in Alexandria. As I remember equipped with classrooms. These in- the convoy had something like sixty or cluded the Norddeutscher Lloyd Herzo- seventy ships. The ship being Dutch was gin Sophie Carlotte and Herzogin kept immaculately clean as you can imCecilie; the Devitt &amp; Moore training agine, and the food was excellent. I came home on sick leave in 1944 on ships; the Abraham Rydberg and a a Liberty ship whose name I&#39;ve comnumber of others . A vessel which carries cadets but not pletely forgotten. We got caught in what cargo is a &quot;schoolship .&quot; Soon after I I later found out was the &#39;44 hurricane . joined the Council of the Sai l-Training I knew it was a bad storm, but did not Association in thi s country, I issued a realize it was a hurricane . The ship was memorandum pointing out its misnomer. making very heavy weather of it , and This was agreed in Council, and put to enormous seas were coming aboard. I the Annual General Meeting, where the was looking aft from our accommodamotion bungled . Thus the erroneous title tions in the midship&#39; s island and I rehas stuck to it , but that is no reason for member seeing green water through the port light which looked out over number others to fall into the same error. So the term &quot; tall ships&quot; has also come four and five hatches. When the water into almost universal usage. It is neither cleared, the after cargo mast together a seamanlike one , nor was it used in the with its booms, winches and both Carley days of sail. The late Archie Horka took floats had disappeared . In January I 945 I returned to Europe equal objection to it, to name but one well known to your readers . (That aboard the old Mariposa. We crossed Masefield called for a &quot; tall ship and a without convoy, but escorted at top speed star to steer her by&quot; was probably the from Norfolk to Naples with 2500 men worst thing he ever did , and solely in on board. I was in an inside stateroom the interests of scansion! &quot; Lofty&quot; would on D Deck aft right over the shaft tunnel hardly have fit hi s verse , although cor- and opposite the latrine with seven other men . It took us twenty minutes to get on rect.) We now see small ketches , schooners deck . I often wondered what would have and the like described as &quot; tall ships,&quot; happened had we been torpedoed . After which is quite absurd. Let us have no the war was over I came back on a Vicmore of it in SEA HISTORY , please , on tory ship and landed in Baltimore. pain of being sent to jail or gaol-it I have some pretty vivid recollections makes no odds which, so long as it is of the Atlantic in wartime. It really is incredible that there has never been any rigorous. official notice taken of the merchant serALEX A. HURST Brighton , England vice in World War II. Certainly in England the merchant seaman have received Mr. Hurst should remember that he has full praise. to take on not only that Cape Horn sailorTHOMAS HALE, President man John Masefield in this matter of tall Martha &#39;s Vineyard Shipyard ships, but also William Shakespeare, Vineyard Haven , Massachusetts 5