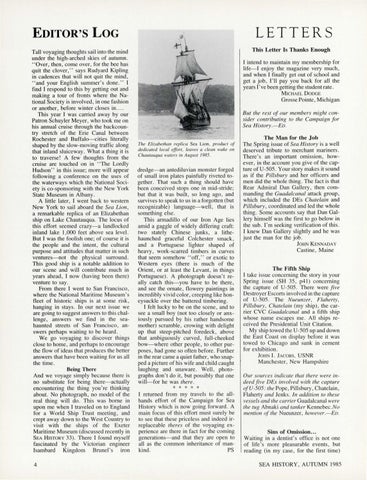 EDITOR&#39;S LOG Tall voyaging thoughts sail into the mind under the high-arched skies of autumn. &quot;Over, then, come over, for the bee has quit the clover, &quot; says Rudyard Kipling in cadences that will not quit the mind , &quot;and your English summer&#39;s done .&quot; I find I respond to this by getting out and making a tour of fronts where the National Society is involved , in one fashion or another, before winter closes in ... . This year I was carried away by our Patron Schuyler Meyer, who took me on his annual cru ise through the backcountry stretch of the Erie Canal between Rochester and Buffalo-&lt;:ities literally shaped by the slow-moving traffic along that inland sluiceway. What a thing it is to traverse! A few thoughts from the cruise are touched on in &quot;The Lordly Hudson &quot; in this issue; more will appear following a conference on the uses of the waterways which the National Society is co-sponsoring with the New York State Museum in Albany . A little later, I went back to western New York to sail aboard the Sea Lion, a remarkable replica of an Elizabethan ship on Lake Chautauqua. The locus of this effort seemed crazy-a landlocked inland lake 1,000 feet above sea level. But I was the foolish one; of course it is the people and the intent, the cultural purpose and attitudes that matter in such ventures- not the physical surround. This good ship is a notable addition to our scene and will contribute much in years ahead, I now (having been there) venture to say. From there I went to San Francisco, where the National Maritime Museum &#39;s fleet of historic ships is at some risk, hanging in stays. In our next issue we are going to suggest answers to this challenge, answers we find in the seahaunted streets of San Francisco, answers perhaps waiting to be heard . We go voyaging to discover things close to home , and perhaps to encourage the flow of ideas that produces the better answers that have been waiting for us all the time. Being There And we voyage simply because there is no substitute for being there- actually encountering the thing you&#39;re thinking about. No photograph, no model of the real thing will do. This was borne in upon me when I traveled on to England for a World Ship Trust meeting, and crept away down to the West Country to visit with the ships of the Exeter Maritime Museum (discussed recently in SEA HISTORY 33). There I found myself fascinated by the Victorian engineer Isambard Kingdom Brunel&#39;s iron

This Letter Is Thanks Enough I intend to maintain my membership for life- I enjoy the magazine very much , and when I finally get out of school and get a job, I&#39;ll pay you back for all the years I&#39;ve been getting the student rate . MICHAEL DODGE Grosse Pointe, Michigan

But the rest of our members might consider contributing to the Campaign for Sea History.-ED. The Elizabethan replica Sea Lion, product of dedicated local effort, leaves a clean wake on Chautauqua waters in August 1985.

dredge-an antediluvian monster forged of small iron plates painfully riveted together. That such a thing should have been conceived stops one in mid-stride; but that it was built, so long ago, and survives to speak to us in a forgotten (but recognizable) language-well , that is something else. This armadillo of our Iron Age lies amid a gaggle of widely differing craft: two stately Chinese junks, a lithehaunched graceful Colchester smack, and a Portuguese lighter shaped of heavy , work-scarred timbers in curves that seem somehow &quot;off,&quot; or exotic to Western eyes (there is much of the Orient, or at least the Levant, in things Portuguese). A photograph doesn&#39;t really catch this-you have to be there , and see the ornate, flowery paintings in incredibly vivid color, creeping like honeysuckle over the battered timbering . I felt lucky to be on the scene, and to see a small boy (not too closely or anxiously pursued by his rather handsome mother) scramble, crowing with delight up that steep-pitched foredeck, above that ambiguously curved, full-cheeked bow-where other people , to other purposes , had gone so often before. Further in the rear came a quiet father, who snapped a picture of his wife and chi ld caught laughing and unaware. Well, photographs don &#39; t do it, but possibly that one will-for he was there .

I returned from my travels to the allhands effort of the Campaign for Sea History which is now going forward. A main focus of this effort must surel y be to see that these priceless and indeed irreplaceable theres of the voyaging experience are there in fact for the coming generations-and that they are open to all as the common inheritance of man~~.

The Man for the Job The Spring issue of Sea History is a well deserved tribute to merchant mariners . There &#39;s an important omission, however, in the account you give of the capture of U-505. Your story makes it sound as if the Pillsbury and her officers and men did the whole thing. The fact is that Rear Admiral Dan Gallery, then commanding the Guadalcanal attack group, which included the DEs Chatelain and Pillsbury, coordinated and led the whole thing. Some accounts say that Dan Gallery himself was the first to go below in the sub. I&#39;m seeking verification of this. I knew Dan Gallery slightly and he was just the man for the job. JOHN KENNADA Y Castine, Maine The Fifth Ship I take issue concerning the story in your Spring issue (SH 35 , p41) concerning the capture of U-505 . There were five Destroyer Escorts involved in the capture of U-505 . The Nueunzer , Flaherty, Pillsbury , Chatelain (my ship), the carrier CVC Guadalcanal and a fifth ship whose name escapes me . All ships received the Presidential Unit Citation. My ship towed the U-505 up and down the East Coast on display before it was towed to Chicago and sunk in cement for exhibition. JOHN I. JACOBS , USNR Manchester, New Hampshire Our sources indicate that there were indeed five DEs involved with the capture of U-505 : the Pope, Pillsbury, Chatelain, Flaherty and Jenks. In addition to these vessels and the carrier Guadalcanal were the tug Abnaki and tanker Kennebec.No mention of the Nueunzer, however.-ED.

Sins of Omission ... Waiting in a dentist&#39;s office is not one of life &#39;s more pleasurable events, but reading (in my case, for the first time) SEA HISTORY, AUTUMN 1985