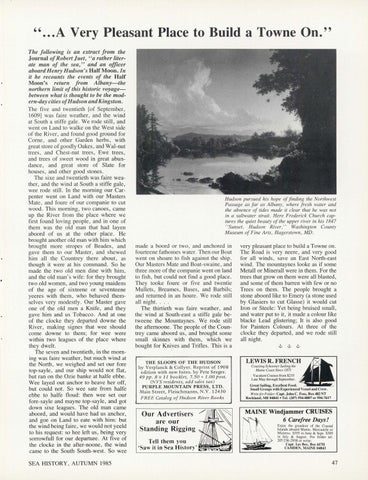 '' ... A Very Pleasant Place to Build a Towne On.'' The following is an extract from the Journal of Robert Juet, "a rather literate man of the sea," and an officer aboard Henry Hudson's Half Moon. In it he recounts the events of the Half Moon's return from Albany-the northern limit of this historic voyagebetween what is thought to be the modern-day cities ofHudson and Kingston. The five and twentieth [of September, 1609] was faire weather, and the wind at South a stiffe gale. We rode still, and went on Land to walke on the West side of the River, and found good ground for Come, and other Garden herbs, with great store of goodly Oakes, and Wal-nut trees, and Chest-nut trees, Ewe trees, and trees of sweet wood in great abundance, and great store of Slate for houses, and other good stones. The sixe and twentieth was faire weather, and the wind at South a stiffe gale, wee rode still. In the morning our Carpenter went on Land with our Masters Mate, and foure of our companie to cut wood. This morning, two canoes, came up the River from the place where we first found loving people, and in one of them was the old man that had layen aboord of us at the other place. He brought another old man with him which brought more stropes of Beades, and gave them to our Master, and shewed him all the Countrey there about, as though it were at his command. So he made the two old men dine with him, and the old man's wife: for they brought two old women, and two young maidens of the age of sixteene or seventeene yeeres with them , who behaved themselves very modestly. Our Master gave one of the old men a Knife, and they gave him and us Tobacco. And at one of the clocke they departed downe the River, making signes that wee should come downe to them; for wee were within two leagues of the place where they dwelt. The seven and twentieth, in the morning was faire weather, but much wind at the North, we weighed and set our fore top-sayle, and our ship would not flat, but ran on the Ozie banke at halfe ebbe. Wee layed out anchor to heave her off, but could not. So wee sate from halfe ebbe to halfe floud : then wee set our fore-sayle and mayne top-sayle , and got down sixe leagues. The old man came aboord, and would have had us anchor, and goe on Land to eate with him : but the wind being faire, we would not yeeld to his request: so hee left us, being very sorrowfull for our departure . At five of the clocke in the after-noone, the wind came to the South South-west. So wee SEA HISTORY, AUTUMN 1985

Hudson pursued his hope of finding the Northwest Passage as far as Albany, where fresh water and the absence of tides made it clear that he was not in a saltwater strait. Here Frederick Church captures the quiet beauty of the upper river in his I 847 "Sunset, Hudson River, " Washington County Museum of Fine Arts, Hagerstown, MD.

made a boord or two , and anchored in fourteene fathomes water. Then our Boat went on shoare to fish against the ship . Our Masters Mate and Boat-swaine, and three more of the companie went on land to fish, but could not find a good place. They tooke foure or five and twentie Mullets, Breames, Bases, and Barbils; and returned in an houre . We rode still all night. ... The thirtieth was faire weather, and the wind at South-east a stiffe gale betweene the Mountaynes. We rode still the afternoone. The people of the Countrey came aboord us, and brought some small skinnes with them , which we bought for Knives and Trifles. This is a THE SLOOPS OF THE HUDSON by Verplanck & Collyer. Reprint of 1908 edition with new Intro. by Pete Seeger. 49 pp. 8 x 11 booklet, 7.50 + 1.00 post. (NYS residents, add sales tax) PURPLE MOUNTAIN PRESS, LTD. Main Street, Fleischmanns, N.Y. 12430 FREE Catalog of Hudson River Books

very pleasant place to build a Towne on. The Road is very neere, and very good for all winds, save an East North-east wind . The mountaynes looke as if some Metall or Minerall were in them. For the trees that grow on them were all blasted, and some of them barren with few or no Trees on them. The people brought a stone aboord like to Emery (a stone used by Glasiers to cut Glasse) it would cut Iron or Steele: Yet being bruised small, and water put to it, it made a colour like blacke Lead glistering; It is also good for Painters Colours. At three of the clocke they departed, and we rode still all night.