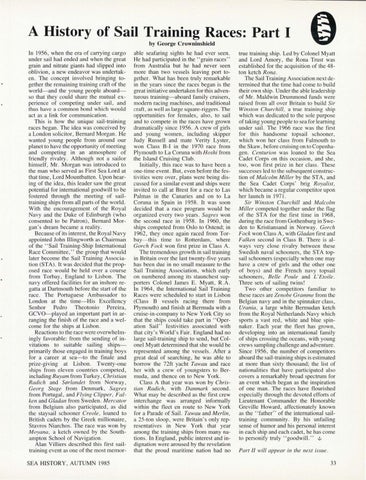 A History of Sail Training Races: Part I by George Crowninshield

In 1956 , when the era of carrying cargo under sail had ended and when the great grain and nitrate giants had slipped into oblivion, a new endeavor was undertaken. The concept involved bringing together the remaining training craft of the world-and the young people aboardso that they could share the mutual experience of competing under sail , and thus have a common bond which would act as a link for communication. This is how the unique sail-training races began. The idea was conceived by a London solicitor, Bernard Morgan. He wanted young people from around our planet to have the opportunity of meeting and competing in an atmosphere of friendly rivalry . Although not a sai lor himself, Mr. Morgan was introduced to the man who served as First Sea Lord at that time , Lord Mountbatten. Upon hearing of the idea , this leader saw the great potential for international goodwill to be fostered through the meeting of sai ltraining ships from all parts of the world. With the encouragement of the Royal Navy and the Duke of Edinburgh (who consented to be Patron) , Bernard Morgan&#39;s dream became a reality . Because of its interest, the Royal Navy appointed John Illingworth as Chairman of the &quot;Sail Training-Ship International Race Committee,&#39;&#39; the group that would later become the Sail Training Association (ST A). It was decided that the proposed race would be held over a course from Torbay , England to Lisbon. The navy offered facilities for an inshore regatta at Dartmouth before the start of the race. The Portuguese Ambassador to London at the time-His Excellency Senhor Pedro Theotonio Pereira, GCVO-played an important part in arranging the finish of the race and a welcome for the ships at Lisbon . Reactions to the race were overwhelmingly favorable: from the sending of invitations to suitable sailing ships primarily those engaged in training boys for a career at sea-to the finale and prize-giving at Lisbon. Twenty-one ships from eleven countries competed, including Ruyam from Turkey , Christian Radich and SÂ˘rlandet from Norway , Georg Stage from Denmark , Sagres from Portugal, and Flying Clipper, Falken and Gladan from Sweden. Mercator from Belgium also participated , as did the staysail schooner Creole, loaned to British cadets by the Greek millionai re , Stavros Niarchos . The race was won by Moyana, a ketch owned by the Southampton School of Navigation . Alan Villiers described this first sai ltraining event as one of the most memorSEA HISTORY, AUTUMN 1985

able seafaring sights he had ever seen . He had participated in the &quot;grain races&quot; from Australia but he had never seen more than two vessels leaving port together. What has been truly remarkable in the years since the races began is the great initiative undertaken for this adventurous training-aboard family cruisers, modern racing machines , and traditional craft, as well as large square-riggers . The opportunities for females , also, to sail and to compete in the races have grown dramatically since 1956. A crew of girls and young women, including skipper Judy Russell and mate Verity Lyster, won Class B-I in the 1970 race from Plymouth to La Coruna with Hoshi from the Island Cruising Club. Initially, this race was to have been a one-time event. But, even before the festivities were over , plans were being discussed for a similar event and ships were invited to call at Brest for a race to Las Palmas in the Canaries and on to La Coruna in Spain in 1958. It was soon decided that a race program would be organized every two years. Sagres won the second race in 1958 . In 1960 , the ships competed from Oslo to Ostend; in 1962, they once again raced from Torbay- this time to Rotterdam , where Gorch Fock won first prize in Class A. The tremendous growth in sail training in Britain over the last twenty-five years has been due in no small measure to the Sail Training Association, which early on numbered among its staunchest supporters Colonel James E. Myatt, R .A. In 1964, the International Sail Training Races were scheduled to start in Lisbon (Class B vessels racing there from Plymouth) and finish at Bermuda with a cruise-in-company to New York City so that the ships could take part in &quot; Operation Sail &quot; festivities associated with that city&#39;s World &#39;s Fair. England had no large sail-training ship to send , but Colonel Myatt determined that she would be represented among the vessels. After a great deal of searching, he was able to borrow the 72ft yacht Tawau and race her with a crew of youngsters to Bermuda , and thence on to New York . Class A that year was won by Christian Radich, with Danmark second. What may be described as the first crew interchange was arranged informally within the fleet en route to New York for a Parade of Sail. Tawau and Merlin , a 25-ton sloop , were Britain &#39;s only representatives in New York that year among the training ships from many nations. In England, public interest and indignation were aroused by the revelation that the proud maritime nation had no

true training ship. Led by Colonel Myatt and Lord Amory, the Rona Trust was established for the acquisition of the 48ton ketch Rona . The Sail Training Association next determined that the time had come to build their own ship. Under the able leadersh ip of Mr. Maldwin Drummond funds were raised from all over Britain to build Sir Winston Churchill, a true training ship which was dedicated to the sole purpose of taking young people to sea for learning under sai l. The 1966 race was the first for this handsome topsail schooner, which won her class from Falmouth to the Skaw, before cruising on to Copenhagen. Centurion was loaned to the Sea Cadet Corps on this occasion, and she , too, won first prize in her class. These successes led to the subsequent construction of Malcolm Miller by the STA , and the Sea Cadet Corps&#39; brig Royalist, which became a regular competitor upon her launch in 197 I . Sir Winston Churchill and Malcolm Miller competed together under the flag of the ST A for the first time in 1968 , during the race from Gothenburg in Sweden to Kristiansand in Norway . Gorch Fock won Class A , with Gladan first and Falken second in Class B. There is always very close rivalry between these Swedish naval schooners , the ST A topsail schooners (especially when one may have a crew of girls and the other one of boys) and the French navy topsail schooners, Belle Poule and L&#39; Etoile . Three sets of sailing twins! Two other competitors familiar to these races are Zenobe Gramme from the Belgian navy and in the spinnaker class, Urania, a large white Bermudan ketch from the Royal Netherlands Navy which sports a vast red , white and blue spinnaker. Each year the fleet has grown, developing into an international family of ships crossing the oceans , with young crews sampling challenge and adventure. Since 1956, the number of competitors aboard the sail-training ships is estimated at more than sixty thousand ; the list of nationalities that have participated also covers a remarkably broad spectrum for an event which began as the inspiration of one man . The races have flourished especially through the devoted efforts of Lieutenant Commander the Honorable Greville Howard, affectionately known as the &quot; father&quot; of the international sailtraining community . By his unfailing sense of humor and his personal interest in each ship and each cadet, he has come to personify truly &quot;goodwill. &quot; ..t

Part II will appear in the next issue.