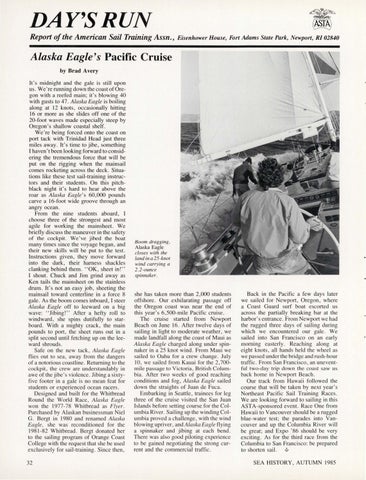 Alaska Eagle&#39;s Pacific Cruise by Brad Avery It &#39;s midnight and the gale is still upon us. We&#39; re running down the coast of Oregon with a reefed main ; it&#39; s blowing 40 with gusts to 47. Alaska Eagle is boiling along at 12 knots, occasionally hitting 16 or more as she slides off one of the 20-foot waves made especially steep by Oregon&#39;s shallow coastal shelf. We &#39; re being forced onto the coast on port tack with Trinidad Head just three miles away. It&#39;s time to jibe, something I haven &#39;t been looking forward to consideri ng the tremendous force that will be put on the rigging when the mainsail comes rocketing across the deck . Situations like these test sai l-training instructors and their students. On this pitchblack night it &#39;s hard to hear above the roar as Alaska Eagle&#39;s 60 ,000 pounds carve a 16-foot wide groove through an angry ocean. From the nine students aboard, I choose three of the strongest and most agi le for working the mainsheet. We briefly di scuss the maneuver in the safety of the cockpit. We &#39;ve jibed the boat many times since the voyage began, and their new skill s will be put to the test. Instructions given, they move forward into the dark , their harness shackles clanking behind them . &quot; OK , sheet in! &quot; I shout. Chuck and Jim grind away as Ken tail s the mainsheet on the stainless drum. It&#39;s not an easy job , sheeting the mainsail toward centerline in a force 8 gale. As the boom comes inboard, I steer Alaska Eagle off to leeward on a big wave: &quot; Jibing! &quot; After a hefty roll to windward, she spins dutifull y to starboard. With a mighty crack, the main pounds to port, the sheet runs out in a split second until fetching up on the leeward shrouds. Safe on the new tack, Alaska Eagle flies out to sea , away from the dangers of a notorious coastline. Returning to the cockpit, the crew are understandably in awe of the jibe&#39;s violence. Jibing a sixtyfi ve footer in a gale is no mean feat for students or experienced ocean racers. Designed and built for the Whitbread Round the World Race , Alaska Eagle won the 1977-78 Whitbread as Flyer. Purchased by Alaskan businessman Niel G . Bergt in 1980 and renamed Alaska Eagle, she was reconditioned for the 198 1-82 Whitbread. Bergt donated her to the sailing program of Orange Coast College with the request that she be used exclusively for sail-training. Since then ,

Alaska Eagle closes with the land in a 25-knot wind carrying a 2.2-ounce spinnaker.

she has taken more than 2,000 students offshore. Our exhilarating passage off the Oregon coast was near the end of this year&#39;s 6,500-m ile Pacific cruise. The crui se started from Newport Beach on June 16 . After twel ve days of sailing in light to moderate weather, we made landfall along the coast of Maui as Alaska Eagle charged along under spinnaker in a 25 knot wi nd . From Maui we sailed to Oahu for a crew change. Jul y 10, we sai led from Kauai fo r the 2 ,700mile passage to Victoria, British Columbia. After two weeks of good reaching conditions and fog , Alaska Eagle sailed down the straights of Juan de Fuca. Embarking in Seattle, trainees for leg three of the crui se visited the San Juan Islands before setti ng course. for the Columbia River. Sailing up the wi nding Columbia proved a challenge, with the wi nd blowing upri ver, and Alaska Eagle flying a spinnaker and jibing at each bend . There was also good piloting experience to be gained negotiating the strong current and the commercial traffic .

Back in the Pacific a few days later we sailed fo r Newport, Oregon, where a Coast Guard surf boat escorted us across the partiall y breaking bar at the harbor&#39; s entrance. From Newport we had the rugged three days of sailing during which we encountered our gale. We sailed into San Francisco on an early morning easterly . Reaching along at eight knots , all hands held the wheel as we passed under the bridge and rush-hour traffic. From San Francisco, an uneventful two-day trip down the coast saw us back home in Newport Beach. Our track from Hawaii followed the course that will be taken by nexc year &#39;s Northeast Pacific Sail Training Races. We are looking forward to sailing in thi s AST A-sponsored event . Race One from Hawai i to Vancouver should be a ru gged blue-water test ; the parades into Vancouver and up the Columbia River will be great; and Expo &#39; 86 should be very exciting . As for the third race from the Columbia to San Francisco: be prepared to shorten sail. w SEA HISTORY , AUTUMN 1985