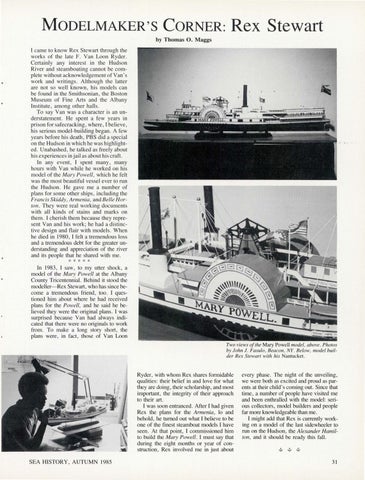 by Thomas 0. Maggs I came to know Rex Stewart through the works of the late F. Van Loon Ryder. Certainly any interest in the Hudson River and steamboating cannot be complete without acknowledgement of Van's work and writings. Although the latter are not so well known, his models can be found in the Smithsonian, the Boston Museum of Fine Arts and the Albany Institute , among other hall s. To say Van was a character is an understatement. He spent a few years in prison for safecracking, where , I believe , his serious model-building began. A few years before his death , PBS did a special on the Hudson in which he was highlighted . Unabashed, he talked as freely about his experiences in jail as about his craft. In any event, I spent many , many hours with Van while he worked on his model of the Mary Powell , which he felt was the most beautiful vessel ever to run the Hudson. He gave me a number of plans for some other ships, including the Francis Skiddy, Armenia, and Belle Horton. They were real working documents with all kinds of stains and marks on them . I cherish them because they represent Van and his work; he had a distinctive design and flair with models. When he died in 1980, I felt a tremendous loss and a tremendous debt for the greater understanding and appreciation of the river and its people that he shared with me .

In 1983, I saw, to my utter shock , a model of the Mary Powell at the Albany County Tricentennial. Behind it stood the modeller- Rex Stewart, who has since become a tremendous friend, too . I questioned him about where he had received plans for the Powell, and he said he believed they were the original plans. I was surprised because Van had always indicated that there were no originals to work from. To make a long story short, the plans were , in fact , those of Van Loon Two views of the Mary Powell model, above . Photos by John J. Fasulo , Beacon, NY . Below, model builder Rex Stewart with his Nantucket.

Ryder, with whom Rex shares formidable qualities: their belief in and love for what they are doing, their scholarship , and most important, the integrity of their approach to their art. I was soon entranced . After I had given Rex the plans for the Armenia, lo and behold, he turned out what I believe to be one of the finest steamboat models I have seen . At that point, I commissioned him to build the Mary Powell. I must say that during the eight months or year of construction , Rex involved me in just about SEA HISTORY, AUTUMN 1985

every phase. The night of the unveiling, we were both as excited and proud as parents at their child's coming out. Since that time, a number of people have visited me and been enthralled with the model: serious collectors, model builders and people far more knowledgeable than me. I might add that Rex is currently working on a model of the last sidewheeler to run on the Hudson, the Alexander Hamilton, and it should be ready this fall.