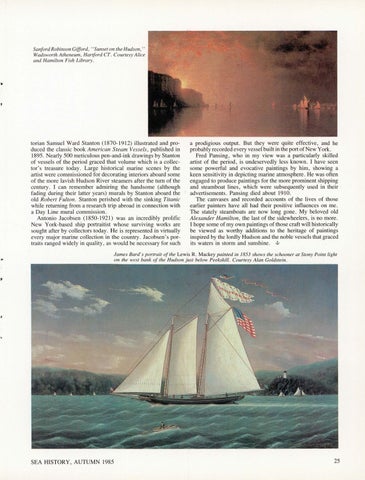 torian Samuel Ward Stanton (1870-1912) illustrated and produced the classic book American Steam Vessels , published in 1895. Nearly 500 meticulous pen-and-ink drawings by Stanton of vessels of the period graced that volume which is a collector&#39; s treasure today . Large historical marine scenes by the artist were commissioned for decorating interiors aboard some of the more lavish Hudson River steamers after the tum of the century . I can remember admiring the handsome (although fading during their latter years) murals by Stanton aboard the old Robert Fulton. Stanton perished with the sinking Titanic while returning from a research trip abroad in connection with a Day Line mural commission. Antonio Jacobsen ( 1850-1921) was an incredibly prolific New York-based ship portraitist whose surviving works are sought after by collectors today . He is represented in virtually every major marine collection in the country . Jacobsen &#39; s portraits ranged widely in quality, as would be necessary for such

a prodigious output. But they were quite effective, and he probably recorded every vessel built in the port of New York . Fred Pansing , who in my view was a particularly skilled artist of the period , is undeservedly less known . I have seen some powerful and evocative paintings by him, showing a keen sensitivity in depicting marine atmosphere. He was often engaged to produce paintings for the more prominent shipping and steamboat lines, which were subsequently used in their Âˇ advertisements. Pansing died about 1910. The canvases and recorded accounts of the lives of those earlier painters have all had their positive influences on me. The stately steamboats are now long gone . My beloved old Alexander Hamilton, the last of the sidewheelers, is no more . I hope some of my own paintings of those craft will historically be viewed as worthy additions to the heritage of paintings inspired by the lordly Hudson and the noble vessels that graced its waters in storm and sunshine. w

James Bard&#39;s portrait of the Lewis R. Mackey painted in 1853 shows the schooner at Stony Point light on the west bank of the Hudson just below Peekskill. Courtesy Alan Goldstein.