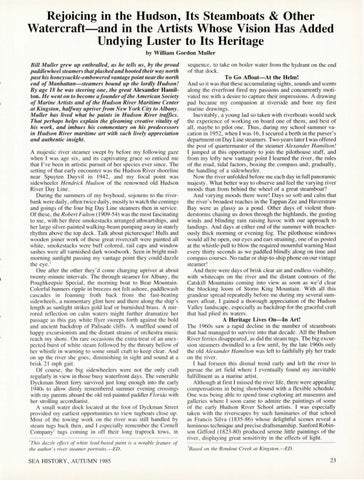 Rejoicing in the Hudson, Its Steamboats &amp; Other Watercraft-and in the Artists Whose Vision Has Added Undying Luster to Its Heritage by William Gordon Muller

Bill Muller grew up enthralled, as he tells us, by the proud paddle wheel steamers that plashed and hooted their way north past his honeysuckle-embowered vantage point near the north end of Manhattan-steamers bound up the Lordly Hudson! By age 18 he was steering one, the great Alexander Hamilton. He went on to become a founder of the American Society of Marine Artists and of the Hudson River Maritime Center at Kingston, halfway upriver from New York City to Albany. Muller has Lived what he paints in Hudson River traffics. That perhaps helps explain the gleaming creative vitality of his work, and imbues his commentary on his predecessors in Hudson River maritime art with such Lively appreciation and authentic insight. A majestic river steamer swept by before my fo llowing gaze when I was age six, and its captivating grace so enticed me that I &#39; ve been in artistic pursuit of her species ever since. The setting of that early encounter was the Hudson Ri ver shoreline near Spuyten Duyvil in 1942 , and my focal point was sidewheeler Hendrick Hudson of the renowned old Hudson River Day Line . During the summers of my boyhood , sojourn s to the riverbank were dai ly, often twice daily , mostly to watch the comings and goings of the four big Day Line steamers then in service. Of these , the Robert Fulton ( 1909-54) was the most fascinating to me , with her three smokestacks arranged athwartships , and her large silver-painted walking-beam pumping away in stately rhythm above the top deck. Talk about picturesq ue! Hull s and wooden joiner work of these great rivercraft were painted all white , smokestacks were buff colored , rail caps and window sashes were all varnished dark woodwork. Seen in bright midmorning sunli ght passing my va ntage point they could dazzle the eye.&#39; One after the other they&#39; d come charging upriver at abou t twenty- minute intervals. The through steamer for Albany, the Poughkeepsie Special , the morning boat to Bear Mountain. Colorful banners ripple in breezes not fe lt ashore, paddlewash cascades in foaming froth back from the fast-beating sidewheels, a momentary glint here and there along the ship &#39; s length as sunlight strikes gold leaf or burni shed brass . A mirrored reflection on calm waters might furth er dramati ze her passage as this gay white flyer sweeps forth against the bold and ancient backdrop of Palisade cliffs. A muffled sound of happy excursioni sts and the distant strains of orchestra music reach my shore. On rare occasions the extra treat of an unexpected burst of white steam followed by the throaty bellow of her whistle in warning to some small craft to keep clear. And on up the river she goes , diminishing in sight and sound at a brisk 2 1 mph ga it. Of course, the big sidewheelers were not the only craft regularly in view in those busy waterfront days. The venerable Dyckman Street ferry survi ved just long enough into the early 1940s to allow dimly remembered summer evening crossings with my parents aboard the old red-painted paddler Florida with her strolling accordianist. A small water dock located at the foot of Dyckman Street provided my earliest opportu nities to view tugboats close up. Most of the towing work on the river was still handled by steam tugs back then , and 1 especially remember the Cornell Company&#39; tugs coming in off their long traprock tows , in &#39;This dazzle effect of white lead-based paint is a notable f eature of the author&#39;s river steamer portraits.-ED .

sequence , to take on boiler water from the hydrant on the end of that dock .

To Go Afloat-At the Helm! And so it was that these accumulating sights, sounds and scents along the riverfront fired my passions and concurrently motivated me with a desire to capture their impressions. A drawing pad became my companion at riverside and bore my first marine draw ings. Inevitabl y, a young lad so taken with riverboats wou ld seek the experience of working on board one of them , and best of all , maybe to pilot one. Thus, durin g my school summer vacation in 1952 , when I was 16, I secured a berth in the purser&#39;s department on Day Line steamers . Two years later I was offered the post of quartermaster of the steamer Alexander Hamilton! I jumped at this opportunity to join the pilothouse staff, and from my lofty new vantage point I learned the river, the rules of the road , tidal factors, boxing the compass and, gradually, the handling of a sidewheeler. Now the river unfolded before me each day in full panoramic majesty . What better way to observe and feel the varying river moods than from behind the wheel of a great steamboat? And varying moods there were! Days so soft and calm that the river&#39; s broadest reaches in the Tappan Zee and Haverstraw Bay were as glassy as a pond . Other days of violent thunderstorn1s chasing us down through the highlands , the gusting winds and blinding ra in ra ising havoc with our approach to landings. And days at e ither end of the summer with treacherously thick morning or evening fog. The pilothouse windows would all be open, our eyes and ears straining , one of us posted at the whistle-pull to blow the required mournful warning blast every thirty seconds as we paddled blindly along on time and compass courses. No radar or ship-to-ship phone on our vintage steamer! And there were days of bri sk clear air and endless visibility , with whitecaps on the river and the distant contours of the Catskill Mountains coming into view as soon as we &#39; d clear the blocki ng loom of Storm King Mountain. With all thi s grandeur spread repeatedl y before me during my several summers afloat , I gained a thorough appreciation of the Hudson Valley landscape , especially as backdrop for the gracefu l craft that had plied its waters.

A Heritage Lives On-In Art! The 1960s saw a rapid decline in the number of steamboats that had managed to survive into that decade. All the Hudson Ri ver ferries disappeared , as did the steam tugs. The big excursion steamers dwindled to a few until , by the late 1960s on ly the old Alexander Hamilton was left to faithfu ll y ply her trade on the river. I had forseen this dismal trend early and left the river to pursue the art field where I eventuall y found my inevitab le fulfillment as a marine artist. Although at first I mi ssed the river life , there were appealing compensations in being shorebound with a flexible schedu le . One was being able to spend time exploring art museums and galleries where I soon came to ad mire the paintings of some of the early Hudson Ri ver School artists. I was especially taken with the riverscapes by such luminaries of that school as Francis Si lva ( 1835-86) whose delightful scenes reveal a luminous technique and prec ise draftsmanship . Sanford Robinson Gifford (1823-80) produced serene little paintings of the river, di splaying great sensiti vi ty in the effects of light. &#39;Based on the Rondout Creek at Kingston .- ED.