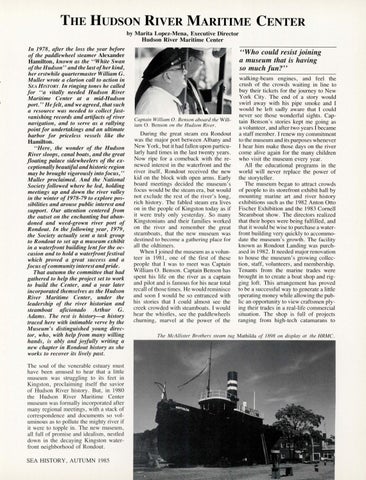 Hudson River Maritime Center In 1978, after the loss the year before of the paddlewheel steamer Alexander Hamilton, known as the &quot;White Swan of the Hudson &quot; and the last of her kind, her erstwhile quartermaster William G. Muller wrote a clarion call to action in SEA HISTORY. In ringing tones he called for &quot; a vitally needed Hudson River Maritime Center at a mid-Hudson port. &quot; He felt, and we agreed, that such a resource was needed to collect fastvanishing records and artifacts of river navigation, and to serve as a rallying point for undertakings and an ultimate harbor for priceless vessels like the Hamilton. &quot; Here , the wonder of the Hudson River sloops, canal boats, and the great floating palace sidewheelers of the exceptionally beautiful and historic region may be brought vigorously into focus, &quot; Muller proclaimed. And the National Society followed where he led, holding meetings up and down the river valley in the winter of 1978-79 to explore possibilities and arouse public interest and support. Our attention centered from the outset on the enchanting but abandoned and weed-grown river port of Rondout. In the following year, 1979, the Society actually sent a task group to Rondout to set up a museum exhibit in a waterfront building lent for the occasion and to hold a waterfront festival which proved a great success and a focus ofcommunity interest and pride. That autumn the committee that had gathered to help the project set to work to build the Center, and a year later incorporated themselves as the Hudson River Maritime Center, under the leadership of the river historian and steamboat aficionado Arthur G. Adams. The rest is history--a history traced here with intimable verve by the Museum&#39;s distinguished young director, who, with help from many willing hands, is ably and joyfully writing a new chapter in Rondout history as she works to recover its lively past. The soul of the venerable estuary must have been amused to hear that a little museum was struggling to its feet in Kingston , proclaiming itself the savior of Hudson River history. But , in 1980 the Hudson River Maritime Center museum was formally incorporated after many regional meetings, with a stack of correspondence and documents so voluminous as to pollute the mighty river if it were to topple in. The new museum , all full of promise and idealism, nestled down in the decaying Kingston waterfront neighborhood of Rondout. SEA HISTORY , AUTUMN 1985

&quot;Who could resist joining a museum that is having so much fun?&quot;

During the great steam era Rondout was the major port between Albany and New York, but it had fallen upon particularly hard times in the last twenty years. Now ripe for a comeback with the renewed interest in the waterfront and the river itself, Rondout received the new kid on the block with open arms. Early board meetings decided the museum &#39;s focus would be the steam era, but would not excl ude the rest of the river&#39;s long, rich history. The fabled steam era lives on in the people of Kingston today as if it were trul y only yesterday. So many Kingstonians and their families worked on the river and remember the great steamboats, that the new museum was destined to become a gathering place for all the oldtimers. When I joined the museum as a volunteer in 1981 , one of the first of these people that I was to meet was Captain William 0. Benson. Captain Benson has spent hi s life on the river as a captain and pilot and is famous for his near total recall of those times. He would reminisce and soon I would be so entranced with his stories that I could almost see the creek crowded with steamboats. I would hear the whistles, see the paddlewheels churning, marvel at the power of the

walking-beam engines, and feel the crush of the crowds waiting in line to buy their tickets for the journey to New York City. The end of a story would swirl away with his pipe smoke and I would be left sadly aware that I could never see those wonderful sights. Captain Benson&#39; s stories kept me going as a volunteer, and after two years I became a staff member. I renew my commitment to the museum and its purposes whenever I hear him make those days on the river come alive again for the many children who visit the museum every year. All the educational programs in the world will never replace the power of the storyteller. The museum began to attract crowds of people to its storefront exhibit hall by mounting marine art and river history exhibitions such as the 1982 Anton Otto Fischer Exhibition and the 1983 Cornell Steamboat show. The directors realized that their hopes were being fulfilled , and that it would be wise to purchase a waterfront building very quickly to accommodate the museum &#39; s growth. The facility known as Rondout Landing was purchased in 1982. It needed major renovation to house the museum&#39; s growing collection, staff, volunteers, and membership . Tenants from the marine trades were brought in to create a boat shop and rigging loft. This arrangement has proved to be a successful way to generate a little operating money while allowing the public an opportunity to view craftsmen plying their trades in a real-life commercial situation . The shop is full of projects ranging from high-tech catamarans to

The McAllister Brothers steam tug Mathilda of 1898 on display at the HRMC.