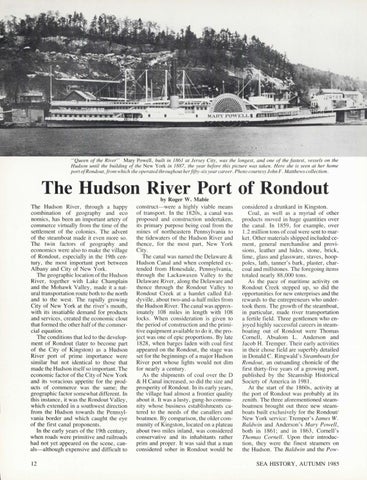 &#39;&#39; Queen of the River&#39;&#39; Mary Powe ll, built in 1861 at Jersey City, was the longest, and one of the fastest , vessels on the Hudson until the building of the New York in 1887, the year before this picture was taken . Here she is seen at her home port of Rondout .from which she operated throughout her fifty- six year career. Photo courtesy John F. Matthews collection.

The Hudson River Port of Rondout Th.e Hudson River, through a happy combination of geography and eco nomics, has been an important artery of commerce virtually from the time of the settlement of the colonies. The advent of the steamboat made it even more so. The twin factors of geography and economics were also to make the village of Rondout, especially in the 19th century, the most important port between Albany and City of New York . The geographic location of the Hudson River, together with Lake Champlain and the Mohawk Valley , made it a natural transportation route both to the north and to the west. The rapidly growing City of New York at the river&#39;s mouth, with its insatiable demand for products and services , created the economic clout that formed the other.half of the commercial equation. The conditions that led to the development of Rondout (later to become part of the City of Kingston) as a Hudson River port of prime importance were similar but not identical to those that made the Hudson itself so important. The economic factor of the City of New York and its voracious appetite for the products of commerce was the same; the geographic factor somewhat different. In this instance, it was the Rondout Valley, which extended in a southwest direction from the Hudson towards the Pennsylvania border and which caught the eye of the first canal proponents. In the early years of the 19th century, when roads were primitive and railroads had not yet appeared on the scene, canals-although expensive and difficult to 12

by Roger W. Mabie construct-were a highly viable means of transport . In the 1820s , a canal was proposed and construction undertaken , its primary purpose being coal from the mines of northeastern Pennsylvania to the tidewaters of the Hudson River and thence , for the most part , New York City . The canal was named the Delaware &amp; Hudson Canal and when completed extended from Honesdale, Pennsylvania, through the Lackawaxen Valley to the Delaware River , along the Delaware and thence through the Rondout Valley to Rondout Creek at a hamlet called Eddyville, about two-and-a-half miles from the Hudson River. The canal was approximately 108 miles in length with 108 locks. When consideration is given to the period of construction and the primitive equipment available to do it , the project was one of epic proportions. By late 1828, when barges laden with coal first appeared on the Rondout, the stage was set for the beginnings of a major Hudson River port whose lights would not dim for nearly a century. As the shipments of coal over the D &amp; H Canal increased , so did the size and prosperity of Rondout. In its early years, the village had almost a frontier quality about it. It was a lusty, gung-ho community whose business establishments catered to the needs of the canallers and boatmen. By comparison , the older community of Kingston , located on a plateau about two miles inland, was considered conservative and its inhabitants rather prim and proper. It was said that a man considered sober in Rondout would be

considered a drunkard in Kingston. Coal , as well as a myriad of other products moved in huge quantities over the canal. In 1859 , for example, over 1.2 million tons of coal were sent to market. Other materials shipped included cement , general merchandise and provisions, leather and hides, stone, brick, lime , g lass and glassware , staves , hooppoles, lath, tanner&#39;s bark, plaster, charcoal and millstones. The foregoing items totaled nearly 88,000 tons. As the pace of maritime activity on Rondout Creek stepped up, so did the opportunities for new enterprises and the rewards to the entrepreneurs who undertook them. The growth of the steamboat, in particular, made river transportation a fertile field. Three gentlemen who enjoyed highly successful careers in steamboating out of Rondout were Thomas Cornell , Absalom L. Anderson and Jacob H. Tremper. Their early activities in their chose field are superbly detailed in Donald C. Ringwald &#39; s Steamboats for Rondout, an outsanding chonicle of the first thirty-five years of a growing port , published by the Steamship Historical Society of America in 1981. At the start of the 1860s, activity at the port of Rondout was probably at its zenith. The three aforementioned steamboatmen brought out three new steamboats built exclusively for the Rondout/ New York service: Tremper&#39; s James W. Baldwin and Anderson &#39; s Mary Powell, both in 1861; and in 1863, Cornell&#39;s Thomas Cornell. Upon their introduction , they were the finest steamers on the Hudson. The Baldwin and the PowSEA HISTORY , AUTUMN 1985