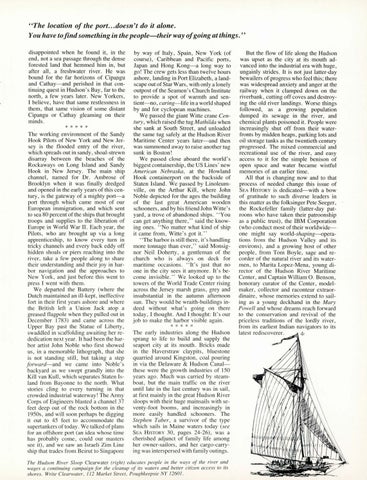 &quot;The location of the port ... doesn&#39;t do it alone. You have to find something in the people-their way ofgoing at things.&#39;&#39; disappointed when he found it , in the end, not a sea passage through the dense forested land that hemmed him in , but after all , a freshwater river. He was bound for the far horizons of CipaJJgu and Cathay-and perished in that continuing quest in Hudson&#39;s Bay, far to the north, a few years later. New Yorkers , I believe, have that same restlessness in them , that same vision of some distant Cipangu or Cathay gleaming on their minds.

The working environment of the Sandy Hook Pilots of New York and New Jersey is the flooded entry of the river , which spreads out in sandy, shoal-strewn disarray between the beaches of the Rockaways on Long Island and Sandy Hook in New Jersey. The main ship channel, named for Dr. Ambrose of Brookl yn when it was fin ally dredged and opened in the early years of this century , is the gateway of a mighty port-a port through which came most of our European immigration, and which sent to sea 80 percent of the ships that brought troops and supplies to the liberation of Europe in World War II. Each year, the Pilots, who are brought up via a long apprenticeship , to know every tum in tricky channels and every back eddy off hidden shoals or piers reaching into the river, take a few people along to share their understanding and their joy in harbor navigation and the approaches to New York , and just before thi s went to press I went with them. We departed the Battery (where the Dutch maintained an ill-kept, ineffective fort in their first years ashore and where the British left a Union Jack atop a greased flagpole when they pulled out in December 1783) and came across the Upper Bay past the Statue of Liberty , swaddled in scaffolding awaiting her rededication next year. It had been the harbor artist John Noble who first showed us , in a memorable lithograph, that she is not standing still , but taki ng a step forward-and we came into Noble&#39;s backyard as we swept grandl y into the Kill van Kull , which separates Staten Island from Bayonne to the north. What stories cling to every turning in that crowded industrial waterway! The Army Corps of Engineers bl asted a channel 37 feet deep out of the rock bottom in the 1950s , and will soon perhaps be digging it out to 45 feet to accommodate the supertankers of today. We talked of plans for an offshore port (an idea whose time has probably come, could our masters see it), and we saw an Israeli Zim Line ship that trades fro m Beirut to Singapore

by way of Italy , Spain, New York (of course), Âˇ Caribbean and Pacific ports, Japan and Hong Kong-a long way to go! The crew gets less than twelve hours ashore, landing in Port Elizabeth , a landscape out of Star Wars, with only a lonely outpost of the Seamen &#39;s Church Institute to provide a spot of warmth and sentient- no , caring-li fe in a world shaped by and for cyclopean machines. We passed the giant Witte crane Century, which raised the tug Mathilda when she sank at South Street, and unloaded the same tug safely at the Hudson Ri ver Maritime Center years later-and then was summoned away to raise another tug sunk in Boston! We passed close aboard the world&#39;s biggest containership, the US Lines&#39; new American Nebraska, at the Howland Hook containerport on the backside of Staten Island. We passed by Linoleumville, on the Arthur Kill , where John Noble depicted for the ages the building of the last great American wooden schooners, and by his friend John Witte&#39;s yard, a trove of abandoned ships. &quot; You can get anything there ,&quot; said the knowing ones. &quot; No matter what kind of ship it came from , Witte &#39;s got it. &quot; &quot;The harbor is still there , it&#39;s handling more tonnage than ever,&quot; said Monsignor Neil Doherty, a gentleman of the church who is always on deck for maritime occasions. &quot; It&#39;s just that no one in the city sees it anymore . It &#39; s become invisible.&quot; We looked up to the towers of the World Trade Center rising across the Jersey marsh grass, grey and insubstanti al in the autumn afternoon sun . They would be wraith-buildings indeed without what&#39;s going on there today , I thought. And I .thought: It&#39;s our job to make the harbor visible again .

The earl y industries along the Hudson sprang to life to build and supply the seaport city at its mouth . Bricks made in the Haverstraw claypits, bluestone quarried around Kingston , coal pouring in via the Delaware &amp; Hudson Canalthese were the growth industries of 150 years ago . Much was carried by steamboat, but the main traffic on the river until late in the last century was in sail , at first mainly in the great Hudson Ri ver sloops with their huge mai nsails with seventy-foot booms , and increasingly in more easi ly handled schooners. The Stephen Taber , a survivor of the type which sails in Maine waters today (see SEA HISTORY 30, pages 24-26), was a cherished adjunct of fam ily life among her owner-sailors, and her cargo-carrying was interspersed with family outings.

Th e Hudson River Sloop Clearwater (right) educates people in the ways of the river and wages a continuing campaign for the cleanup of its waters and better citizen access to its shores. Write Clearwater, 11 2 Market Street, Poughkeepsie NY 12601.

But the flow of life along the Hudson was upset as the city at its mouth advanced into the industrial era with huge , ungainly strides. It is not just latter-day bewailers of progress who feel this; there was widespread anxiety and anger at the railway when it clamped down on the riverbank, cutting off coves and destroying the old river landings. Worse things followed, as a growing population dumped its sewage in the river, and chemical plants poisoned it. People were increasingly shut off from their waterfronts by midden heaps , parking lots and oil storage tanks as the twentieth century progressed. The mixed commercial and recreational use of the river , and easy access to it for the simple benison of open space and water became wistful memories of an earlier time . All that is changing now and to that process of needed change this issue of SEA HISTORY is dedicated-with a bow of gratitude to such diverse leaders in this matter as the folksinger Pete Seeger, the Rockefeller family (latter-day patroons who have taken their patroonship as a public trust) , the IBM Corporation (who conduct most of their worldwideone might say world-shaping---operations from the Hudson Valley and its environs), and a growing host of other people , from Tom Boyle, sage and recorder of the natural river and its watermen , to Marita Lopez-Mena, young director of the Hudson River Maritime Center, and Captain William 0 . Benson , honorary curator of the Center, modelmaker, collector and raconteur extraordinaire , whose memories extend to sailing as a young deckhand in the Mary Powell and whose dreams reach forward to the conservation and revival of the priceless traditions of the lordly river, from its earliest Indian navigators to its latest rediscoverer. ..v