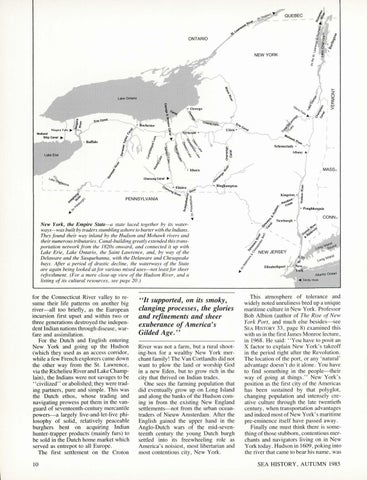 New York, the Empire State-a state laced together by its waterways-was built by traders stumbling ashore to barter with the Indians. They found their way inland by the Hudson and Mohawk rivers and their numerous tributaries. Canal-building greatly extended this transportation network from the 1820s onward, and connected it up with Lake Erie, Lake Ontario, the Saint Lawrence, and, by way of the Delaware and the Susquehanna, with the Delaware and Chesapeake bays. After a period of drastic decline, the waterways of the State are again being looked at for various mixed uses- not least for sheer refreshment . (For a more close-up view of the Hudson River, and a listing of its cultural resources, see page 20.)

for the Connecticut River valley to resume their life patterns on another big river-all too briefly, as the European incursion first upset and within two or three generations destroyed the independent Indian nations through disease, warfare and assimilation . For the Dutch and English entering New York and going up the Hudson (which they used as an access corridor, while a few French explorers came down the other way from the St. Lawrence, via the Richelieu River and Lake Champlain), the Indians were not savages to be &quot;civilized&quot; or abolished; they were trading partners, pure and simple. This was the Dutch ethos, whose trading and navigating prowess put them in the vanguard of seventeenth-ceritury mercantile powers-a largely live-and-let-live philosophy of solid, relatively peaceable burghers bent on acquiring Indian hunter-trapper products (mainly furs) to be sold in the Dutch home market which served as entrepot to all Europe. The first settl&#39;ement on the Croton

&quot;It supported, on its smoky,

clanging processes, the glories and refinements and sheer exuberance of America&#39;s Gilded Age. &#39;&#39; River was not a farm , but a rural shooting-box for a wealthy New York merchant family! The Van Cortlandts did not want to plow the land or worship God in a new Eden , but to grow rich in the city that thrived on Indian trades. One sees the farming population that did eventually grow up on Long Island and along the banks of the Hudson coming in from the existing New England settlements-not from the urban oceantraders of Nieuw Amsterdam . After the English gained the upper hand in the Anglo-Dutch wars of the mid-seventeenth century the young Dutch burgh settled into its freewheeling role as America&#39;s noisiest, most libertarian and most contentious city, New York.

This atmosphere of tolerance and widely noted unruliness bred up a unique maritime culture in New York. Professor Bob Albion (author of The Rise of New York Port , and much else besides- see SEA HISTORY 33 , page 8) examined this with us in the first James Monroe lecture , in 1968. He said: &quot; You have to posit an X factor to explain New York &#39; s takeoff in the period right after the Revolution. The location of the port, or any &#39;natural&#39; advantage doesn &#39; t do it alone . You have to find something in the people- their way of going at things . &quot; New York&#39;s position as the first city of the Americas has been sustained by that polyglot, changing population and intensely creative culture through the late twentieth century, when transportation advantages and indeed most of New York &#39; s maritime pre-eminence itself have passed away. Finally one must think there is something of those stubborn, contentious merchants and navigators living on in New York today . Hudson in 1609, poking into the river that came to bear his name , was SEA HISTORY, AUTUMN 1985