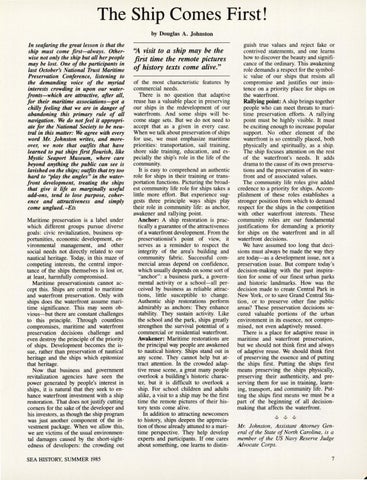 The Ship Comes First! by Douglas A. Johnston

In seafaring the great lesson is that the ship must come first-always. Otherwise not only the ship but all her people may be lost. One of the participants in last October&#39;s National Trust Maritime Preservation Conference, listening to the demanding voice of the myriad interests crowding in upon our waterfronts-which are attractive, after all, for their maritime associations-got a chilly feeling that we are in danger of abandoning this primary rule of all navigation. We do not feel it appropriate for the National Society to be neutral in this matter: We agree with every word Mr. Johnston writes, and moreover, we note that outfits that have learned to put ships first flourish, like Mystic Seaport Museum, where care beyond anything the public can see is lavished on the ships; outfits that try too hard to &#39;&#39;play the angles&quot; in the waterfront development, treating the ships that give it life as marginally useful add-ons, tend to lose purpose, coherence and attractiveness and simply come unglued. -ED. Maritime preservation is a label under which different groups pursue diverse goals: civic revitalization , business opportunities, economic development, environmental management, and other social needs not directly related to our nautical heritage. Today, in this maze of competing interests, the central importance of the ships themselves is lost or, at least, harmfully compromised. Maritime preservationists cannot accept this. Ships are central to maritime and waterfront preservation. Only with ships does the waterfront assume maritime significance. This may seem obvious-but there are constant challenges to this principle. Through countless compromises, maritime and waterfront preservation decisions challenge and even destroy the principle of the priority of ships. Development becomes the issue, rather than preservation of nautical heritage and the ships which epitomize that heritage. Now that business and government revitalization agencies have seen the power generated by people&#39;s interest in ships, it is natural that they seek to enhance waterfront investment with a ship restoration. That does not justify cutting comers for the sake of the developer and his investors, as though the ship program was just another component of the investment package. When we allow this, we are victims of the usual environmental damages caused by the short-sightedness of developers: the crowding out SEA HISTORY, SUMMER 1985

visit to a ship may be the fint time the remote pictures of history texts come alive.&quot;

of the most characteristic features by commercial needs. There is no question that adaptive reuse has a valuable place in preserving our ships in the redevelopment of our waterfronts. And some ships will become stage sets. But we do not need to accept that as a given in every case. When we talk about preservation of ships for use, we must emphasize maritime priorities: transportation , sail training, shore side training, education, and especially the ship&#39;s role in the life of the community. It is easy to comprehend an authentic role for ships in their training or transportation functions . Picturing the broadest community life role for ships takes a little more effort. But experience suggests three principle ways ships play their role in community life: as anchor, awakener and rallying point. Anchor: A ship restoration is practically a guarantee of the attractiveness of a waterfront development. From the preservationist&#39;s point of view, it serves as a reminder to respect the integrity of the area&#39;s building and community fabric. Successful commercial areas depend on confidence, which usually depends on some sort of &quot;anchor&quot;: a business park, a governmental activity or a school-all perceived by business as reliable attractions, little susceptible to change. Authentic ship restorations perform admirably as anchors : They enhance stability. They sustain activity. Like the school and the park, ships greatly strengthen the survival potential of a commercial or residential waterfront. Awakener: Maritime restorations are the principal way people are awakened to nautical history. Ships stand out in any scene. They cannot help but attract attention . In the crowded adaptive reuse scene, a great many people overlook a building&#39;s historic character, but it is difficult to overlook a ship. For school children and adults alike, a visit to a ship may be the first time the remote pictures of their history texts come alive. In addition to attracting newcomers to history, ships deepen the appreciation of those already attuned to a maritime perspective. They help develop experts and participants. If one cares about something, one learns to distin-

guish true values and reject fake or contrived statements, and one learns how to discover the beauty and significance of the ordinary. This awakening role demands a respect for the symbolic value of our ships that resists all compromise and justifies our insistence on a priority place for ships on the waterfront. Rallying point: A ship brings together people who can meet threats to maritime preservation efforts. A rallying point must be highly visible. It must be exciting enough to increase popular support. No other element of the waterfront is so centrally placed, both physically and spiritually, as a ship. The ship focuses attention on the rest of the waterfront&#39;s needs. It adds drama to the cause of its own preservations and the preservation of its waterfront and of associated values. The community life roles give added credence to a priority for ships. Accomplishment of these roles establishes a stronger position from which to demand respect for the ships in the competition with other waterfront interests. These community roles are our fundamental justifications for demanding a priority for ships on the waterfront and in all waterfront decisions. We have assumed too long that decisions must always be made the way they are today-as a development issue, not a preservation issue. But compare today&#39;s decision-making with the past inspiration for some of our finest urban parks and historic landmarks. How was the decision made to create Central Park in New York, or to save Grand Central Station , or to preserve other fine public areas? These preservation decisions secured valuable portions of the urban environment in its essence, not compromised , not even adaptively reused . There is a place for adaptive reuse in maritime and waterfront preservation, but we should not think first and always of adaptive reuse. We should think first of preserving the essence and of putting the ships first. Putting the ships first means preserving the ships physically, preserving their authenticity, and preserving them for use in training, learning, transport, and community life. Putting the ships first means we must be a part of the beginning of all decisionmaking that affects the waterfront.

www Mr. Johnston , Assistant A!tomey General of the State of North Carolina , is a member of the US Na vy Reserve Judge Advocate Corps. 7