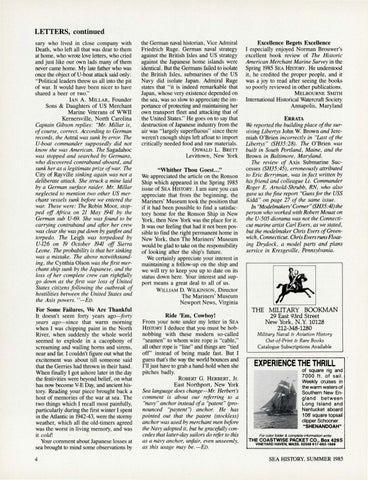 LETTERS, continued sary who lived in close company with Death , who left all that was dear to them at home, who wrote love letters, who cried and just like our own lads many of them never came home. My late father who was once the object ofU-boat attack said only: &quot;Political leaders threw us all into the pit of war. It would have been nicer to have shared a beer or two.&quot; IAN A. MILLAR , Founder Sons &amp; Daughters of US Merchant Marine Veterans of WWII Kernersville, North Carolina Captain Gibson replies: &quot;Mr. Millar is, of course, correct. According to German records, the Astral was sunk by error. The U-boat commander supposedly did not know she was American. The Sagadahoc was stopped and searched by Germans, who discovered contraband aboard, and sunk her as a legitimate prize of war. The City of Rayville sinking again was not a deliberate attack. She struck a mine laid by a German surface raider. Mr. Millar neglected to mention two other US merchant vessels sunk before we entered the war. These were: The Robin Moor, stopped off Africa on 21 May 1941 by the German sub U-69. She was found to be carrying contraband and after her crew was clear she was put down by gunfire and torpedo. The Leigh was torpedoed by U-126 on 19 October 1941 off Sierra Leone. The probability is that her sinking was a mistake. The above notwithstanding, the Cynthia Olson was the first merchant ship sunk by the Japanese, and the loss of her complete crew can rightfully go down as the first war loss of United States citizens following the outbreak of hostilities between the United States and the A.xis powers. &quot; -ED.

the German naval historian , Vice Admiral Friedrich Ruge. German naval strategy against the British Isles and US strategy against the Japanese home islands were identical. But the Germans failed to isolate the British Isles, submarines of the US Navy did isolate Japan . Admiral Ruge states that &quot;it is indeed remarkable that Japan, whose very existence depended on the sea, was so slow to appreciate the importance of protecting and maintaining her own transport fleet and attacking that of the United States.&quot; He goes on to say that destruction of Japanese industry from the air was &quot; largely superfluous&quot; since there weren&#39;t enough ships left afloat to import critically needed food and raw materials. OSWALD L. BRETT Levittown , New York

&quot;Whither Thou Goest .. !&#39; We appreciated the article on the Ronson Ship which appeared in the Spring 1985 issue of SEA HISTORY . I am sure you can appreciate that from the beginning, the Mariners&#39; Museum took the position that if it had been possible to find a satisfactory home for the Ronson Ship in New York, then New York was the place for it. It was our feeling that had it not been possible to find the right permanent home in New York , then The Mariners&#39; Museum would be glad to take on the responsibility of looking after the ship&#39;s future. We certainly appreciate your interest in maintaining a follow-up on the ship and we will try to keep you up to date on its status down here. Your interest and support means a great deal to all of us. WILLIAM D. WILKINSON &#39; Director The Mariners&#39; Museum Newport News, Virginia

For Some Failures, We Are Thankful It doesn&#39;t seem forty years ago-forty years ago-since that warm morning when I was chipping paint in the North River, when suddenly the whole world seemed to explode in a cacophony of screaming and wailing horns and sirens, near and far. I couldn&#39;t figure out what the excitement was about till someone said that the Gerries had th rown in their hand . When finally I got ashore later in the day the festivities were beyond belief, on what has now become V-E Day, and ancient history. Reading your piece brought back a host of memories of the war at sea. The two things which I recall most painfully, particularly during the first winter I spent in the Atlantic in 1942-43, were the stormy weather, which all the old-timers agreed was the worst in living memory, and was it cold! Your comment about Japanese losses at sea brought to mind some observations by 4

Ride &#39;Em, Cowboy! From your note under my letter in SEA HISTORY I deduce that you must be hobnobbing with these modem so-called &quot;seamen&quot; to whom wire rope is &quot;cable,&quot; all other rope is &quot;line&quot; and things are &quot;tied off&#39; instead of being made fast. But I guess that&#39;s the way the world bounces and I&#39;ll just have to grab a hand-hold when she pitches badly. ROBER!&#39; G. HERBER!&#39;, Jr. East Northport, New York Sea language does change-Mr. Herbert&#39;s comment is about our referring to a &quot;navy&quot; anchor instead of a &quot;patent&quot; (pronounced &#39;&#39;paytent&#39;j anchor. He has pointed out that the patent (stockless) anchor was used by merchant men before the Navy adopted it, but he gracefully concedes that latter-day sailors do refer to this as a ndvy anchor, unfair, even unseemly, as this usage may be. -ED.

Excellence Begets Excellence I especially enjoyed Norman Brouwer&#39;s excellent book review of The Historic American Merchant Marine Survey in the Spring 1985 SEA HISTORY . He understood it, he credited the proper people, and it was a joy to read after seeing the books so poorly reviewed in other publications. MELBOURNE SMITH International Historical Watercraft Society Annapolis, Maryland ERRATA We reported the building place of the surviving libertys John W. Brown and Jeremiah O&#39;Brien incorrectly in &quot;last of the libertys &quot; (SH35:28). The O&#39;Brien was built in South Portland, Maine, and the Brown in Baltimore, Maryland. The review of Axis Submarine Successes (SH35:45), erroneously attributed to Eric Berryman, was in fact written by his friend and colleague Lt. Commander Roger E. Arnold-Shrubb, RN, who also gave us the fine report &quot;Guns for the USS Kidd &quot; on page 27 of the same issue. In &quot;Mode/makers &#39; Comer&quot; (SH35:41) the person who worked with Robert Mouat on the U-505 diorama was not the Connecticut marine artist Carl Evers, as we stated, but the mode/maker Chris Evers of Greenwich, Connecticut. Chris Evers runs Floating Drydock, a model parts and plans service in Kresgeville, Pennsylvania.