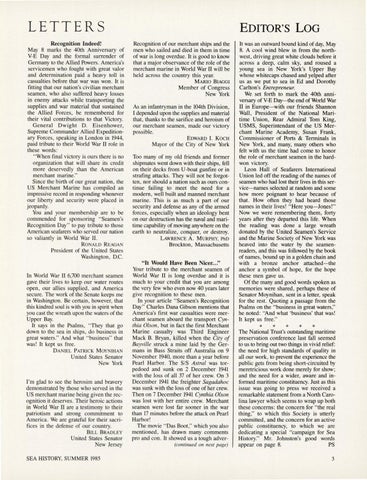 LETTERS Recognition Indeed! May 8 marks the 40th Anniversary of V-E Day and the formal surrender of Germany to the Allied Powers. America&#39;s servicemen who fought with great valor and determination paid a heavy toll in casualties before that war was won. It is fitting that our nation&#39;s civilian merchant seamen , who also suffered heavy losses in enemy attacks while transporting the supplies and war material that sustained the Allied Forces, be remembered for their vital contributions to that Victory. General Dwight D. Eisenhower, Supreme Commander Allied Expeditionary Forces, speaking in London in 1944, paid tribute to their World War II role in these words: &quot;When final victory is ours there is no organization that will share its credit more deservedly than the American merchant marine.&quot; Since the birth of our great nation, the US Merchant Marine has compiled an impressive record in responding whenever our liberty and security were placed in jeopardy. You and your membership are to be commended for sponsoring &quot; Seamen&#39;s Recognition Day&quot; to pay tribute to those American seafarers who served our nation so valiantly in World War II . RONALD R EAGAN

EDITOR&#39;S LOG Recognition of our merchant ships and the men who sailed and died in them in time of war is long overdue. It is good to know that a major observance of the role of the merchant marine in World War II will be held across the country this year. MARIO B IAGGI

Member of Congress New York As an infantryman in the 104th Division, I depended upon the supplies and material that, thanks to the sarifice and heroism of our merchant seamen, made our victory possible. EDWARD I. KOCH Mayor of the City of New York Too many of my old friends and former shipmates went down with their ships, fell on their decks from U-boat gunfire or in strafing attacks. They will not be forgotten , nor should a nation such as ours continue failing to meet the need for a modern , well built and manned merchant marine. This is as much a part of our security and defense as any of the armed forces , especially when an ideology bent on our destruction has the naval and maritime capability of moving anywhere on the earth to neutralize, conquer, or destroy. LAWRENCE A . MURPHY, PhD Brockton , Massachusetts

&quot; It Would Have Been Nicer...&quot; In World War II 6,700 merchant seamen gave their lives to keep our water routes open , our allies supplied , and America secure. The work of the Senate keeps me in Washington . Be certain , however, that this kindred soul is with you in spirit when you cast the wreath upon the waters of the Upper Bay. It says in the Psalms, &quot; They that go down to the sea in ships, do business in great waters.&quot; And what &quot; business&quot; that was! It kept us free. DANIEL PATRICK MOYNIHAN

United States Senator New York I&#39;m glad to see the herosim and bravery demonstrated by those who served in the US merchant marine being given the recognition it deserves. Their heroic actions in World War II are a testimony to their patriotism and strong commitment to America . We are grateful for their sacrifices in the defense of our country. BILL BRADLEY

Your tribute to the merchant seamen of World War II is long overdue and it is much to your credit that you are among the very few who even now 40 years later give recognition to these men . In your article &quot;Seamen&#39;s Recognition Day&quot; Charles Dana Gibson mentions that America&#39;s first war casualties were merchant seamen aboard the transport Cynthia Olson, but in fact the first Merchant Marine casualty was Third Engineer Mack B. Bryan, killed when the City of Bayville struck a mine laid by the Germans in Bass Straits off Australia on 9 November 1940, more than a year before Pearl Harbor. The SIS Astral was torpedoed and sunk on 2 December 1941 with the loss of all &#39;37 of her crew. On 3 December 1941 the freighter Sagadahoc was sunk with the loss of one of her crew. Then on 7 December 1941 Cynthia Olson was lost with her entire crew. Merchant seamen were lost far sooner in the war than 17 minutes before the attack on Pearl Harbor! The movie &quot; Das Boot,&#39; &#39; which you also mentioned , has drawn many comments pro and con. It showed us a tough adver(conrinued on next page)

It was an outward bound kind of day, May 8. A cool wind blew in from the northwest, driving great white clouds before it across a deep, calm sky, and roused a young sea in New York&#39;s Upper Bay whose whitecaps chased and yelped after us as we put to sea in Ed and Dorothy Carlton&#39;s Entrepreneur. We set forth to mark the 40th anniversary ofV-E Day-the end of World War II in Europe-with our friends Shannon Wall, President of the National Maritime Union, Rear Admiral Tom King, USMS, Superintendant of the US Merchant Marine Academy, Susan Frank, Commissioner of Ports &amp; Terminals in New York, and many, many others who felt with us the time had come to honor the role of merchant seamen in the hardwon victory. Leon Hall of Seafarers International Union led off the reading of the names of seamen who had lost their lives in this service-names selected at random and some how more poignant to hear because of that. How often they had heard those names in their lives! &quot;Here you-Jones!&quot; Now we were remembering them , forty years after they departed this life. When the reading was done a large wreath donated by the United Seamen&#39;s Service and the Marine Society of New York was heaved into the water by the seamenreaders, and this was followed by the book of names, bound up in a golden chain and with a bronze anchor attached-the anchor a symbol of hope, for the hope these men gave us. Of the many and good words spoken as memories were shared , perhaps these of Senator Moynihan, sent in a letter, speak for the rest. Quoting a passage from the Psalms on the &quot; business in great waters,&quot; he noted : &quot;And what &#39;business&#39; that was! It kept us free.&quot;

The National Trust&#39;s outstanding maritime preservation conference last fall seemed to us to bring out two things in vivid relief: the need for high standards of quality in all our work, to prevent the experience the public gets from being short-circuited by meretricious work done merely for show; and the need for a wider, aware and informed maritime constituency. Just as this issue was going to press we received a remarkable statement from a North Carolina lawyer which seems to wrap up both these concerns: the concern for &quot; the real thing,&quot; to which this Society is utterly committed , and the concern for an active public constituency, to which we are dedicating a special &quot;campaign for Sea History.&quot; Mr. Johnston&#39;s good words PS appear on page 8. 3