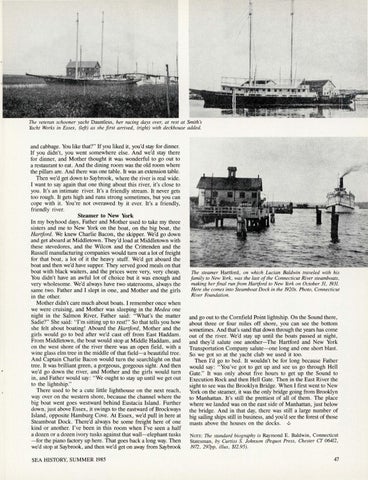 The veteran schooner yacht Dauntless, her racing days over, at rest at Smith&#39;s Yacht Works in Essex, (left) as she first arrived, (right) with deckhouse added.

and cabbage. You like that?&quot; If you liked it, you&#39;d stay for dinner. If you didn&#39;t, you went somewhere else. And we&#39;d stay there for dinner, and Mother thought it was wonderful to go out to a restaurant to eat. And the dining room was the old room where the pillars are. And there was one table. It was an extension table. Then we&#39;d get down to Saybrook, where the river is real wide. I want to say again that one thing about this river, it&#39;s close to you. It&#39;s an intimate river. It&#39;s a friendly stream . It never gets too rough. It gets high and runs strong sometimes, but you can cope with it. You&#39;re not overawed by it ever. It&#39;s a friendly, friendly river. Steamer to New York In my boyhood days, Father and Mother used to take my three . sisters and me to New York on the boat, on the big boat , the Hartford. We knew Charlie Bacon, the skipper. We&#39;d go down and get aboard at Middletown . They&#39;d load at Middletown with these stevedores, and the Wilcox and the Crittenden and the Russell manufacturing companies would turn out a lot of freight for that boat , a lot of it the heavy stuff. We&#39;d get aboard the boat and then we&#39;d have supper. They served good meals on that boat with black waiters, and the prices were very, very cheap. The steamer Hartford , on which Lucian Baldwin traveled with his You didn&#39;t have an awful lot of choice but it was enough and family to New York, was the last of the Connecticut River steamboats, making her final run from Hartford to New JVrk on October 31, 1931. very wholesome. We&#39;d always have two staterooms, always the Here she comes into Steamboat Dock in the 1920s. Photo, Connecticut same two. Father and I slept in one, and Mother and the girls River Foundation. in the other. Mother didn&#39;t care much about boats . I remember once when we were cruising, and Mother was sleeping in the Medea one night in the Salmon River, Father said: &quot;What&#39;s the matter and go out to the Cornfield Point lightship. On the Sound there, Sadie?&quot; She said: &quot;I&#39;m sitting up to rest! &quot; So that tells you how about three or four miles off shore, you can see the bottom she felt about boating! Aboard the Hartford , Mother and the sometimes. And that&#39;s sand that down through the years has come girls would go to bed after we&#39;d cast off from East Haddam . out of the river. We&#39;d stay up until the boats passed at night, From Middletown, the boat would stop at Middle Haddam , and and they&#39;d salute one another-The Hartford and New York on the west shore of the river there was an open field, with a Transportation Company salute-one long and one short blast. wine glass elm tree in the middle of that field-a beautiful tree. So we got so at the yacht club we used it too. And Captain Charlie Bacon would turn the searchlight on that Then I&#39;d go to bed. It wouldn&#39;t be for long because Father tree. It was brilliant green, a gorgeous, gorgeous sight. And then would say: &quot;You&#39;ve got to get up and see us go through Hell we&#39;d go down the river, and Mother and the girls would turn Gate.&quot; It was only about five hours to get up the Sound to in, and Father would say: &quot; We ought to stay up until we get out Execution Rock and then Hell Gate. Then in the East River the to the lightship.&quot; sight to see was the Brooklyn Bridge. When I first went to New There used to be a cute little lighthouse on the next reach , York on the steamer, it was the only bridge going from Brooklyn way over on the western shore, because the channel where the to Manhattan. It&#39;s still the prettiest of all of them. The place big boat went goes westward behind Eustacia Island . Further where we landed was on the east side of Manhattan, just below down, just above Essex , it swings to the eastward of Brockways the bridge. And in that day, there was still a large number of Island, opposite Hamburg Cove. At Essex , we&#39;d pull in here at big sailing ships still in business, and you&#39;d see the forest of those Steamboat Dock. There&#39;d always be some freight here of one masts above the houses on the docks. ..t kind or another. I&#39;ve been in this room when I&#39;ve seen a half a dozen or a dozen ivory tusks against that wall-elephant tusks NO&#39;fE: The standard biography is Raymond E. Baldwin , Connecticut -for the piano factory up here. That goes back a long way. Then Statesman , by Curtiss S. Johnson (Pequot Press, Chester CT 06412, 1972 , 297pp, illus, $12.95). we&#39;d stop at Saybrook, and then we&#39;d get on away from Saybrook SEA HIS1DRY, SUMMER 1985